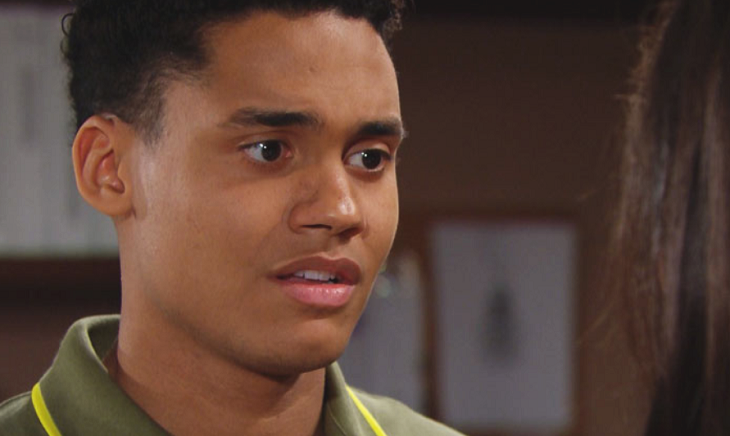 The Bold and the Beautiful spoilers for Thursday, August 15, tease that a familiar face will be back on canvas. Xander Avant (Adain Bradley) will return to Los Angeles in the wake of the big Beth Spencer (River Davidson and Madeline Valdez) reveal. Perhaps he’ll come back to support Zoe Buckingham (Kiara Barnes) as things are getting very difficult for her as well as the rest of the secret-keepers.

At any rate, Xander will be back, and he and Zoe will get pulled into a confrontation with Brooke Forrester (Katherine Kelly Lang) and Ridge Forrester (Thorsten Kaye). Brooke and Ridge are of course furious with Zoe, who has already been on the receiving end of their wrath. “Bridge” took Zoe’s driver’s license from her, so she can’t go anywhere, and she probably figures it would do no good to run at this point, anyway.

Brooke and Ridge are going to be seriously disappointed in Xander, who is supposed to be a family friend. The Avants have long been close to the Forresters and the Logans, so they’re going to want some answers from Xander about how he could even for a minute go along with the lies and deception.

Bold And The Beautiful Spoilers – Xander Avant Tries To Explain Himself

Of course, Xander will have some good answers for them. He’ll likely explain that he did try to tell Hope Logan (Annika Noelle) and Liam Spencer (Scott Clifton) about Beth’s existence, but he was stopped and threatened by Thomas Forrester (Matthew Atkinson). And he can offer Bridge some new information – about how he believed Thomas was dangerous and would follow through on his threats.

Perhaps Xander will fill in Bridge on how Thomas contributed to Emma Barber’s (Nia Sioux) death by chasing her, then didn’t even try to help her after the accident. Chances are, this will soften Bridge a little toward Xander, but it looks like he and Zoe will still have to pay some serious consequences for what they did.

But what will Bridge do to Xander and Zoe now? They may be fired from Forrester Creations – after all, nobody will want them to be around Hope and Steffy Forrester (Jacqueline MacInnes Wood) going forward. And they may even face legal action. Sure, neither of them committed overt crimes, but they did withhold important information about crimes that others committed.

Meanwhile, on Thursday’s episode of B&B, it appears that Bill Spencer (Don Diamont) will pay Liam and Hope a visit to see his granddaughter Beth. As B&B viewers know, Liam and Bill are just getting back onto good terms after a period of estrangement. Liam will agree to let Bill come and visit, and so the proud grandpa will come to greet the newest member of the Spencer family.

It looks like the men will enjoy some heartwarming scenes together. B&B viewers can expect them to share a nice moment together as Bill holds Beth and welcomes her to the fold. It looks like Will Spencer (Finnegan George) may join in the action as well, as he meets his little niece.

B&B viewers will remember that Bill was present on Catalina Island shortly after Reese Buckingham (Wayne Brady) told Hope and Liam that Beth had died. Bill witnessed firsthand how devastated the couple was, and so he’ll know what a blessing it is for them to have reclaimed their daughter.