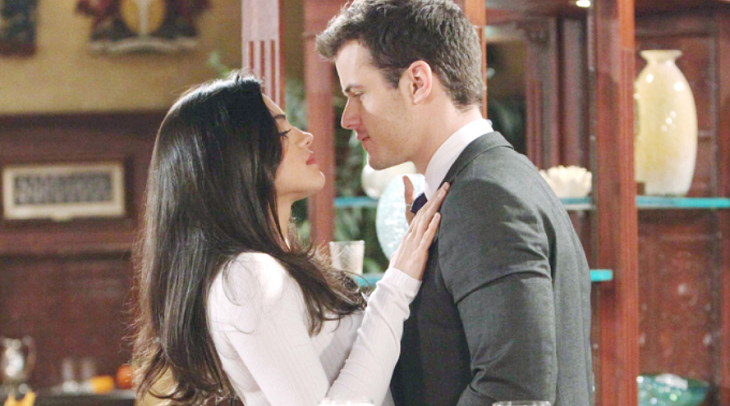 Fans of ‘The Young and the Restless’ understand that ‘Kola’ means Kyle Abbott (Michael Mealor) and Lola Rosales (Sasha Calle). These likable characters formed a promising pairing since first meeting last summer. But swirling issues surrounding both people could serve to damage their impending marriage.

But it isn’t just Kyle’s New York past that could cause chaos. Lola’s family issues could also intervene to derail the marriage that’s about to happen. And yes, that does imply and assume that the groom and bride complete the upcoming ceremony.

Kyle wanted to believe that whatever happened with Theo Vanderway (Tyler Johnson) was buried in the past. As recently stated by Mealor’s character, he paid money to cover over what took place with Theo and a young lady.

The coming arrival of Zoe Hardisty (Anna Grace Barlow) telegraphs as injecting further drama into this particular part of the storyline. Whether Zoe is the person in question, or she’s connected to that individual will soon be known.

Y&R fans know that the Kyle character was off the show when he was said to be living in New York earlier this decade. He clearly is enraged that Theo won’t let what happened remain buried. So there must be some pressing reason why Kyle’s enemy wants the truth to be known.

Eva LaRue (Celeste Rosales) was cast as the matriarch of Lola’s family. Her arrival in Genoa City, Wisconsin, earlier this summer was not something her daughter expected. Their clash eventually led to Celeste choosing to return to Miami, Florida, where her controversial husband and father of the Rosales’ children is living. The Rosales’ never divorced and have reconciled in more recent times. Lola wants her mom present for the wedding, but not her dad, Adrian Rosales (with casting yet to be known).

Young And The Restless Spoilers – Kola’s Longevity Is Being Questioned

Jack Abbott’s (Peter Bergman) offer to Kyle, that he’ll fly to Florida and convince Celeste to return to GC, winks hard at what’s to follow. Adrian is most likely to join Celeste, which will surely stir many emotions.

An easy and even predictable end to the ‘Kola’ marriage would have Kyle’s New York mystery produce something unexpected that proves too much for Lola to handle. He may have been married before, or has an unknown child. Backing off the intensely personal, Kyle may have helped Theo conceal a major crime that, when exposed, leads to jail time. That separation could spark ‘Kola’s’ physical separation.

But if a head fake is seen by the audience, then Lola’s back story will serve to split the married couple in the near future. Pressures applied by one, or both of her parents could lead to an unwanted outcome.

Fans of ‘The Young and the Restless’ rightfully express their opinions on a regular basis. So, will Kyle and Lola’s marriage be in trouble from the moment they say I do? Please vote in our poll below!