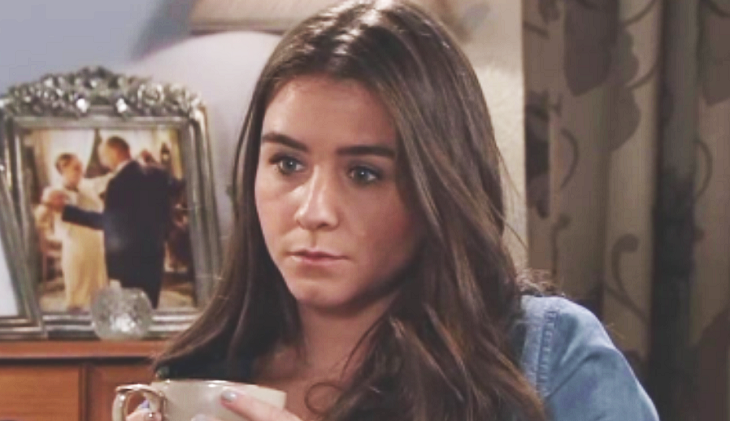 It looks like another fan favorite might soon be leaving the cobbles! As a matter of fact, there’s a new report that says Sophie Webster (Brooke Vincent) is looking to leave Weatherfield with Kate Connor (Faye Brooks) in the coming months. That’s because her portrayer Brooke Vincent is currently expecting and will soon be on her maternity leave. Here’s what you need to know.

According to Britain’s The Sun, restaurant manager Sophie will decide to leave Weatherfield after she gets a surprise inheritance. She realizes just how unhappy she is with her life and wants a change.

Sources behind the scenes say that Sophie’s exit will align with the return of her aunt Debbie, who was last seen in Weatherfield about 33 years ago.

“Debbie’s return is tinged with sadness as she returns to tell her brother Kevin about a death in the family,” the insider told the site. “But it’s not all bad news as with the death Debbie has come into a huge sum of money and she wants to share the wealth. She hands over a check for £200k for Kevin and the kids.

“After weeks of hearing Kate bang on about her travelling plans, Sophie realizes she has the perfect opportunity for her. She’s not fulfilled by her job and she’s growing tired of life on the street living with her dad and Jack,” the source added.

“Sophie decides to ask girlfriend Paula to take a career break and go with her to see the world and she’s stunned when she agrees.”

But here’s the thing: Paula Martin (Stirling Gallacher) will change her mind at the last minute and realize that she doesn’t want to leave everything behind to travel with Kate.

Meanwhile, Brooke Vincent has announced that she plans on leaving Coronation Street later this year as she prepares for the birth of her first baby with professional soccer player Kean Bryan.

Faye Brooks, meanwhile, has also announced that she is leaving the hit ITV soap in order to pursue other opportunities in the entertainment industry. We will definitely update you with more information as it comes in!