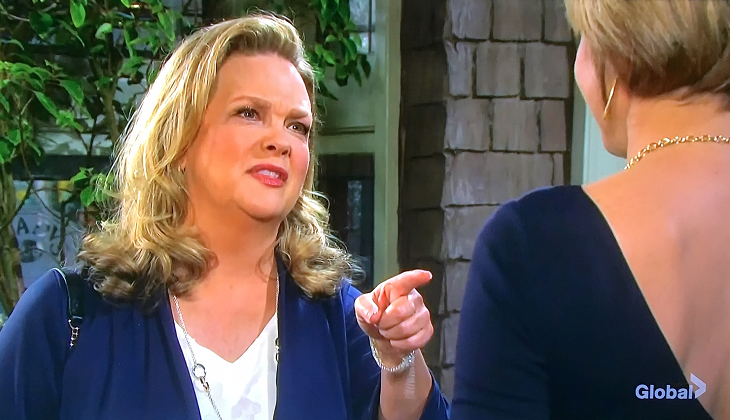 Days of Our Lives (DOOL) recap for Thursday, August 15, 2019, reveals Marlena Evans (Deidre Hall) is on the phone finalizing plans for the surprise party. John Black (Drake Hogestyn) stops by Doug’s Place to do that same.

Brady Black (Eric Martsolf) comes by Doug’s Place and speaks to Chloe Lane (Nadia Bjorlin). Chloe tells Brady that she sent Marlena to speak to Nicole Walker (Arianne Zucker). Chloe wants to know why Brady is thinking of Kristen Dimera (Stacy Haiduk) if he wants to have a relationship with Nicole. Chloe tells Brady about the two parties. Brady offers to help with it. They compare the guest lists. Brady says he can handle this and Chloe calls him a God.

Days of Our Lives Marlena stops by the pub and sees Anna DiMera (Leanne Hunley) there. Roman Brady (Josh Taylor) says she spent the night. Anna wants Marlena to talk to Nicole. Marlena explains that she already talked to Nicole and it didn’t go well.

Marlena offers to talk to Tony DiMera (Thaao Penghlis). Anna approaches Nicole, and after trading insults, vows to kill her. Roman breaks up the argument between Nicole and Anna. Marlena updates Anna on her conversation with Tony. Anna thinks Nicole has gotten into Tony’s head. Tony later arrives to speak to Anna, who claims to be marrying Roman.

Days of Our Lives Xander Cook (Paul Telfer) calls Nicole and demands to speak to her. Hope Brady (Kristian Alfonso) and John arrive at the Kiriakis mansion to question Xander. John and Hope tell Xander the police have evidence of him in Ted’s room. Xander was the last known person to see Ted alive. Hope and John feel that their plot is working. Xander listens to Kristen’s message and talks to John and Hope.

Days of Our Lives Kate Dimera (Lauren Koslow) runs into Tony Dimera (Thaao Penghlis) and wants to know if Nicole is still with her boy toy. Tony tells Kate she needs to keep quiet. Kate plans to approach Nicole herself. Marlena and Tony talk about the situation.

Tony claims to feel responsible for Nicole. Tony tells Marlena it isn’t time for him and Anna to be together just yet. Marlena knows something is keeping Tony from being with Anna. Marlena promises to give Anna his message. Kate calls Nicole and wants her to come to talk now. Nicole arrives and demands answers from Kate. Ciara and Ben are hiding under Nicole’s bed.

Days of Our Lives Brady hears Nicole’s phone go off and sees a missed call from Xander. Brady demands to know what Xander wants. Nicole has a meeting with Mr. Shin (Michael Hagiwara) that she needs to get to soon. Nicole cancels her meeting to meet Kate.

Days of Our Lives Ciara Brady (Victoria Konefal) and Ben Weston (Roberts Scott Wilson) are at the gatehouse. Ben is getting ready to break into Nicole’s room to get evidence. Ciara tells Ben he can’t do this, he will go to jail if he gets caught. Ben argues that he won’t get caught and promises to be careful. He arrives at Nicole’s room to find Ciara waiting for him. Ciara talked the maid into letting her in the room. Kate arrives before they can get finished searching.