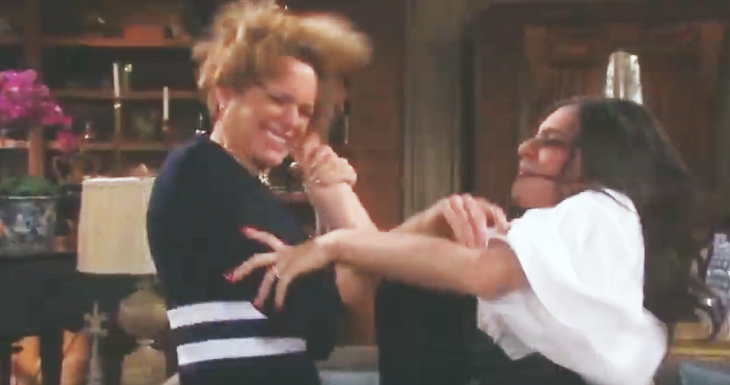 Of course, it’ll involve some manipulation on his part. Xander fears he’ll go down for Ted Laurent’s (Gilles Marini) murder if he doesn’t do something – and he’s certainly not going to let himself get thrown under the bus!

“Nicole DiMera” (Arianne Zucker) aka Kristen DiMera (Stacy Haiduk) is threatening to do just that, so Xander’s taking charge of the situation. He’ll give Hope and John a different side of the story on Friday. Naturally, Hope and John will have to take Xander’s info with a grain of salt. They know he’s not exactly the most truthful person around town, but they may get some useful “Nicole” clues anyway.

Other “Days of Our Lives” spoilers say Kate Roberts (Lauren Koslow) and “Nicole” will make a deal. Their meeting will continue to be overheard by trapped Ben Weston (Robert Scott Wilson) and Ciara Brady (Victoria Konefal).

DOOL fans know Ciara and Ben are stuck under the bed, but that’s already working out in their favor. They just got confirmation that Stefan DiMera (Brandon Barash) wasn’t the kidnapper.

Next, Ben and Ciara will listen in on the deal drama. It appears “Nicole” and Kate will scheme against Gabi as part of their plans for DiMera Enterprises. Afterward, chaos will erupt thanks to “Nicole” and Gabi’s vicious showdown. “Days of Our Lives” spoilers state that Gabi and “Nicole” will attack each other, which will spell big trouble for Kristen.

Gabi will rip “Nicole’s” mask off, but Kristen won’t stand by and let Gabi ruin things for her. “Days” spoilers say Kristen will knock Gabi out cold along with Stefan, who’ll get caught up in all this. Stefan’s efforts to save Gabi will earn him his own blow to the head, so Kristen will have two more hostages on her hands.

Across town, Roman Brady (Josh Taylor) will reluctantly sign on for Anna DiMera’s (Leann Hunley) marriage plot. He’ll know this is really about making Tony DiMera (Thaao Penghlis) jealous and jolting him into a divorce. Roman still won’t like this, but he cares about Anna and her happiness. He’ll do his part, so Anna will hope her strategy pays off!

It sounds like some great scenes are coming up. We’ll give you updates as other “Days” news and rumors emerge. Stay tuned to DOOL and don’t forget to check Hollywood Hiccups often for the latest “Days of Our Lives” spoilers, rumors, updates and news.