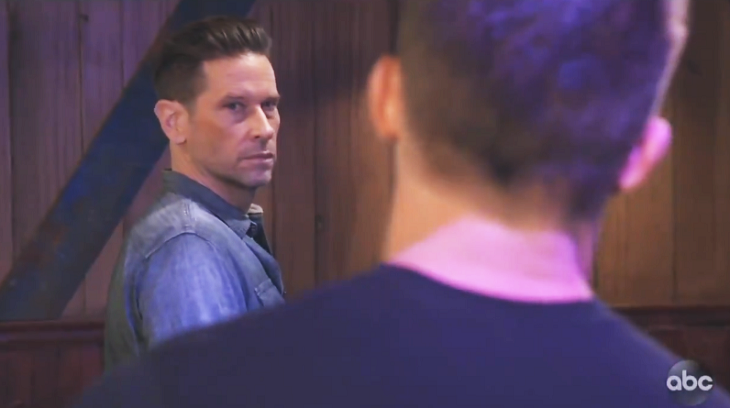 Jason tells Robert and Sam that Franco had no baseline of his memories; it’s either Drew’s memory or a vegetative state. Sam and Jason wouldn’t wish memory mapping on their worst enemy. Jason will never forget what Franco did to Sam or Michael, but Jason believes they need to give Franco credit for saving Cameron Webber (William Lipton).

Sam wonders if Franco can tell Drew about his past now. Sam goes to the hospital and speaks to Liz Webber (Rebecca Herbst) and Drew and expresses sympathy for what happened. Drew tells Liz that Franco is in there, they need to give him a reason to come back to them.

General Hospital’s Franco, believing he is Drew, flirts with Kim Nero (Tamara Braun). Franco grabs Kim and kisses her. Kim pushes Franco away and wonders what the hell he is doing. Franco tells Kim another memory and asks if she forgot. Liz and Drew come over to Franco and Kim. Liz tells Franco he is upsetting Kim. Franco takes off, and Kim demands to know what is going on with Franco.

Liz and Drew explain how Franco saved Cameron and did the memory transfer himself. Franco goes to the Floating Rib for a drink. Maxie West calls him Franco, and he throws a glass breaking it. Peter August (Wes Ramsey) takes care of the damage and buys Franco a beer. Maxie wonders what happened. Peter thinks he knows. Peter suggests that Franco had the memory transfer. Peter tells Maxie he thinks Drew’s memories were implanted in Franco. Peter blames himself, and Maxie disagrees. Jason goes to the Floating Rib to see Franco.

General Hospital’s Lucas Jones (Ryan Carnes) questions why Julian Jerome (William DeVry) would leave town with Kim when she is planning to leave without him. Brad Cooper (Parry Shen) arrives, and Lucas tells him about Julian’s plans. Lucas heads to work Brad stays behind to speak to Julian. Brad tells Julian he is screwed if Julian leaves. Julian tells Brad the best thing to do about Wiley Cooper-Jones (Theo and Erik Oslenis nothing.

Brad arrives at the hospital and starts messing with the computer, Lucas catches him. Kim stops by Charlie’s, and Julian asks what is wrong, she doesn’t know where to start. Lucas looks at the computer and asks why Brad is looking at Shiloh’s medical records. Wiley’s heart condition isn’t showing in the records. Lucas suggests that Shiloh lied on his medical records.

General Hospital’s Jasper Jax (Ingo Rademacher) pays the tab before approaching Maxie and Peter’s table. Jax hears Maxie and Peter talking about Liesl Obrecht (Kathleen Gati) having a crush on him. Maxie tells Jax that Liesl is trying to turn her life around. Jax promises to be nice to Liesl. Jax sends Hayden a message to get out of Windemere. Jax arrives at the hospital and wants to speak to Nina. Valentin tells Jax he will be there for Nina from now on when she needs someone.

General Hospital’s Liesl catches Hayden Barnes at Windemere and threatens to call the police. Hayden argues that she had permission to be there to look for her earring. Hayden tells Liesl not to call Nina. Liesl demands to know how long she has been there.

Liesl saw a boat speeding away from the island and demands answers. Hayden receives a text and Liesl grabs the phone and sees Jax’s text. She wants to know why Jax is working with Hayden. Liesl clears Hayden’s phone history and threatens to call the cops. Hayden promises to get Jax to have dinner with her if Liesl lets her go.