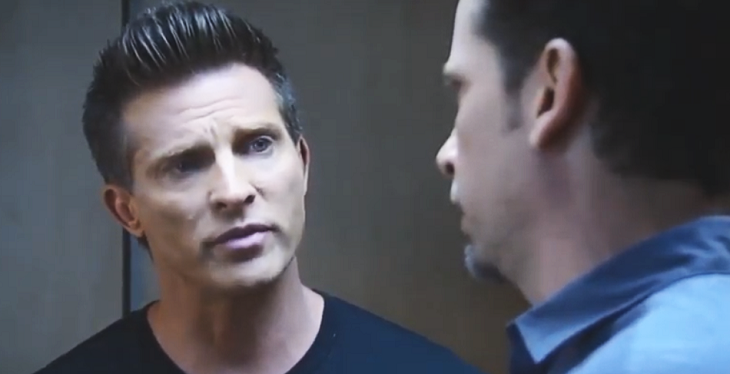 General Hospital viewers will recall that Jason, along with Sam McCall (Kelly Monaco) met with Robert Scorpio (Tristan Rogers) and spoke about Shiloh’s past in Afghanistan, among other things. Jason and Sam will by now undoubtedly know that the memory transfer into Franco of Drew’s memories was successful. And even though Franco needs himself and his own memories back, it makes sense to try to get him to talk as pre-2012 Drew for intel on what really happened over in Afghanistan.

This is to make sure that Shiloh is charged with as many crimes as possible to make him freedom proof. But will Franco, mentally as a decorated Navy Seal named Drew Cain, give Jason anything except a hard time about stealing his face? General Hospital viewers will recall that neither Jason nor Drew knew anything about having a twin prior to relatively recently, thanks to Heather Webber (Robin Mattsson) and her baby swapping and stealing antics of the past.

Since Franco believes he is Drew, his perceived Navy Seal training may not allow him to speak to Jason, being a civilian, about what he may consider is classified information. General Hospital viewers will recall that the real Drew was ready to turn Shiloh in for treason over his theft of fuel from US Navy installations in Afghanistan and selling it to enemy insurgents.

But post-2012 Drew had requested Charles “Tex” Owens’ military records to get some clues about what went down back then. Of course now he could ask Franco, but he may run into the same secrecy about classified information as Jason likely will. It may actually come to the real Drew contacting someone from the Navy to question Franco, but will they believe it when he tries to explain who Franco is and why he thinks he’s Drew?

Perhaps Dr. Kevin Collins (Jon Lindstrom) could try hypnotism to bring Franco’s memories to the surface. But before he does that or his memory expert friend is brought in on the case, Jason and the real Drew need to get Franco to spill what he knows about Shiloh and what happened in Afghanistan.

They also need to find out what he might remember about when he was abducted in Afghanistan and put into the memory mapping experiment to begin with. Although there is a distinct possibility that he may not remember any of that – Jason didn’t either.

Do you think Franco will remember Liz?https://t.co/wi5PdlGOjg

Perhaps Robert should bring some WSB people in, as a Seal may talk to a representative of a spy agency who has the same interests for bringing Shiloh to justice as NCIS would have. Franco, for the time being, is Navy Seal Andrew Cain for all intents and purposes, and will have to be convinced that he can talk about the case!