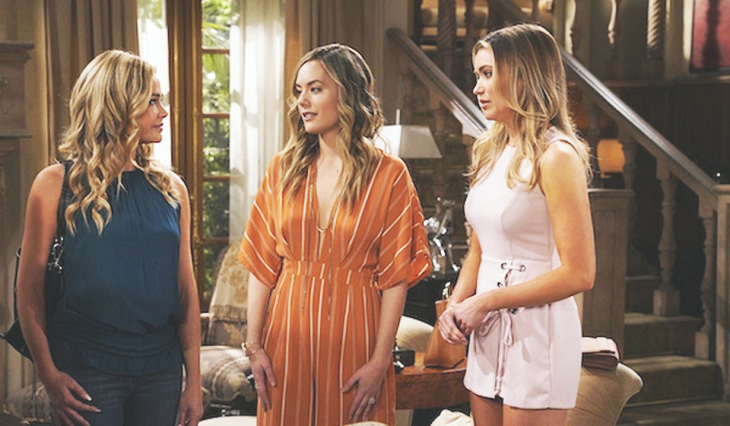 The Bold and the Beautiful spoilers for Friday, August 16, tease that Hope Logan (Annika Noelle) will be in for a big surprise. As B&B viewers know, she’s been enjoying her time with Liam Spencer (Scott Clifton) and Beth Spencer (River Davidson and Madeline Valdez) since the big reveal. She really hasn’t spent much time thinking about those who were responsible for all of her pain and suffering over the past few months, but that’s about to change.

According to B&B spoilers, Florence “Flo” Fulton (Katrina Bowden) and her mother Shauna Fulton (Denise Richards) will decide to do something risky. They’ve been waiting around ever since Ridge Forrester (Thorsten Kaye) and Brooke Forrester (Katherine Kelly Lang) called them out for their role in keeping Beth from Hope and Liam. Ridge took their driver’s licenses and so they can’t flee, so they’ve got to stick around and face the music.

But it seems that they’ll feel that they need to talk directly to Hope and explain themselves. They know that they are in serious trouble, and that Flo in particular is looking at some serious legal consequences for her actions in Reese Buckingham’s (Wayne Brady) illegal adoption scam. They’ll apparently be feeling nervous about everything and they’ll want to talk to Hope directly.

Perhaps Flo and Shauna will think that they can get Hope to understand their point of view and why they did what they did. At any rate, B&B spoilers say that they’ll decide to sneak into Hope’s cabin and essentially ambush Hope so they can explain their side of the story. It seems like a terrible idea, but in their panicked state, it will seem to make sense.

Bold And The Beautiful Spoilers: What Consequences Will Xander Face When He Returns?

They may think that Hope will decide to have some sympathy for what they’ve gone through and how they were manipulated into keeping quiet about Beth by Reese and Thomas Forrester (Matthew Atkinson). At any rate, they’ll end up sneaking onto the property and make their way to the cabin where Hope lives. They’ll hope for the best as they prepare to come face to face with the person their actions hurt the most.

From here, things are going to be a disaster for Flo and Shauna. Hope will be furious to find them at her cabin, and she’ll demand to know how they got there. They’ll have to admit that they snuck their way onto the property, which will probably make Hope angrier than she would have been otherwise.

Bold And The Beautiful Spoilers – Hope Forrester Not Interested In Excuses

According to B&B spoilers, Hope will unleash her anger on Flo as Flo tries to apologize for everything she did. It doesn’t look like Hope is going to be interested in hearing Flo’s “reasons” for why she did what she did, and they’ll only come across sounding like excuses.

Of course, this will be the first time that Hope’s had the opportunity to rage at anyone who participated in the baby swap and adoption scam, so Flo’s probably going to take some serious abuse, and rightly so. B&B viewers can expect to see a heated scene as Hope lets Flo have it.

Well, as it turns out, Hope will have some backup. Look for the Logan sisters to descend upon the scene as well. Katie Logan (Heather Tom), Brooke, and Donna Logan (Jennifer Gareis) will arrive shortly after Flo and Shauna, and while Hope is lashing out at Flo, the Logan sisters will take on Shauna. They’ll blast Shauna for encouraging her daughter to keep quiet about Beth’s existence all for personal gain.

Katie, Brooke, and Donna may not let Shauna get a word in edgewise, even though she’ll probably offer a string of excuses for why she wanted to protect Flo’s standing in the Logan family. Don’t expect that to go over well, though, and look for Shauna to take a serious lashing at the hands of the Logan sisters.

In the end, it looks like Flo and Shauna will be no match for Hope and the Logans, and B&B viewers will get to witness Hope on the warpath against those who caused her so much pain. It certainly doesn’t look like Flo and Shauna’s plan to explain themselves will work out well for them – in fact, they will probably only succeed in making Hope and her family angrier at them!