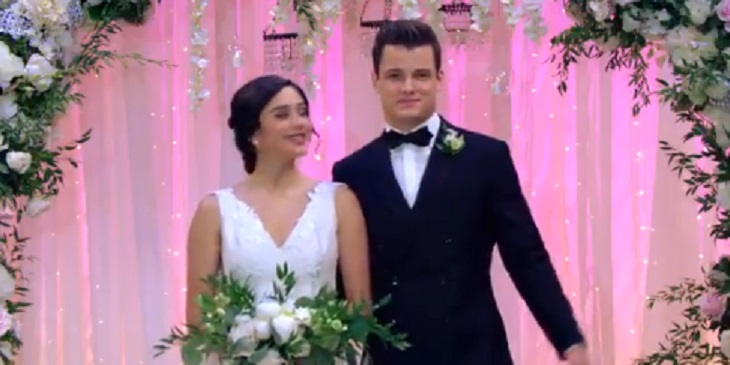 “The Young and the Restless” spoilers for Friday, August 16, tease that Kyle Abbott (Michael Mealor) will have a case of cold feet. At Crimson Lights, Kyle receives an ominous text from Theo Vanderway (Tyler Johnson). After Theo insists it’s the end of life as Kyle knows it, the groom is filled with fear.

At the Abbott mansion later, Kyle doesn’t think he can go through with this. He talks to Traci Abbott (Beth Maitland) and Ashley Abbott (Eileen Davidson) about their family’s track record of marriage failures. Kyle doesn’t feel he’s good enough for Lola Rosales (Sasha Calle). He thinks she deserves a man who will protect her heart and make her truly happy, but Ashley and Traci are certain Kyle’s that man.

Meanwhile, Summer Newman (Hunter King) surprises Phyllis Summers (Michelle Stafford) by revealing she’ll be at the wedding. Phyllis doesn’t get it since Kyle hurt Summer deeply, but Summer feels she hurt him as well. She insists on going, so Phyllis decides she’ll be her plus one.

Young and the Restless Spoilers – Billy Haunted By Delia’s Doll

At home, Billy Abbott (Jason Thompson) is distracted by a flashback of Delia Abbott’s (Sophie Pollono) doll. Victoria Newman (Amelia Heinle) wonders if he’s all right, so Billy promises he is. Near the wedding venue, Lola gets some assistance from her girl squad. Abby Newman (Melissa Ordway), Mariah Copeland (Camryn Grimes) and Tessa Porter (Cait Fairbanks) are all there to support her.

Even cold feet can’t hinder true love. ❤️ It’s the wedding of the year this week on #YR! pic.twitter.com/mOIV0c3jnN

Later, Lola opens presents to honor a wedding tradition. Something old is a vintage purse from Mariah, and something new is Ashley’s latest fragrance. Abby’s diamond earrings are something borrowed, and Tessa hands over a blue garter as something blue. Lola’s grateful to the gang and they bring it in for a group hug.

After Rey Rosales (Jordi Vilasuso) arrives, he chats with his sister briefly and marvels at how fast she grew up. Rey’s proud of Lola, and she considers him a good role model and the best brother she could ask for.

In the Chancellor Pavilion, guests start making their way over for the big event. Devon Hamilton (Bryton James) and Elena Dawson (Brytni Sarpy) are there along with Billy and Victoria. Kyle, Ashley, Traci and Nate Hastings (Sean Dominic) file in next. As for Phyllis and Summer, they take their seats toward the back and prepare for Summer’s suffering.

Jack Abbott (Peter Bergman) also finds Kyle and hints at some news. We see what that news is when Celeste Rosales (Eva LaRue) surprises her daughter in the prep area. Celeste is sorry for nearly staying away and patches things up with Lola. She wants her mom to walk her down the aisle with Rey.

Young and the Restless Spoilers – Adrian Rosales Crashes The Wedding

The wedding march eventually plays, but Celeste notices someone nearby as the ceremony starts. She sneaks off to confront the wedding crasher, who turns out to be Lola’s father. Adrian Rosales suggests he couldn’t miss Lola’s nuptials, but Celeste remains incensed. As their argument wraps up, Celeste warns Adrian not to ruin this for Lola and rejoins the crowd.

The Young and the Restless Spoilers Friday, August 16: Lola’s Dad Shows Up At The Wedding – Kola Get Married Not Knowing He’s There @SoapOperaSpy #yr #youngandrestless https://t.co/OJInK4luzK

Back with Kyle and Lola, they say some sweet vows before the ring exchange. They’re ultimately pronounced husband and wife, so they share their first kiss as Mr. and Mrs. Abbott. “The Young and the Restless” spoilers say Theo and Zoe Hardisty (Anna Grace Barlow) will cause drama in the week ahead, so stay tuned. We’ll give you updates as other news and rumors emerges. Don’t miss this wedding extravaganza!