Young And The Restless Spoilers: Will Jack And Victor Bond Over His Dire Diagnosis? 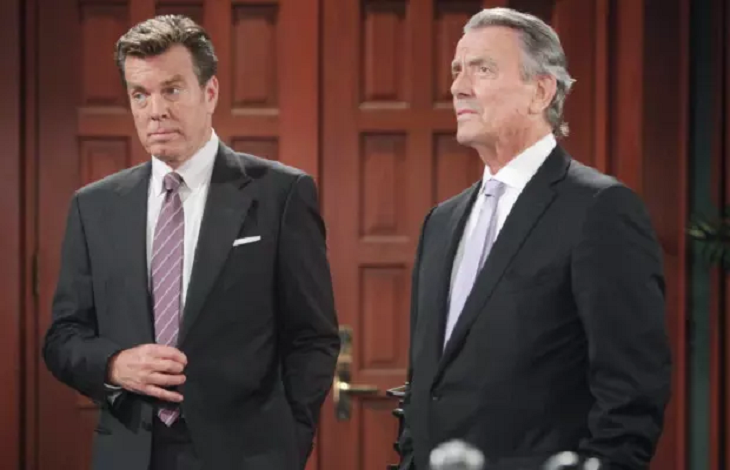 The Young and the Restless spoilers tease that Jack Abbott (Peter Bergman) and Victor Newman (Eric Braeden) have another bonding session this week. This latest thaw in the relationship between longtime enemies doesn’t necessarily mean that Y&R is shifting strategy by having them become friendly with each other. But that seemingly impossible outcome is becoming possible.

Jack took note of Victor’s apparent lessened mental state earlier this summer. He saw that Braeden’s character believed, for a moment, that it was a different time of day than it actually was while having a family dinner at Society.

Impacted deeply by all that’s happened to Dina Mergeron (Marla Adams), Jack appears to have actual sympathy for the Mustache. It isn’t forgotten that Victor has been genuinely kind when referring to Jack’s mother and her condition the past year-plus. Combine those elements and it’s possible that viewers are starting to see a shift in the dynamic between these age-old combatants.

Young And The Restless Spoilers – Many Significant Battles Between The Two

Hardcore viewers recall the many instances were Victor and Jack have gone at each other, often by using their businesses as proxies for personal grudges. Significantly altering that dynamic, or even reversing it would surely be opposed by those within the audience who would find such changes illogical.

Victor and Jack’s battle for Nikki Newman (Melody Thomas Scott) infamously involved Victor’s accidental knock of her down the original Newman Ranch stairs while she was pregnant with Jack’s baby, who was lost, was just one memorably dramatic event. In another, Jack left Victor for dead at the Colonnade room. Years later Victor employed life-saving measures to Jack, who was affected by The Underground collapse.

The rancor between the Newman’s and Abbott’s has sometimes been centered on Victor’s romantic links to Jack’s sister, Ashley Abbott (Eileen Davidson). Of course, Abby Newman (Melissa Ordway) is a genetic link between both families.

Victor naturally hasn’t told the world about his rare blood disease. His recent call to Jack from the Jabot parking garage was purely out of need. But it didn’t serve to reveal Victor’s condition, as the Black Knight’s instincts compel him to believe that Jack would seek to capitalize on this weakened state.

Braeden has publicly announced that he plans to remain with Y&R indefinitely. So, Victor will beat this disease, or be shown to live with it. The intriguing part of this developing storyline is that the writing staff is repeatedly positioning Jack near Victor, which makes it increasingly likely that the dire diagnosis will be revealed.

While it would be controversial, having Jack and Victor form a bond through this situation would provide fresh plot ground. It is a creative path that can be taken and likely would prove to be entertaining.

Hollywood Hioccups is a leading source for everything linked to The Young and the Restless. Check back regularly for Y&R spoilers and news!