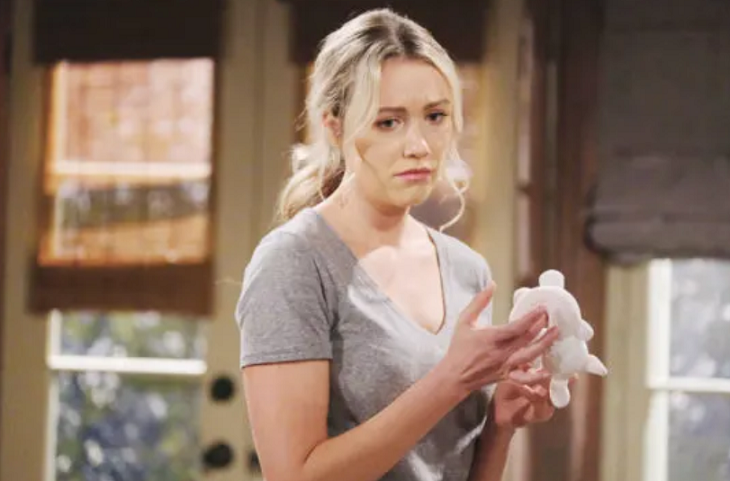 The Bold and the Beautiful spoilers for Monday, August 19, tease that Florence “Flo” Fulton (Katrina Bowden) will find herself in a couple of bad situations. As B&B viewers know, she’s just asked Hope Logan (Annika Noelle) for forgiveness after explaining why she went along with Reese Buckingham’s (Wayne Brady) baby swap and adoption scam and then kept the secret for months. It doesn’t look like Hope’s going to be receptive to her plea, and she might just throw her out of the cabin.

According to B&B spoilers, Flo will soon have much more to worry about than Hope’s rejection. Until now, Ridge Forrester (Thorsten Kaye) and Brooke Forrester (Katherine Kelly Lang) have just ranted and raved at Flo and Shauna Fulton (Denise Richards), but they haven’t actually done anything to make Flo pay for her crimes.

Well, on Monday’s episode, that’s all going to change, as Ridge and Brooke turn their attention to Flo and her crimes. Now that Reese has been arrested and the wheels of justice are turning for him, it will be Flo’s turn to deal with the law. Flo didn’t actually come up with the plan to kidnap Beth Spencer (River Davidson and Madeline Valdez), but she knew about it and concealed the truth for months. Plus, she participated in an illegal adoption.

Bold And The Beautiful Spoilers – Detective Sanchez Returns To Investigate

It appears that Brooke and Ridge will start their revenge against Flo by calling in the cops to investigate her involvement in what happened with Beth, since Detective Alex Sanchez (Jeremy Ray Valdez) will make an appearance on Monday’s B&B episode. He’ll likely want to question Flo about what she knew and did and didn’t do, and that’s going to leave Flo panicked.

This should be very interesting… #BoldandBeautiful pic.twitter.com/JqIR0BnQwE

According to B&B spoilers, Shauna will be horrified when she realizes that Brooke and Ridge are serious about Flo getting what she deserves. Shauna may beg for mercy for her daughter, but once the police get involved, things will be out of “Bridge’s” hands. But Detective Sanchez will be on canvas for the next few weeks, so it looks like the investigation will take some time.

Meanwhile, on Monday’s new episode of B&B, Wyatt Spencer (Darin Brooks) will be feeling ambivalent. As B&B viewers know, he kicked Flo to the curb shortly after she revealed the truth about Beth’s kidnapping and illegal adoption to Steffy Forrester (Jacqueline MacInnes Wood). Wyatt hates secrets in relationships, and he just couldn’t go on with Flo after he learned the truth.

But it probably won’t be easy for Wyatt to just turn off his strong feelings for Flo. She was his first love and high-school sweetheart, and it’s not like he’ll suddenly stop loving her. He might find himself thinking about the good times he and Flo had together and wonder if there’s any way they could get back to a good place.

Wyatt might find himself worrying about the legal ramifications for Flo, especially since she’ll be dealing with the cops soon. He’ll probably realize that Flo could spend hard time in prison for her actions, and that could concern him. Perhaps he’ll start to feel some sympathy for Flo, while at the same time feeling angry toward her for what she did to the people he cares about.

Of course, Wyatt will know that once the police get on Flo’s case, anything could happen to her. She could wind up facing prison time and might have to agree to a plea deal in order to serve less time. Wyatt probably won’t want to see her behind bars, even though he’ll know at some level that she’ll have to pay for what she did.