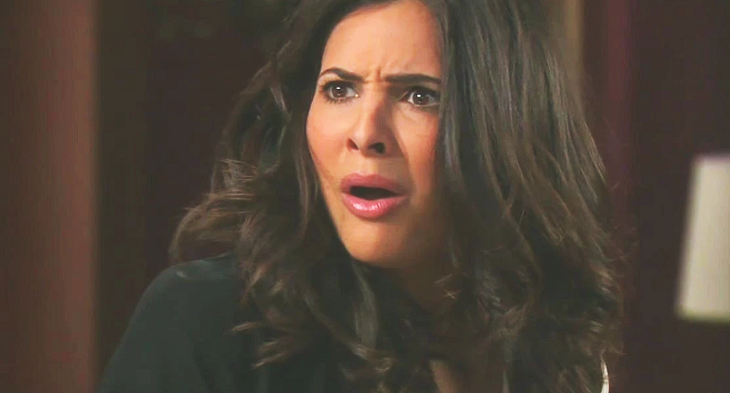 Anna tells Tony he is too late, she is marrying Roman Brady (Josh Taylor). Anna grabs Roman and kisses him in front of Tony. Tony tells Anna this isn’t real and that she doesn’t love Roman. Anna said she didn’t realize Tony was alive and wanted to move on with her life. Anna preaches Roman’s praises to Tony. Roman goes along with Anna’s story and then says they broke up.

Anna says they got back together and are getting married. Tony asks Roman if he’s going to marry Anna. Roman says they didn’t get it right the first time and he believes in second chances. Tony is going to fight for Anna. Anna demands Tony divorce Nicole. Shen then says may the best man win and tells Tony she and Roman may elope. Roman wants to know what happens if Tony doesn’t divorce Nicole. Tony thinks about Kristen’s threat while looking at Anna’s photo.

Days of Our Lives Gabi DiMera (Camila Banus) goes to the police station and noses through Rafe Hernandez’s (Galen Gering) file on Ted Laurent’s (Gilles Marini) murder. She asks Rafe about the mystery woman and tells him they need to find her. Gabi wants justice to be serviced, she claims. Rafe tells Gabi she is in love with Stefan. Gabi disagrees with Rafe. Rafe knows Gabi is going to do whatever she wants, and he hopes it works out. Gabi texts Stefan after rethinking Rafe’s statement.

Days Of Our Lives Spoilers: Brady Confesses To Eric He’s Back Together With Nicole

Days of Our Lives Xander Cook (Paul Telfer) tells John Black (Drake Hogestyn) and Hope Brady (Kristian Alfonso) they will be shocked by who is behind the kidnapping. Xander wants a new deal. John and Hope tell Xander if he tells them the truth, they can help him stay out of prison. John and Hope want a name, Xander won’t give it to them.

Hope and John decide to see if Rafe can help make a deal for Xander. Hope tells Xander to come to the station with them. Xander tells Rafe he lied because he feared for his life. Stefan stops by the station to check on the case. Rafe tells Stefan that Xander is backing off his story. Rafe thinks Stefan and Gabi need to grow up and admit their feelings. Hope and John are in the square, questioning how to locate the mystery woman. Ben and Ciara quickly approach them eager to share their evidence.

Days of Our Lives Kate DiMera (Lauren Koslow) tells Nicole Walker (Arianne Zucker) that either she or the person forcing her to help with this knocked her out. Kate wants to team up with Nicole. Mr. Shin (Michael Hagiwara) calls Nicole and is very upset with her. Nicole has to leave. Kate says they aren’t finished. Nicole threatens to tell Kristen what she is up to because she’s out to protect herself and leaves.

Ben Weston (Robert Scott Wilson) and Ciara Brady (Victoria Konefal) come out from under the bed and offer to help. They tell Kate they are working for Stefan Dimera (Brandon Barash) and she should work with him. Kate says she is as good as dead and threatens to call security on them. Nicole bursts into the DiMera mansion, demanding to know where Shin is. Kate calls Xander, wanting to speak to Kristen ASAP. Nicole accuses Gabi of keeping Shin from talking to her. Nicole calls Gabi a scheming little bitch. Gabi realizes Nicole framed Stefan for murder and accuses her of killing Ted. Nicole accuses Gabi of being crazy and the women fight. Gabi pulls off Nicole’s mask, exposing Kristen.

Days of Our Lives Spoilers: Anna And Roman's Engagement Ruffles A Few Feathers In Salem https://t.co/NiiGLPRxlK

Days of Our Lives Stefan hears Mr. Shin on the phone with Nicole. Stefan tells Shin that Nicole killed Ted, not him and he is working on evidence to prove it. Stefan and Mr. Shin go to the park. Stefan wants Shin to get rid of Nicole. Shin offers to put off Nicole a little longer but he warns Stefan that Gabi is about to bring DiMera down. Ben and Ciara meet Stefan and tell him that Kate is up to her eyeballs in this. Ben and Ciara tell Stefan that someone else is involved besides Kate and Nicole.