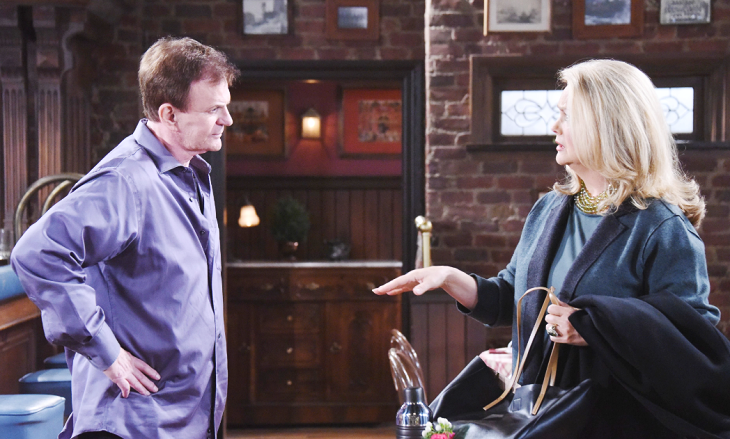 Days of Our Lives (DOOL) spoilers tease that Anna DiMera (Leann Hunley) will be feeling vengeful. As DOOL viewers know, she was shocked to learn that the love of her life, Tony DiMera (Thaao Penghlis) is alive and well.

Of course, Tony was supposed to have died ten years ago, so Anna was naturally irked to find out that he’s been out there for a decade and hasn’t tried to make contact with her.

Anna just happened to return to Salem right at this time, because she wanted to lay Tony’s ashes to rest in the DiMera mausoleum. She had no idea that Tony was alive, and she was stunned to come face-to-face with him in Horton Square. Of course, Anna’s also peeved because Tony is married to another woman – “Nicole Walker” (Arianne Zucker).

And it’s not like Tony can just tell Anna everything that’s going on behind the scenes. As DOOL viewers know, his marriage to “Nicole” is a scam because Nicole is actually Kristen DiMera (Stacy Haiduk) in disguise. And Kristen is now threatening to kill Anna if Tony reveals that their marriage is a sham. It’s a big mess, and Tony’s in deep.

Well, it appears that Anna will decide that enough is enough, and she will hurt Tony in the only way that she can at this point…she’ll announce that she’s getting married herself! And to her ex, Roman Brady (Josh Taylor)! According to DOOL spoilers, Anna will somehow convince Roman to become engaged to her, and they’ll plan a sham marriage of their own.

It looks like Roman won’t be too happy to be a part of Anna’s ploy to make Tony jealous. But according to DOOL spoilers, he’ll reluctantly go along with the plot to make Anna happy and help her achieve her goal of eventually getting Tony back.

We’ll see what happens going forward, as Anna and Roman plan their wedding, and Tony tries to figure out how to get out of his marriage to “Nicole” without putting Anna in harm’s way. According to DOOL spoilers, Kristen will eventually be revealed, so it looks like Anna will at some point learn the truth about Tony’s marriage.

Days of Our Lives Spoilers: Will Marlena Get Tony and Anna Back Together? https://t.co/B83G33zQLY pic.twitter.com/NPfBYbx66Z

But will Anna be willing to accept Tony at that point, knowing that he was involved with Kristen in her plot to destroy lives in Salem? Time will tell, but it looks like at least the path will be cleared for Anna and Tony to get back together. Do you think they’ll reunite when this whole Kristen mess is through?