Days Of Our Lives Spoilers: Brady Confesses To Eric He’s Back Together With Nicole 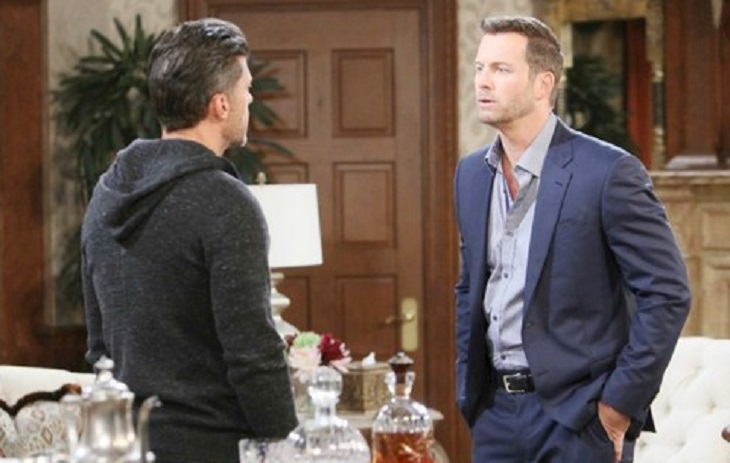 Days of Our Lives (DOOL) spoilers tease that Eric Brady (Greg Vaughan) will soon be feeling rattled. As DOOL viewers know, he’s just embarked on a relationship with Sarah Horton (Linsey Godfrey), after Sarah ended her marriage to Rex Brady (Kyle Lowder). Eric and Sarah have gone through a lot to be together, and they’re finally happy and settled as a couple.

But soon, Eric’s going to learn some news that will stir up some old (and bad) feelings. As DOOL viewers know, Nicole Walker (Arianne Zucker) has rekindled her romance with Brady Black (Eric Martsolf). Nicole and Brady recently made love, and soon they’ll be taking their relationship public, and that’s going to cause all kinds of problems.

Of course, DOOL viewers know that Nicole isn’t really Nicole – she’s Kristen DiMera (Stacy Haiduk) in a “Nicole” mask. But as far as everyone is concerned, she’s Nicole, and Brady fully believes that he’s back together with Nicole. And he’s going to have a formidable task in telling Eric about being with Nicole.

Since Eric and Nicole used to be the love of each other’s lives, it’s going to be a difficult conversation for Brady to have with his brother. And apparently it’s not going to go well. According to DOOL spoilers, Brady will bite the bullet and confess to Eric that he and Nicole are back together.

Days of Our Lives Spoilers: Will Marlena Get Tony and Anna Back Together? https://t.co/B83G33zQLY pic.twitter.com/NPfBYbx66Z

Well, suffice it to say that Eric won’t be impressed by the news. Eric was devastated when Nicole rejected him and blamed him for Holly Jonas’ (Harlow and Scarlett Mallory) death. Of course, that wasn’t really Nicole, it was Kristen. But as far as Eric knows, Nicole has turned on him, and it will be very difficult for him to accept that she’s moving on with his brother.

Look for some tense moments between Eric and Brady, as Eric is devastated by the terrible news. Also look for Sarah to reel from the news, as she watches Eric crumble, knowing that his ex-true love is causing him so much pain. According to DOOL spoilers, it will cause some insecurity on Sarah’s part, as she doubts her love with Eric in light of Eric’s reaction to Brady’s news.

Of course, at some point, both Brady and Eric are going to learn that Nicole is really Kristen, and that’s going to lead to an even worse realization on Eric’s part…that Nicole isn’t really alive, as everyone thought. Eric will be horrified to realize that Nicole is probably really dead, just as he thought before Kristen came back as Nicole.

It will be a confusing time for everyone, and it will be interesting to see exactly what effect all of this will have on Eric and Sarah’s relationship. Do you think they’ll be able to survive all of this kerfuffle about Nicole?