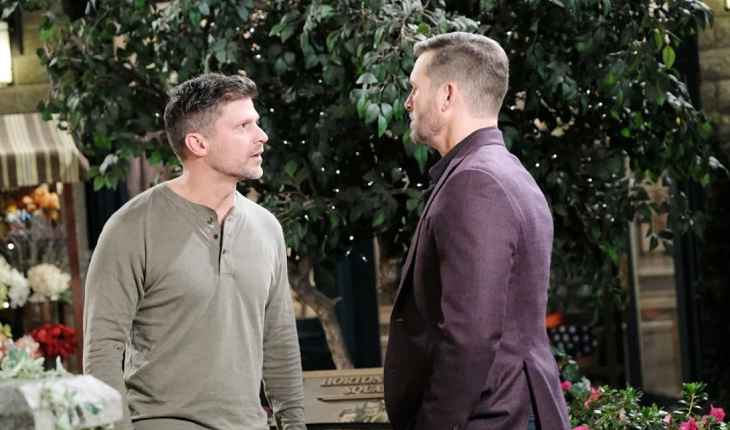 Eric will likely be angry about Eric and “Nicole’s” reconnection, but he may also insist he’s letting go. Now that Eric’s with Sarah Horton (Linsey Godfrey), he just wants to concentrate on the future.

However, Eric’s future could look quite different after some upcoming revelations. The Nicole who rejected him isn’t the real Nicole at all! Gabi DiMera (Camila Banus) just found that out for herself when she peeled off “Nicole’s” mask. She was stunned to see Kristen DiMera (Stacy Haiduk) underneath, but things are only going to get worse in Monday’s DOOL episode.

“Days” spoilers say Kristen will knock Gabi out, which will bring a shocking scene for Stefan DiMera (Brandon Barash) to walk in on. He’ll bend down to help Gabi and try to fight Kristen off, but he’ll ultimately get knocked out as well. Both Stefan and Gabi will find themselves held captive in the DiMera secret room, so they’ll have plenty of time to mull over Kristen’s plan…and their relationship.

Over with Maggie Kiriakis (Suzanne Rogers), “Days of Our Lives” spoilers say she’ll celebrate her sobriety. Maggie went through a rough patch, but she’s on the right track now.

She’ll fill someone in on how great she’s doing on Monday, so she should get some positive words in return. It’s great that Maggie finally has a grip on her drinking problem and can use helpful coping strategies.

Other “Days of Our Lives” spoilers say Kate Roberts (Lauren Koslow) will accept a new job. Mr. Shin (Michael Hagiwara) will give Kate the CEO spot since she was a DiMera before Andre DiMera’s (Thaao Penghlis) demise.

That’s close enough since Kate has solid experience and truly knows what she’s doing. Mr. Shin will trust that Kate can lead DiMera down a better path, but big trouble’s coming up, too.

Stefan and Gabi will have some complaints eventually, but they’ll have to get out of their hostage crisis first! We’ll give you updates as other “Days” new and rumors emerge. Stick with DOOL and don’t forget to check Hollywood Hiccups often for the latest “Days of Our Lives” spoilers, rumors, updates and news.