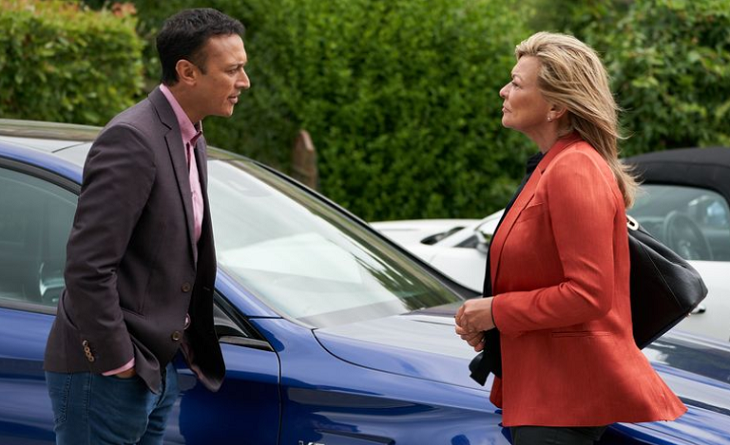 Spoilers released by the show teased that she’s planning to develop an outdoor pursuit center. Everyone knows that coincidences rarely happen on this show.

That’s why when Al said he used to run an outdoor pursuits business when he was in Dubai, fans were quick to infer that he might be in town to work with Kim. Will Graham Clark (Kevin Pallister) be okay with these two working together? Will they be part of a major storyline?

Emmerdale Spoilers – There Were Early Hints About Outdoor Pursuit Center

Wildman debuted his character on the show’s August 14 episode. He made his first appearance as he waltzed into a meeting, in which Ellis was expected to be with a potential investor.

Emmerdale Spoilers: Robert Downplays Attacking Lee – Will He Get A Life Sentence?

It was revealed that Al came from Dubai where he ran an outdoor pursuit business and it looked like he was living the life back there. It was revealed later on that he had no contact with his son, Ellis, for more than a year.

Back in July, showrunner Kate Brooks dropped a hint about a big storyline involving a new outdoor pursuit center. She said, “Getting in bed with Kim Tate is like getting in bed with the Devil herself so it won’t be plain sailing for [Jai].

“They are planning a new outdoor pursuit centre at the heart of the village – there will be kayaks, segways, a nice little eatery and will look fantastic and rejuvenate the village,” she added. “It will bring new characters into the village and they can all have fun in the treetops and zipwires.”

King also teased of a Kim and Graham storyline, which she said involves family. She also hinted that her alter ego “goes into partnership with a new guy who she worked with in Dubai when she went away on a business holiday. They’re very, very similar, so whether they will click together or explode, who knows?”

This may cause some conflict with Graham. King added, “Graham doesn’t like it too much, as he feels it’s encroaching on his turf!”