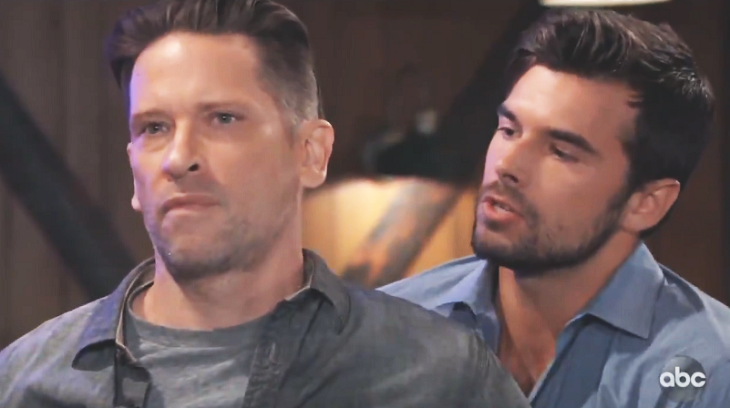 Carly loves the idea of renewing their vows. Sam McCall (Kelly Monaco) arrives with good and bad news. Carly says they know about Cameron. Sam tells them Franco thinks he is Drew. Sonny asks if Sam has spoken to Drew. Sam tells Carly that Drew keeps telling Liz that Franco will come back to her. Carly doesn’t think Drew is being unrealistic. She says they cannot force Franco to face the truth.

Carly questions if Franco is supposed to spend the rest of his life thinking he is Drew. She and Sonny tell Sam about Mike Corbin’s (Max Gail) wedding. Sonny tells Sam he and Carly have decided to renew their vows. Sam says this is so exciting. Sam suggest Avery be a flower girl. Carly doesn’t want a church wedding. They just want those they love close to them. Sam prepares to leave, and they tell her she is at the top of the guest list. Sonny and Carly think a terrace would be great.

General Hospital’s Josslyn Jacks (Eden McCoy) and Dev (Ashton Arbab) go to Charlie’s for food. Dev tells Joss about some authors knows about, and she is surprised he has read them. Joss wants to know what street kid knows this much about feminist history. Dev says he learned from his mom. Josswants to know about his family. Dev refuses to talk.

General Hospital’s Monica Quartermaine (Leslie Charleston) approaches Drew Cain (Billy Miller) at the hospital. Monica asks about Kim Nero (Tamara Braun). Drew wants to talk privately. He fills Monica in on the memory transfer. Drew tells Monica he has been robbed of his life twice. Monica questions why Drew didn’t use the flash drive. Drew says they would erase his current memories.

Monica asks why he didn’t destroy it. Drew was hoping someone could find a way to combine them. Monica thinks there could be a silver lining to this. Monica wants Drew to talk to Franco to fill in the blanks of his life. Drew can’t ask Franco to share his memories and he probably wouldn’t anyway.

General Hospital’s Hamilton Finn (Michael Easton) wants to talk to Hayden Barnes (Rebecca Budig) about Liz Webber (Rebecca Herbst). Finn explains that Franco doesn’t remember any of his life with Liz. Finn could never hate Hayden, but life is too short to keep grudges. Hayden asks Finn how to help Liz. Finn thinks Hayden already knows what to do. Finn calls Liz to check on her, Hayden arrives and announces she is moving in with Liz.

Liz says Franco loves them and he will find his way back to them. Hayden wants to make sure that it’s safe to be around Liz’s kids. Hayden thinks Finn can figure out a way to help Franco. Liz cries on Cameron’s shoulder before sending him upstairs to bed. Liz relives her wedding vows.

General Hospital’s Jason Morgan (Steve Burton) approaches Franco at the Floating Rib. Franco says Jason Quartermaine, Jason corrects him. Franco says, “my twin.” Drew has known about Jason since he saw him in a newspaper. Franco says Alan Quartermaine (Stuart Damon) dumped him and raised Jason. He explains to Franco that Alan and Monica didn’t know anything about Drew. Jason says none of this has anything to do with him.

Jason tries to explain to Franco that he is married to Liz. Franco doesn’t want to see Liz again. He wants to borrow money for a bus ticket, Jason offers to get him a room instead. Franco doesn’t want Jason’s money and tells him to stay away from him. Jason stops Franco and tells him he is connected to a lot of people there and calls him Franco. Franco says that is the last time he lets anyone call him that today. Jason refuses to fight Franco and Franco ends up punching Chase. Chase arrests Franco for assaulting a cop.

General Hospital’s Willow Tait (Katelyn MacMullen) and Harrison Chase (Josh Swickard) are eating at the Floating Rib. Willow notices Chase watching Jason and Franco. Chase tells Willow that his dad is a teacher and inspired him to be a cop. Chase talks about how their father inspired both him and Finn to make a difference. Chase needs to know if Willow has decided she can’t handle his job. Willow says no and continues to support Chase.