Days Of Our Lives Spoilers: Desperate Kristen Points Gun At Marlena – Will The Good Doc Get Shot? 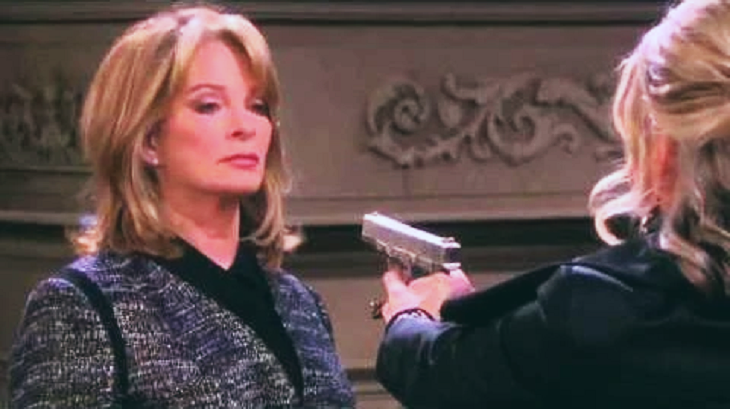 Days of Our Lives spoilers reveal Kristen DiMera’s (Stacy Haiduk) desperation is growing. She fantasized about shooting Marlena Evans (Deidre Hall) this week. However, information for next week confirms that she will actually pull a gun on the fan-favorite character nicknamed “Doc.”

Last week, Chloe Lane (Nadia Bjorlin) asked Marlena to talk to Nicole Walker (Arianne Zucker). However, the women don’t realize that “Nicole” is really Kristen DiMera wearing a mask. Chloe’s intentions were pure, but Marlena can only talk to Nicole on a personal level, not a professional one.

Days of Our Lives spoilers reveal Marlena agrees to Chloe’s plea. As fans saw earlier this week, Doc knocked on Nicole’s hotel room door. However, there was no answer.

Unknown to Marlena, Kristen didn’t have on the Nicole mask and was prepared to shoot her. She even fantasized about firing the gun and killing the fan-favorite character. However, that didn’t happen. At least, not yet.

DOOL spoilers for the week of August 19 tease Marlena’s life really could be in danger. Even though Kristen already fantasized about shooting Marlena, spoilers suggest the villain really could point a gun at the good Doc.

There is no news on Deidre Hall leaving the NBC soap opera. So, it seems that whatever happens, Doc will survive or this could just be another fantasy of Kristen’s.

It is also reported that next Friday, Kristen’s true identity will finally be exposed. Fans are debating on how this happens. Even though some think she will reveal herself, that is not what the wording of the spoiler indicates.

The exact phrase used is “Kristen is exposed.” This suggests that someone unmasks Kristen, revealing who she really is to all of Salem. Perhaps it is Tony (Thaao Penghlis) or Anna (Leann Hunley). They would both have the guts and be angry enough to stop her reign of terror.