Days Of Our Lives Spoilers: John And Marlena’s Celebration Is Interrupted By A Surprise Guest 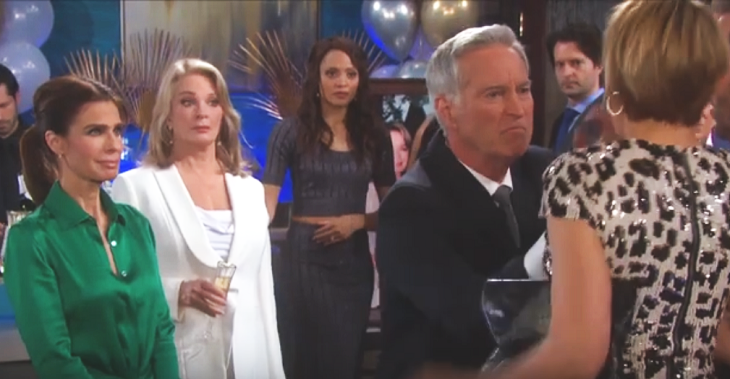 Days of Our Lives spoilers reveal John Black (Drake Hogestyn) and Marlena Evans (Deidre Hall) will have a special celebration. However, it will be interrupted by a surprise guest. Find out who it is and what happens next on the NBC soap opera.

As seen earlier this week on the NBC soap opera, John was planning a big surprise for his wife. He shared his plans with Hope Brady (Kristian Alfonso), who was sworn to secrecy.

Then, Marlena shared a piece of information with Hope: that she was planning the same thing. Turns out not only are Jarlena both planning surprises, but they have the same exact idea!

Days Of Our Lives Spoilers – No Party Complete Without Shocking Surprises

Days of Our Lives spoilers tease that John and Marlena will have a big surprise party for each other. This is exciting news for viewers. Jarlena is a fan-favorite couple who has dealt with trials and tribulations throughout the decades.

They are finally together, happy and still madly in love. However, no party is complete in Salem without some shocking surprises.

A surprise guest is teased and it turns out that the person will “shock” John. According to the latest information, that individual is Susan Banks. However, fans are curious why Susan’s appearance would shock John so much. It is true that others have seen Susan recently, including Marlena. However, John hasn’t seen Susan in at least a year. Is this truly what shocks John or is there something we don’t know?

Some viewers speculate that Kristen DiMera (Stacy Haiduk) might come disguised as Susan Banks. That is a possibility, but photos show Susan clapping in the background. Kristen has her own agenda and if she attended, she certainly wouldn’t be applauding the couple unless she were being watched very closely. However, it would explain why Kristen decides to get rid of Susan, if she were to somehow ruin her plans.

Days of Our Lives spoilers reveal that the same week of the party, there will be another big surprise. Kristen DiMera will finally be exposed! Will this happen at the party, before or afterward? According to sources, it will take place next Friday.

In fact, that day seems to be all about Kristen, so it might happen after John and Marlena’s party. As for how the rest of Salem will react, fans will have to keep watching to find out. Stay tuned to Days of Our Lives and check Days of Our Lives spoilers frequently for all the latest news, updates and developments!