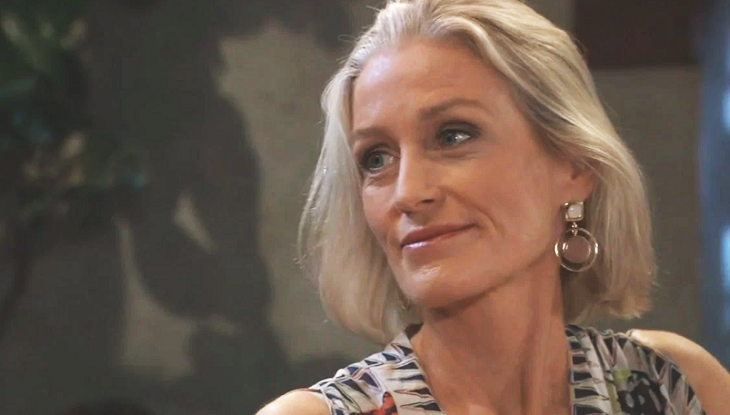 General Hospital spoilers tease that perhaps a different presumed dead Cassadine might be Cassandra Pierce’s (Jessica Tuck) handler instead of Nikolas Cassadine (Tyler Christopher). Could it be Stavros (Robert-Kelker Kelly)?

General Hospital viewers will recall in a recent episode when Laura Collins (Genie Francis) was trying to trick psychic Chelsea Lam (Jen Ray) into exposing herself as a fraud, that she gave Laura a warning that her son was in grave danger!

She naturally assumed Lucky Spencer (Jonathan Jackson) and immediately excused herself. She then called Lucky and he was fine. But could the son Chelsea warned her about be Nikolas? That would imply that he is not Cassandra’s handler, but possibly her prisoner. He could even be ill with the same virus as Sasha Gilmore (Sofia Mattsson)!

There are several possibilities, allowing for recasts, of presumed dead Cassadines that the mysterious hand bearing a Cassadine ring on Cassandra’s knee that General Hospital viewers recall could be. It was assumed that the Cassadine was kidnapping her, but he could have been assigned as her handler.

Cassandra had been kidnapped from a WSB facility, presumably in Canada, and transported to a Canadian clinic where Dr. Hamilton Finn (Michael Easton) was lured by the kidnapping of Anna Devane (Finola Hughes) last summer, in order to bring Cassandra out of a coma.

He brought her out of it, but then on the way back to the WSB she was intercepted. The assumption is that this could be the work of the DVX, but it is also possible that a surviving Cassadine may be behind the whole thing and now is moving Cassandra around. But which Cassadine would be cruel enough to make Nikolas ill with the same virus Sasha has?

General Hospital Spoilers – Could Stavros Cassadine Be Behind It?

The cruelest most sadistic Cassadine would have to be Stavros Cassadine (Robert Kelker-Kelly), Nikolas’ father! He was the most insane Cassadine as well, and Helena Cassadine’s (Constance Towers) favorite. Supposedly he was shot dead by Dante Falconeri (Dominic Zamprogna) in the process of saving Lulu Falconeri (Emme Rylan) in 2014. But it is possible that the protocol that Robin Scorpio-Drake (Kimberly McCullough) was forced to make to resurrect Helena may have been saved and used on Stavros at a later time.

One presumed dead Cassadine that makes a lot of sense in this case might be Victor Cassadine (Thaao Penghlis). Thaao is busy playing Tony DiMera on Days of Our Lives these days, so Victor may have to be recast. But on the other hand, DOOL tapes six months ahead and he just showed up over there so he may be done filming and be available to reprise Victor for a short arc.

Victor was the head of the WSB several years ago and also the Crichton-Clark Clinic where Nina Reeves (then Michelle Stafford) was in a coma for several years, and Liesl Obrecht (Kathleen Gati) worked there as well. He and Liesl had been romantically involved at one time, although during those years she was always chasing after Cesar Faison (Anders Hove). It is doubtful, however that Victor would want Nikolas to be injected with a deadly virus, but then Nikolas could be in grave danger for another reason.