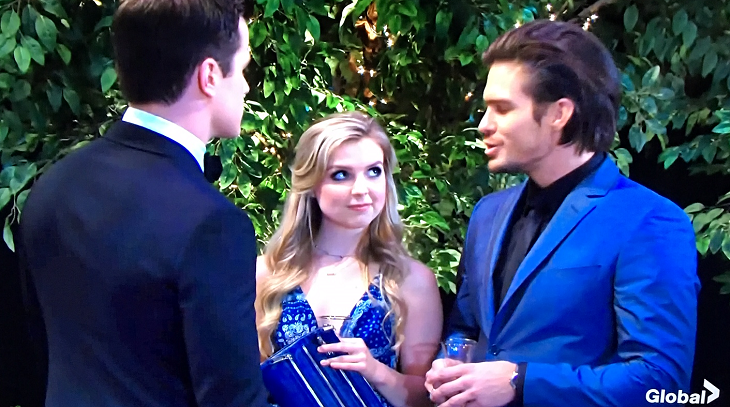 Michael Baldwin (Christian LeBlanc) will be on the hot seat, this week on the Young And The Restless (Y&R) as his wife, friends and business associates begin to question his loyalty. Also coming up this week, Lola Rosales (Sasha Calle) will be surprised when she encounters an uninvited wedding guest, Sharon Newman (Sharon Case) will be astonished, and someone makes a shocking return to Genoa City.

Lola Rosales (Sasha Calle) will be caught off guard, when she realizes her father Adrian Rosales (Jay Montalvo) attended her wedding to Kyle Abbott (Michael Mealor). After she spots her brother Rey Rosales (Jordi Vilasuso) confronting him, she will ask to speak with him alone.

Also, Arturo Rosales (Jason Canela) is back on the Y&R canvas for his sister’s nuptials. Arturo will tell Abby how sorry he is for everything that went down between them. Abby’s new squeeze Nate Hastings (Sean Dominic) will approach the pair and ask Abby if there’s a problem.

Y&R spoilers tease another uninvited guest will show up at the Kola wedding. Although Theo Vanderway (Tyler Johnson) didn’t attend Kyle and Lola’s ceremony, it looks like he’s going to crash the reception and with Zoe Hardisty (Anna Grace Barlow) on his arm no less! Kyle will confront him and ask: “What the hell are you doing here?”

Lauren Fenmore (Tracy E. Bregman) is none too happy with Michael either. Rumor has it, she will press her husband for answers. But will he finally tell her he’s been working with Adam to protect his brother?

Speaking of Adam, he will surprise Sharon when he proposes to her. “Marry me,” he says. Stunned, Sharon will reply with: “What?” Then later in the week, Nick will comfort Sharon. Will she be confused about whether she should marry Adam, or has she already said yes or no?

Young And The Restless Spoilers – Victor Newman Learns A Secret

Also, other spoilers tease that Victor Newman (Eric Braeden) will become privy to a secret and he will also question Michael’s loyalty. Victor has trusted Michael in the past, so could the secret he uncovers have to do with Michael’s partnership with Adam?

Finally, spoilers promise a shocking return by the end of the week, which is very likely Chloe Mitchell’s (Elizabeth Hendrickson) Genoa City homecoming. But will she have Kevin Fisher (Greg Rikaart) in tow? And will others, like her former best friend Chelsea, finally find out Chloe is alive? Stay tuned to Y&R to find out!

The Young And the Restless (Y&R) Spoilers: Jesse’s Threat Makes Him A…