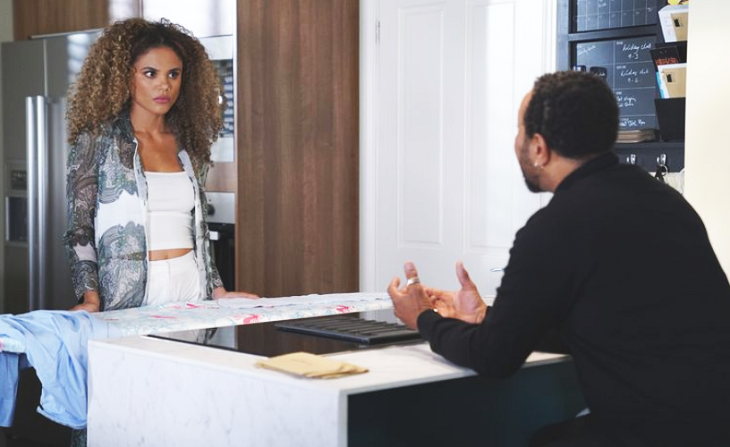 Next week on “EastEnders,” Chantelle Atkins (Jessica Plummer) will try to cheer up her half-sister Bailey (Kara-Leah Fernandes), even if it means angering her husband Gray Atkins (Toby-Alexander Smith).

As Gray leaves home for his training to become a Solicitor Advocate, Chantelle takes the opportunity to support Bailey on the day of Dinah’s (Anjela Lauren Smith) inquest. Mitch Baker (Roger Griffiths) turns to her for help because all their efforts to cheer Bailey up weren’t working.

After Mitch tells her everything, Chantelle decides to help pay for a telescope for her sister, hoping that this will finally make her smile. Obviously, Chantelle has good intentions but how will her husband react?

Viewers may recall that Gray attacked his wife behind closed doors, which confirms the show’s domestic abuse plot for Chantelle. Gray has started to show his true colors after Walford’s charity 10k run, where he was coerced to join along with Chantelle and Mitch.

Later, Mitch ended up as the surprise winner and the Taylors and the Bakers celebrated at The Vic. During the celebrations, Mitch confessed that he cheated, which infuriated Gray.

He then forced Chantelle to leave the party and as soon as they arrived home, Gray attacked his wife. It was revealed that it wasn’t the first time Gary had laid his hands on Chantelle. For now, Chantelle has kept her ordeal at the hands of her husband a secret.

EastEnders Spoilers – Show Is Highlighting What Lurks In The Shadows

“EastEnders” worked with Refuge and Women’s Aid for this storyline. “Domestic abuse is the biggest issue affecting women and children in this country today,” the organization’s chief executive Sandra Horley said. “It is a crime which takes the lives of two women every week in England and Wales alone, with one in four women experiencing the issue in their lifetime.”

Just like what’s been shown in the show, Horley added that “Domestic abuse mostly happens behind closed doors – hidden, lurking in the shadows of our society.” She also stressed that learning more about it can help women like Chantelle to spot red flags and seek the help of a group like Refuge.

“The more we all understand domestic abuse, be it the physical, emotional, sexual, financial control exerted by one partner over another – and are able to spot the signs – more women, like Chantelle, will be able to seek help from specialist organisations like Refuge,” she explained.