General Hospital Spoilers: Finn Is Shocked By Test Results As He Races Against Time To Save Sasha 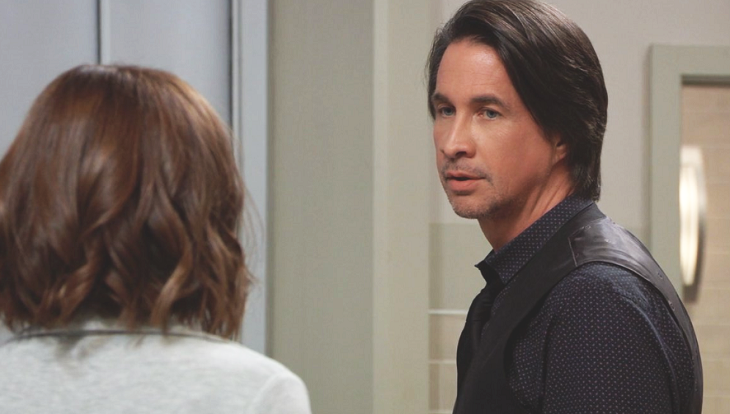 General Hospital spoilers tease that Dr. Hamilton Finn (Michael Easton) will be stunned by a series of test results that he receives.

Finn is an infectious disease specialist, it stands to reason that these test results will be coming from the search for a cure for the rare strain of influenza that Sasha Gilmore (Sofia Mattsson) is suffering from.

Everyone who has had contact with her has been tested for the virus, and no one has tested positive for it and no one else has manifested any symptoms. So, since influenza is spread through the air as an airborne virus, Finn has been puzzled. Finn will then think outside the box of the flu symptoms and order other tests.

Although flu can be contracted through touching something a person who has the flu has touched, and the virus can be active for a certain period of time by touch. Usually it is not contracted in that manner unless the person does not wash their hands and skin-to-skin contact is made with the inside of the nose or the mouth. For instance, if the person scratches their nostril or bites their nails, or eats finger foods without washing their hands.

However, regardless of how Sasha contracted the contagion, no one else has who was in close contact with her before she became ill. Of course, it is always possible that Sasha could have an undiagnosed autoimmune disease that would make her more vulnerable to contracting illnesses like the flu, such as asthma or diabetes, so he may first run tests to rule out those conditions.

Even though the virus has been previously discovered to be a rare strain of influenza, there are other respiratory illnesses that can masquerade as influenza that may be treatable by medicines other than what a doctor would treat influenza with.

General Hospital Spoilers – Will Roxie Come To The Rescue Again?

Roxie, Finn’s therapy animal, who is a bearded dragon, hasn’t been seen or heard from for a while but she’s probably still alive and well. If Cassandra Pierce (Jessica Tuck) really wanted to bug Finn, as she might, she may have had this influenza strain mixed up from a reptilian variety of influenza. And even though Roxie may or may not be the one to come to the rescue with a serum like Finn developed for Blackwood’s Syndrome a few years back, she may have come to mind when ordering medical tests.

Sasha's coming to terms with her illness, West Coast. Can she convince Nina to face reality with her?
Tune into a tense, new #GH – STARTING NOW on ABC! @SofiaMattsson1 pic.twitter.com/BD00gRxlm9

Finn may have had some tests done for influenza strains in both mammals and reptiles and he may be stunned to find that this influenza is a reptilian variety, since humans are mammals and nothing they have tried has worked on Sasha yet!