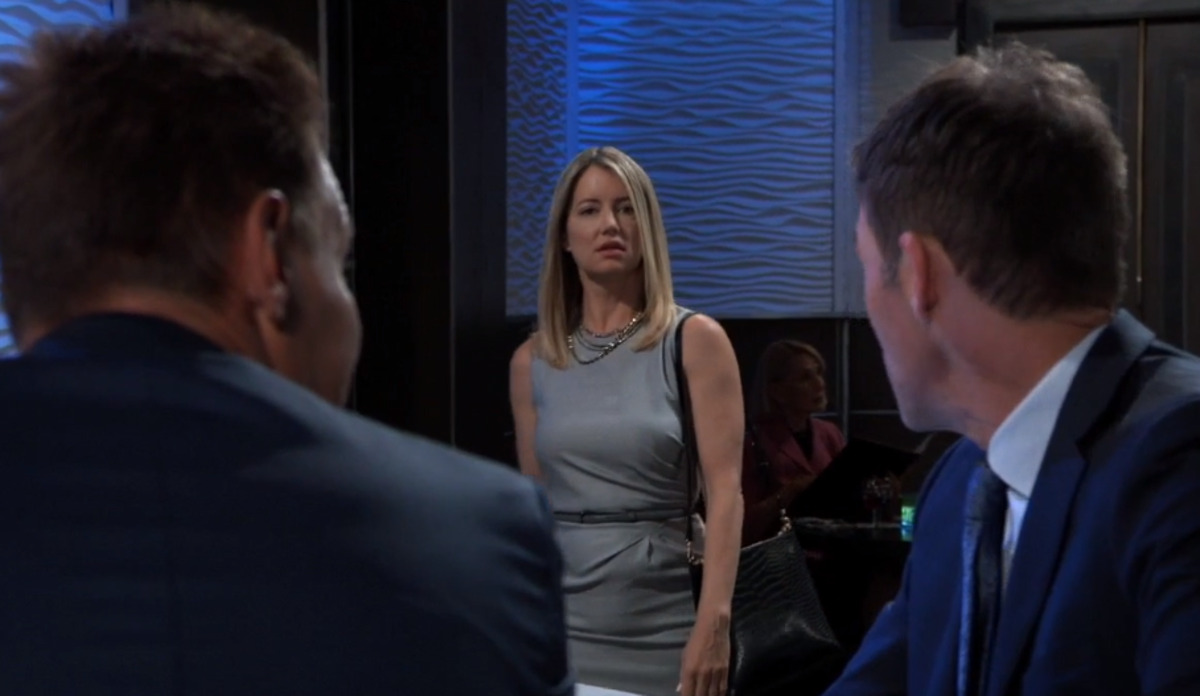 General Hospital spoilers tease that Nina Reeves (Cynthia Watros) will get a startling text soon on General Hospital; could it be the selfie that Cassandra Pierce (Jessica Tuck) took with Michael Corinthos (Chad Duell) and Sasha Gilmore (Sofia Mattsson)?

As General Hospital viewers know, Nina has been very worried about Sasha and about the fact that even though the virus has been classified as a rare influenza strain, none of the treatments tried by her medical team have worked on her yet and she appears to be getting worse rather than better! Nina has been so worried she advised her boss, Jasper Jacks (Ingo Rademacher) in a recent General Hospital episode that she would be working remotely for a while instead of in her office at Crimson Magazine, so she could be closer to her “daughter” Sasha!

In the meantime, infectious disease specialist Dr. Hamilton Finn (Michael Easton) continues to look for answers and run tests and wait for results of tests run initially to try and find a protocol that works on the illness that Sasha has. Rare diseases require rare cures and it may take a while to find one, and Nina worries that one may not be found in time for Sasha.

She worries that the daughter that she thought was miscarried for over twenty years may die, and Nina won’t be able to handle that kind of grief! Fortunately, other General Hospital spoilers say that Finn will receive some stunning test results the same day that Nina receives the startling text, so a cure may be closer than Nina thinks!

If this text indeed is that selfie Cassandra took, Nina will recognize Cassandra immediately and take action, contacting Finn and Valentin Cassadine (James Patrick Stuart) if Valentin isn’t already there by her side. This will provide a quick answer to how Sasha contracted the mysterious virus, although they won’t be able to exactly prove it.

Sasha’s memory may be jogged if Finn questions her about things she ate at that breakfast with “Sandy Lance” and she will remember that her grapefruit tasted bitter! Unfortunately, that grapefruit is long gone and out of Sasha’s digestive system, so that won’t be available anymore for testing!

Cassandra is a fugitive from the WSB, so Finn will likely contact either Anna Devane (Finola Hughes) directly or contact District Attorney Robert Scorpio (Tristan Rogers) with the new developments in the case. Finn may have more of an idea what he’s dealing with once all the tests are back and knowing it may be a pathogen or possibly a strain of flu not thought to infect humans previously, possibly something reptilian since humans are mammals, this may put Sasha’s illness in the realm of germ warfare pathogens.

One of the strains of influenza that is more dangerous to humans came from an avian variety of flu commonly known now as “bird flu” so this would not be too far-fetched to think this variety could be reptilian!