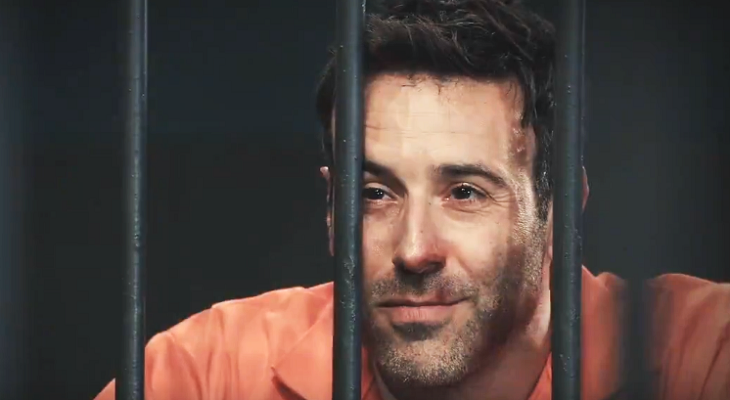 Drew tries to explain that Scott is not going to find Franco Baldwin (Roger Howarth) but pre 2012 Drew Cain. Drew explains that Franco won’t recognize him, but Franco still needs a lawyer. Drew tells Jordan that Scott isn’t prepared for what he will find when he sees Franco. Scott speaks to Franco, who doesn’t recognize him. Franco tells Scott he isn’t anyone’s son. Scott offers to be his lawyer, Franco agrees.

General Hospital’s Shiloh Archer (Coby Ryan McLaughlin) wants to make a phone call, Jordan Ashford gives Shiloh the phone. Shiloh wants to give them some information on Alexis Davis (Nancy Lee Grahn). Jordan believes that Shiloh will still go down for kidnapping. Jordan tells Jason that Shiloh is being shipped to Pentonville today.

Shiloh is brought back to lock-up and comes face to face with Franco. Shiloh claims not to remember the last time he saw Drew. Drew remembers Shiloh knocking him out and handing him over to Helena Cassadine (Constance Towers). Shiloh doesn’t think he will be in jail very long.

Franco refuses to tell Shiloh where the money is. Shiloh says he still finds a way to get paid. Shiloh wonders if someone might have found his money. Franco tells Shiloh he is going to prison for the rest of his life. Shiloh offers to tell Franco who helped take Drew if he gives up the information about the money’s location. Franco refuses the deal and promises to give the money away for humanitarian aid.

General Hospital’s Alexis and Sam McCall (Kelly Monaco) show up at Charlie’s Pub to see Julian Jerome (William DeVry). Julian tells Sam that he is moving to Manhattan. Sam questions how Alexis is handling Julian’s decision. Alexis is good with it if Julian can move past this. Julian wants to make things right with Sam and the kids.

Julian wants Sam to see the whole picture and allow him to see his grandchildren before he leaves. Sam agrees to set up a date with Lucas Jones (Ryan Carnes) and Brad Cooper (Parry Shen). Jason tells Sam about his visit with Franco. Sam thinks it might be good that Franco can’t remember. Olivia arrives at Charlie’s, Julian is surprised she is buying Charlie’s. Julian is blown away because Olivia wants the pub for Leo Falconeri’s future.

Sonny thinks he should have said something to fix his son. Robert tells Sonny that he didn’t break Dante and he can’t fix him. Lulu tells Sonny and Olivia that she is not going to contest the divorce. Lulu has to do what she thinks is best. Lulu needs help with Rocco Falconeri (O’Neill Monohan). Sonny and Olivia will always be Lulu’s family, and they hug. Sonny tells Lulu she will always be a part of his family. Lulu thanks Sonny for helping guide Rocco through this and Sonny promises to help any way he can. Lulu removes her rings after walking out Sonny’s doors.

General Hospital’s Jason Morgan (Steve Burton) goes to the PCPD to speak with Franco who asks Jason how this brain procedure could have happened. Jason explains that the memory mapping didn’t work on him so Drew was taken for the procedure. Franco tells Jason they all are doing a good job keeping up their story. Jason tells Franco that the police have the flash drive with Drew’s memory but not his. Franco doesn’t want Jason’s help. Jason leaves him and goes to the pub.

General Hospital’s Hayden Barnes (Rebecca Budig) has made breakfast for Liz Baldwin (Rebecca Herbst) who don’t feel like eating. Liz questions if Hayden knows what she is getting into moving in with her. Liz reminds Hayden of the family she wants to have if she could. Hayden wants to be there for Liz and her boys. Drew and Curtis Ashford (Donnell Turner) catches up with Hayden.

Drew and Curtis talk about reversing the procedure on Franco. Drew says that nothing could happen with the flash drive, Franco could lose new memories, or Franco could be a vegetable. Liz plans to talk Franco into have the procedure reversed, and Drew can find someone to do it.