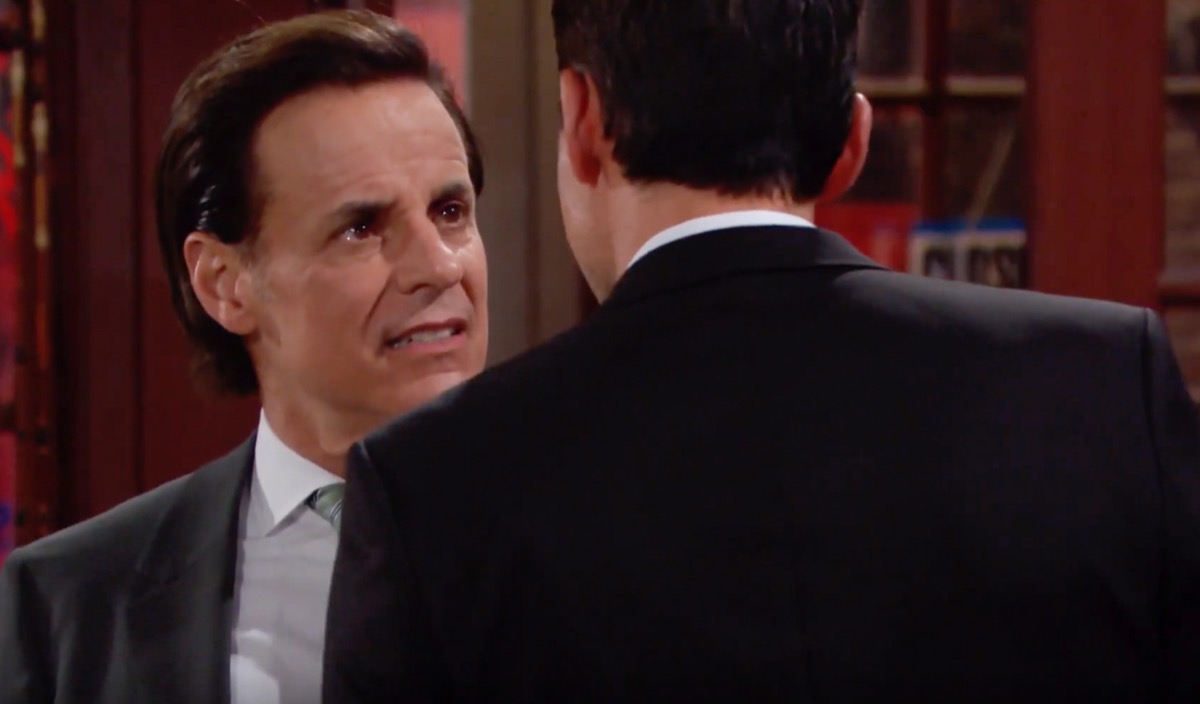 “The Young and the Restless” spoilers for Tuesday, August 20, tease that Rey Rosales (Jordi Vilasuso) will shut down his father’s flirting. At Crimson Lights, Rey finds Adrian Rosales (Jay Montalvo) trying to charm Sharon Newman (Sharon Case). He pulls Adrian away from the conversation and suggests his dad’s trying to cash in since Lola Abbott (Sasha Calle) married into a wealthy family.

Adrian agues with Rey until Celeste Rosales (Eva LaRue) steps in. Despite Adrian’s attempt to score another chance, Celeste thinks it’s clear he’s not a family man. Afterward, Celeste shows some sympathy for Adrian during her chat with Rey. She also comforts Rey over his Sharon split and insists happiness is coming for him someday.

Young and the Restless Spoilers: Will Sharon Accept Adam’s Proposal Or Try To Reunite With Rey?

Lauren continues grilling Michael a little later. She’s convinced this all started with Kevin Fisher (Greg Rikaart) and suspects Michael’s going to take Adam down as DA. Michael still won’t cough up details, but he assures Lauren everything will become clear soon.

Young and The Restless Spoilers – Phyllis Is Curious

Over with Phyllis Summers (Michelle Stafford), she talks to Summer Newman (Hunter King) about Zoe Hardisty (Anna Grace Barlow). Phyllis wonders how much Lola knows about Zoe before turning her attention to Adam, who speaks with Michael briefly. When its Phyllis’ turn, she’ll suggest she’s grateful that Adam sold the Grand Phoenix to Abby Newman (Melissa Ordway). Phyllis intends to partner up.

Adam takes a jab about Phyllis being Abby’s headache now. The restraining order comes up, which Phyllis praises as a good move on Victor Newman’s (Eric Braeden) part. She understands why Adam’s so hung up on revenge, but she warns that it gets you nowhere. Phyllis is choosing to devote her life to what she loves and finds Adam’s path sad.

Meanwhile, Summer encounters Zoe and learns she’s one of her social media followers. Zoe explains that she doesn’t hold any grudges over what happened in New York. She notes that she’s especially fond of Theo Vanderway (Tyler Johnson), who appears and suggests a group lunch. Zoe notes that Summer’s busy with her mom, and Summer indeed returns to Phyllis. However, she’s called away for a Jabot meeting soon after.

Back with Adam, he calls Sharon over to the park and drops a bomb on her. Sharon’s shocked when Adam asks her to marry him. On their island getaway, Lola and Kyle Abbott (Michael Mealor) start their honeymoon off right. They wake up, make love and reflect on their wedding through all the pictures.

Young and the Restless POLL: Should Victor and Jack Become Friends? Vote Now!

Lola mentions Theo’s plus one and ponders if making Summer jealous was his goal. They also discuss Adrian, who lives a lonely life that he chose for himself. Afterward, the newlyweds dine together before considering their next move. Lola and Kyle decide to skip the outdoor activities in favor of more fun in the bedroom.

“The Young and the Restless” spoilers say Kyle’s secret will lead to big problems down the road. We’ll give you updates as other Y&R news and rumors emerge. Stay tuned to see what’s else is ahead in Genoa City.