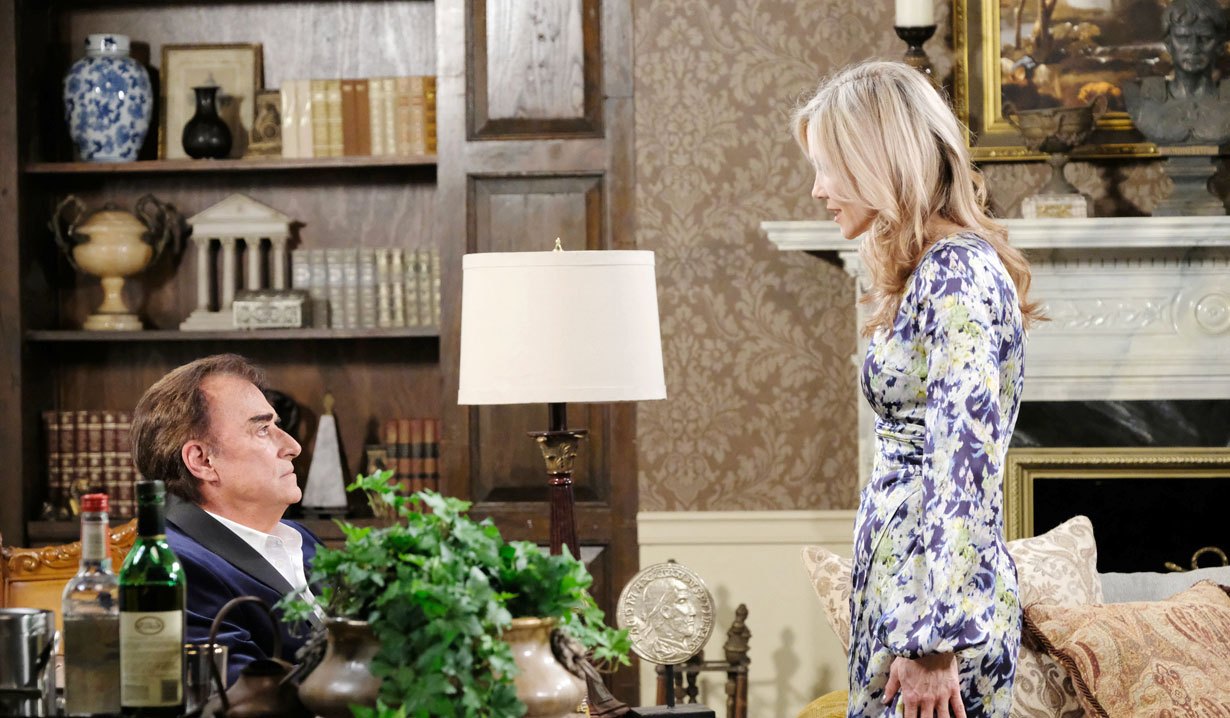 Days Of Our Lives Spoilers – Kristen DiMera Is Unmasked!

The first takeaway is something that Days of Our Lives viewers have been waiting for a long time; fake Nicole Walker DiMera (Adrienne Zucker) is finally unmasked as Kristen DiMera (Stacy Haiduk) and it happens at John Black (Drake Hogestyn) and Dr. Marlena Evans’ (Deidre Hall) party at Doug’s Place! Days of Our Lives viewers, however, will recall that the Friday, August 16th cliffhanger showed “Nicole” and Gabi Hernandez DiMera (Camila Banus) get into a catfight, and Gabi pulled the mask and wig off to expose a snarling Kristen with all claws out and ready to strike!

Stefan DiMera (Brandon Barash) arrives to break it up and saves Gabi’s life, but then Kristen knocks both of them out and drags them into the secret room at the DiMera mansion, and entraps them! She then puts her mask and wig back on so she can meet up with Brady Black (Eric Martsolf). She then is shocked when Brady mentions to her, after having been told by Will Horton (Chandler Massey) that Kristen might be alive! She knows that she’s going to have to be much more careful to keep her cover. Meanwhile, while entrapped in the secret room, Gabi wants to know why Stefan saved her life after she betrayed him, and the two wind up admitting their true feelings for each other to each other.

She goes back to she and Tony DiMera’s room at the Salem Inn to get ready to meet up with Brady. Brady arrives, and Tony DiMera (Thaao Penghlis) interrupts them by asking for a divorce, even after she threatened harm and made death threats against Anna DiMera (Leann Hunley).Brady then leaves to get ready for the party and meet up with “Nicole” there. Once she’s arrived at the party, she comes upon Susan Banks (Stacy Haiduk) and her big mouth, and realizes that Susan is a threat that must be dealt with; she grabs Susan, ties her up, and locks her in a room! She then goes back to the party like nothing happened!

While at the party, new police commissioner Eli Grant (Lamon Archey) receives a call with stunning information; Kristen DiMera is alive! Xander Kiriakis (Paul Telfer) had flipped on Kristen and turned her in! He tells Hope Brady (Kristian Alfonso), who is also at the party, and she relays the information to John , who has been getting suspicious about “Nicole” after hearing many guests tell him bizarre stories of interactions with her, including Marlena! Kristen’s antennas go up and she tries to get Brady to leave the party early with her, but he doesn’t want to leave!

She tries to leave only to be stopped by John, who confronts her about a few things and they start to argue; in the Days of Our Lives weekly promo video and promo stills, it appears he tries to keep her from leaving and grabs her by the hair, which comes off, along with the mask, right in front of Brady, god and everybody else! She then feels totally cornered and pulls a gun on Marlena, and it goes off! That will probably be this Friday’s cliffhanger! Brady will demand answers while Sarah Horton Brady (Linsey Godfrey) will comfort a reeling Eric!

As previously mentioned, Tony asks “Nicole” for a divorce so Anna won’t marry Roman. Anna can be seen in the weekly Days of Our Lives promo video giving “Nicole” and Tony a dirty look as Tony approaches “Nicole” to talk to her. Roman Brady, (Josh Taylor) meanwhile goes along with Anna’s plan to make Tony jealous and puts an engagement ring on her finger, reluctantly. Anna and Tony, however will kiss, so maybe Anna understands why Tony couldn’t divorce “Nicole” once she sees she’s really Kristen and that Tony was under duress!

Days Of Our Lives Spoilers – Will And Sonny Kiriakis Bust Xander

Leading up to the big unmasking, Will and Sonny Kiriakis (Freddie Smith) decide to investigate their cousin Xander and sneak into his room at the Kiriakis mansion while he’s gone. They come across a secret box, possibly a lock box, and they break into it. Inside is a bunch of paperwork, possibly invoices showing Xander has been working for Kristen! Will mentions to Brady that Kristen may be alive. Meanwhile, Xander, in questioning at the Salem Police Department will indeed sing like a canary and flip on Kristen! He may even imply she’s been impersonating Nicole!

Meanwhile, fake Nicole and Gabi have some competition for DiMera, since Wei Shin (Michael Hagiwara) found there was another Mrs. DiMera who could run DiMera Enterprises. He approached Kate in Friday, August 16th’s episode and mentioned it, but she needed to think about it; after “Nicole” seemingly stood him up Friday and Gabi’s nowhere to be found, Shin will make a firm offer to Kate to take over DiMera this week.

Days Of Our Lives Spoilers – JJ Deveraux And Haley Chen Decide To Move, Leaving Tripp In The Lurch

JJ Deveraux (Casey Moss) will talk to Haley Chen (Thia Megia) about moving out of the loft, which of course will leave Tripp Dalton (Lucas Adams) in the lurch and needing another roommate to share expenses, but considering Haley was getting post-traumatic stress disorder symptoms and flashbacks of Claire Brady (Olivia Rose Keegan) coming after her with a lighter, and hallucinations of her killing Tripp, JJ probably feels like the loft is not the best place for them to live!

She may feel bad for leaving Tripp in the lurch financially, but she will probably finally agree after some talking. Meanwhile, Tripp has been falling for Haley, which of course makes it an awkward situation all around, and he admits his feelings to Dr. Kayla Johnson (Mary Beth Evans) this week.