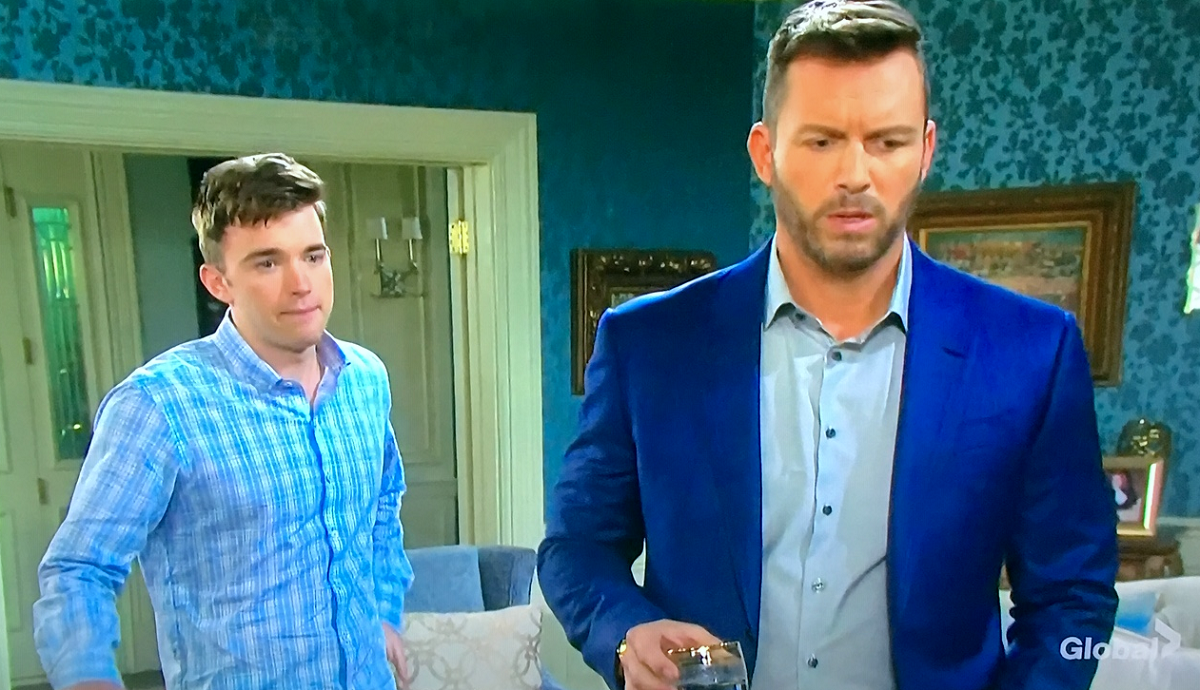 Days of Our Lives (DOOL) recap for Tuesday, August 20, 2019 reveals Marlena Evans (Deidre Hall) calls Chloe Lane (Nadia Bjorlin) to make sure that the party is set for tonight.

Marlena says John Black (Drake Hogestyn) thinks they are just having dinner. John hears Marlena talking about a secret and asks Marlena what she is hiding from him. Marlena tells John about her visit to Nicole Walker (Arianne Zucker). John wants Marlena’s opinion on what is going on with Nicole. Marlena says Nicole is unstable in her opinion.

Days of Our Lives Will Horton (Chandler Massey) tells Brady that he believes Kristen DiMera (Stacy Haiduk) is alive. Brady says Xander Cook (Paul Telfer) worked for Kristen in Nashville. Brady says maybe Maggie did see Kristen when no one believed her. Brady tells Will about the anniversary party.

Brady tells Will that Susan Banks (Stacy Haiduk) is the only guest not on both lists. Brady tells Will that he invited Susan, but she hasn’t RSVPd. Will says Susan may show up. Brady asks Will to run interference. Will teases Brady before agreeing. Sonny arrives and tells Brady and Will about his run-in with Nicole. Sonny tells Will how Nicole was acting and how he saw Gabi’s phone there. Sonny says he texts Gabi again and she’s still not responding.

Days of Our Lives Tripp Dalton (Lucas Adams) tells Kayla Johnson (Mary Beth Evans) about his feelings for Haley Chen (Thia Megia). Kayla understands how tough it is to have feelings for someone that aren’t returned. Tripp says he is going to offer to switch rooms with J.J. Deveraux (Casey Moss) and Haley. Haley and J.J. are at the loft, talking about her issues. She is the bravest person J.J. knows. J.J. wants to be there from now on no matter what it is.

Haley wants to do that same for J.J. Kayla tells Tripp she loves him and he leaves for home as J.J. and Haley starts to make out on the couch. Tripp walks in and realizes it is getting to him. Tripp apologizes for trying to help Haley. Haley apologizes for J.J. as well. Tripp gets ready to change to leave, J.J. stops him. He doesn’t want Tripp to feel like he has to stay away from his home. J.J. thinks he and Haley should move out of the loft.

Days of Our Lives Kristen puts Gabi Hernandez (Camila Banus) in the wine cellar with Stefan DiMera (Brandon Barash). Stefan tries to figure out how he got there before he sees Gabi and rushes to her. Gabi wakes up, and Stefan informs her that Kristen locked them in the wine cellar. Stefan tells Gabi that Kristen is back to get rid of the two of them. Stefan tells Gabi he saved her then Kristen knocked him out.

Gabi tells Stefan that Kristen is Nicole – she fought with Nicole and pulled her face off and was facing Kristen. Meanwhile, Kristen is upstairs trying to figure out what to do with Stefan and Gabi. Stefan tells Gabi about his conversation with Ben Weston (Robert Scott Wilson) and Ciara Brady (Victoria Konefal). Stefan doesn’t understand why he didn’t see this all along. Gabi wants to know why Stefan saved her if he hates her so much.

Days of Our Lives Sonny Kiriakis (Freddy Smith) continues to knock on the door, and Kristen ignores him. Sonny goes in as Kristen is gathering her stuff to leave. Kristen manages to get her Nicole mask on before Sonny walks into the room. Sonny needs to see Gabi, Nicole claims to be working alone. Sonny finds Gabi’s phone and says she would never leave it. Sonny goes upstairs to get a bathing suit. Brady calls Nicole and asks her to meet him in her room. Brady tells Nicole that he wonders if Kristen is still alive.