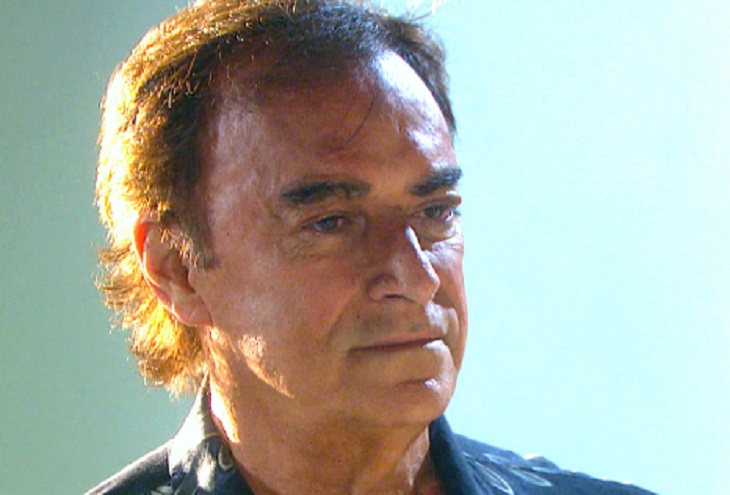 Days of Our Lives spoilers tease that Eli Grant (Lamon Archey) and Lani Price (Sal Stowers) will soon arrest Tony DiMera (Thaao Penghlis) on Days of Our Lives; but why? Did Kristen DiMera (Stacy Haiduk) flip on him and accuse him of Ted Laurent’s (Gilles Marini) murder, now that she’s been exposed?

As Days of Our Lives viewers know, Kristen has made threats to Tony to keep him under her thumb and as her husband – or, actually, Nicole Walker’s (Adrienne Zucker) husband – until she successfully completes her plan to take over DiMera Enterprises from Stefan and Gabi DiMera (Brandon Barash, Camila Banus). She made him mad with her intimidation and refusal to let him go be with the love of his life, Anna DiMera (Leann Hunley) who has returned to Salem not knowing he was alive all these years, and then announcing her engagement to Roman Brady (Josh Taylor) who was shocked as it was the first he heard of it!

Anna is playing hardball with Tony, and will call off her marriage to Roman if he divorces “Nicole”! Kristen will be exposed right in front of Brady Black (Eric Martsolf) and everyone else when John Black (Drake Hogestyn) pulls her hair and her mask comes off along with the wig!

Kristen’s exposure will lead to Stefan’s exoneration, once he and Gabi are found and rescued from the secret room in the DiMera mansion where Ted and Kate DiMera (Lauren Koslow) were trapped. Promo stills from the anniversary party showing John holding the mask and wig also show a shocked Sonny Kiriakis (Freddie Smith) standing with Kate.

Soap Opera Digest Early Edition spoilers say he and Will Horton (Chandler Massey) will rescue Stefan and Gabi, possibly with Kate leading the way since Will and Sonny may not know about the secret room or how to get into it. Kristen will be in danger of arrest then, both because of her entrapment of Stefan and Gabi and Xander Kiriakis (Paul Telfer) makes a deal with Hope Brady (Kristian Alfonso) and John and flips on Kristen. In addition, Sonny and Will had previously found his secret box in his room and broke into it, revealing financial records of payments from Kristen.

Kristen will react like an animal who’s been cornered, and grab whatever she can to defend herself and deflect police suspicion away from herself for Ted’s murder, and she may flip on Tony, but spin it like a premeditated murder instead of self-defense, which is actually what it was. As Days of Our Lives viewers will recall, Tony originally wanted to call the police before things went too far after he and Ted struggled for the gun and it went off, killing Ted at very close range.

But Kristen chose to drag Ted’s body in an old trunk over to Ted’s apartment and Stefan discovered the body, being in the wrong place at the wrong time and doing the wrong thing (holding the gun!) Kristen didn’t even have to take the step of calling the police, they were already on the way after Stefan called Eli and left him a message about his suspicions and also telling him Tony was alive and Eli was headed out to investigate the report. So the first thing she will probably think of is to deflect suspicion to Tony for the murder!