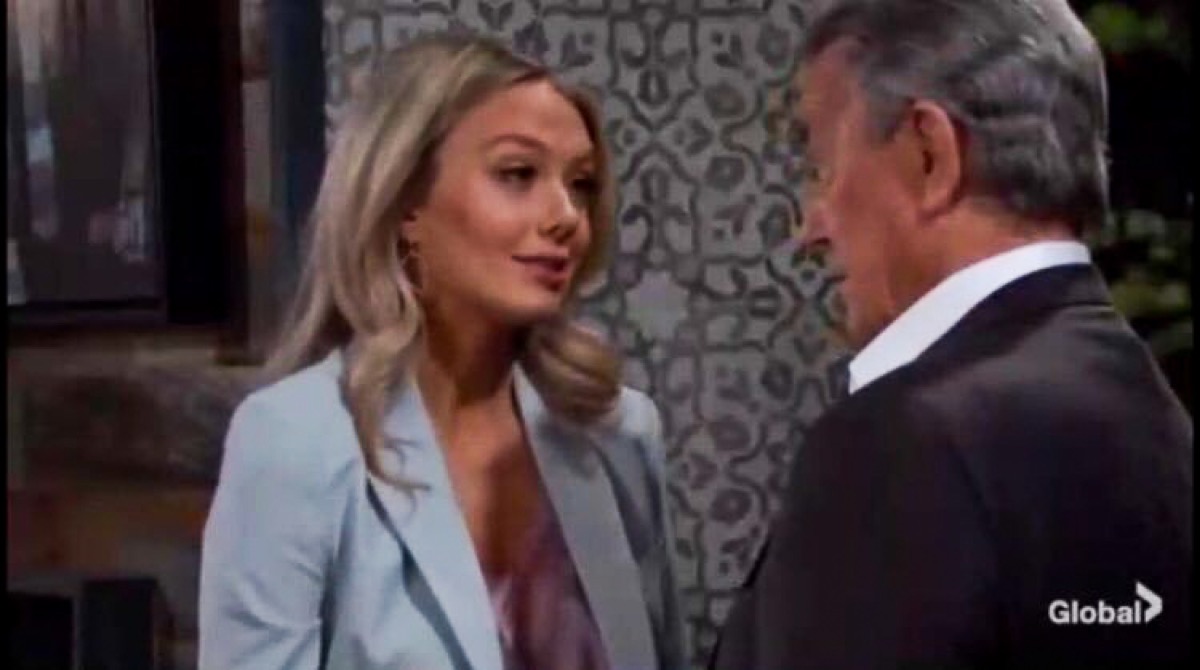 “The Young and the Restless” spoilers for Wednesday, August 21, tease that Victoria Newman (Amelia Heinle) will grow increasingly worried about Billy Abbott (Jason Thompson). At home, Victoria realizes Billy forgot to pick up Johnny Abbott (Holden and Ryan Hare) as planned. He confesses that he still isn’t sleeping the greatest and has been on edge, so Victoria heads off to handle pickup.

Billy ends up at Society, where a merger meeting gets underway. Summer Newman (Hunter King) is there, but she’s focused on Theo Vanderway’s (Tyler Johnson) text about being busy. She bails along with Abby Newman (Melissa Ordway) eventually, so that leaves Billy to argue with Jack Abbott (Peter Bergman) and Ashley Abbott (Eileen Davidson).

Billy contends that Ashley will inevitably betray them again. Ash feels John Abbott (Jerry Douglas) would support this merger and reminds Billy of his own blunders. Jack feels like Billy’s Delia Abbott (Sophie Pollono) issues are getting to him. He wonders if this is about what they discussed recently, but Billy insists he can’t trust Jack and dashes off.

At Crimson Lights, Phyllis Summers (Michelle Stafford) is surprised by Billy’s request for a meeting. The beat around the bush a little, but Phyllis wants to get to the point. Billy’s hoping to score info on what Adam Newman (Mark Grossman) is up to. Phyllis talks about her latest blowup with Adam, but she’s sick of them being the only two people held accountable for anything.

Billy mentions Chelsea Newman’s (Melissa Claire Egan) newly acquired fortune, which will be important later. He also rants about Adam never paying for his mistakes. Billy makes it clear that Phyllis had better be on the right side of this war or she’ll risk becoming collateral damage.

Back with Jack, he pays Victoria a visit to talk about Billy’s problems. They’re both concerned over Billy’s struggles, but Victoria isn’t sure he even wants to get better. Billy is haunted by his dreams of Delia, but he feels those dreams keep her close. Afterward, Jack chats with Celeste Rosales (Eva LaRue) about life, love and brother battles. He’s bummed to learn Celeste will be heading back to Miami soon.

Meanwhile, Theo gets offered a full-time job at LP. He suggests his talents could be put to better use as the head of Power Communications, but Devon Hamilton (Bryton James) is annoyed. He’s not going to hand over Mariah Copeland’s (Camryn Grimes) position.

However, Devon argues that Theo is free to talk to Mariah himself and see if he can work under her. Theo make his pitch later, but Mariah keeps her guard up. She ultimately hears Theo out as he praises himself and insists his expertise will take Power Communications to new heights. Mariah counters that she might go after Theo’s clients herself and make his agency obsolete.

Over with Summer, she fills Phyllis in on Zoe Hardisty’s (Anna Grace Barlow) party past with Theo and Kyle Abbott (Michael Mealor). Phyllis advises her daughter to only see Theo again on her terms. Later, Summer approaches Theo and they address the Zoe situation. Theo brought her to the wedding reception because he likes blowing things up. Summer ends up sharing a kiss with him.

In the park, Adam insists marrying Sharon Newman (Sharon Case) is what he wants. Sharon mentions how she pushed Adam to stay away. She also questions how Chelsea factors in here, but Adam feels he belongs with Sharon. They have a deep connection and need each other. Adam notes that he could let the rest of the drama go if he had Sharon back, which she finds manipulative.

Nevertheless, Adam wants Sharon to be honest about her feelings. He advises her to give his proposal some thought and leaves her to it. Back with Phyllis, she bumps into Adam and notes that she’s found a source of money for her hotel stake. Phyllis gloats about pushing Abby out eventually, but Victor Newman (Eric Braeden) overhears and rats her out ASAP.

Young And The Restless Spoilers: Will Jack And Victor Bond Over His Dire Diagnosis?

While Phyllis calls Chelsea and leaves a voicemail, Victor warns Abby about Phyllis’ plans. Abby feels confident in her ability to hold her own against Phyllis, but Victor’s still fearful. He notes that Phyllis is toxic and gives Abby some things to mull over.

Once Adam’s back at the penthouse, he grins when Sharon arrives. Adam’s expecting good news, but a rejection’s brewing instead! “The Young and the Restless” spoilers say there’s much more drama to come, so we’ll give you updates as other Y&R details and rumors emerge. Stay tuned to see what’s next in Genoa City.