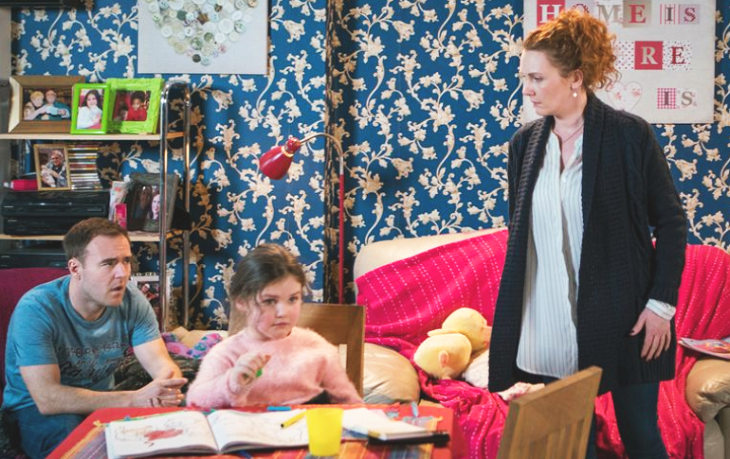 Talk about a firestarter! Coronation Street spoilers tease that Weatherfield’s one and only ‘demon child’ Hope Stape (Isabella Flanagan) will try to blow up the Cobbles in a scene that you’ve got to see to believe. Here’s what you need to know.

According to Britain’s The Sun, Hope – who is the young daughter of serial Killer John Stape (Graeme Hawley) – was last taken to Birmingham by her mother Fiz Stape (Jennie McAlpine) after she couldn’t control her erratic and bizarre behavior.

Things got really bad when Hope tried to convince her cousin that he could fly by trying to get him to jump from a great height to another.

Coronation Street Spoilers – Framed Her Sister For All Of Her Misdeeds

Of course, it was a dangerous idea that could have easily left him dead. If that weren’t enough, she also framed her sister for all of her misdeeds, including that one time she set her trampoline on fire. Simply put, there really isn’t anything that this child isn’t willing to do.

And now that Hope is back it looks like she is up to her old tricks. And no, the time she spent in Birmingham didn’t help her, either.

One source told The Sun that Hope is going to take matters into her hands by hiding a lighter in her doll’s head before she goes exploring on her own. Hope will find herself in the builder’s yard, where according to her, she thinks is the perfect pace to cause a little mischief.

Coronation Street Spoilers – Will Hope Stape Be Rescued In Time?

A Coronation Street insider explained, “Setting fire to some materials, Hope thinks she can make a quick escape but it quickly becomes clear she is trapped with her own furnace. And when the fire gets dangerously close to some full gas canisters the entire cobbles is in danger.”

Yikes! Coronation street spoilers tease that Hope will be rescued in time and that the fire will be put out.

But this won’t be the one and only time that Hope will try to do cause a little mischief as clearly she’s got a lot up her sleeve! Fans will have to tune in for all of the chaos! Keep up with Hollywood Hiccups for all the latest news right here!