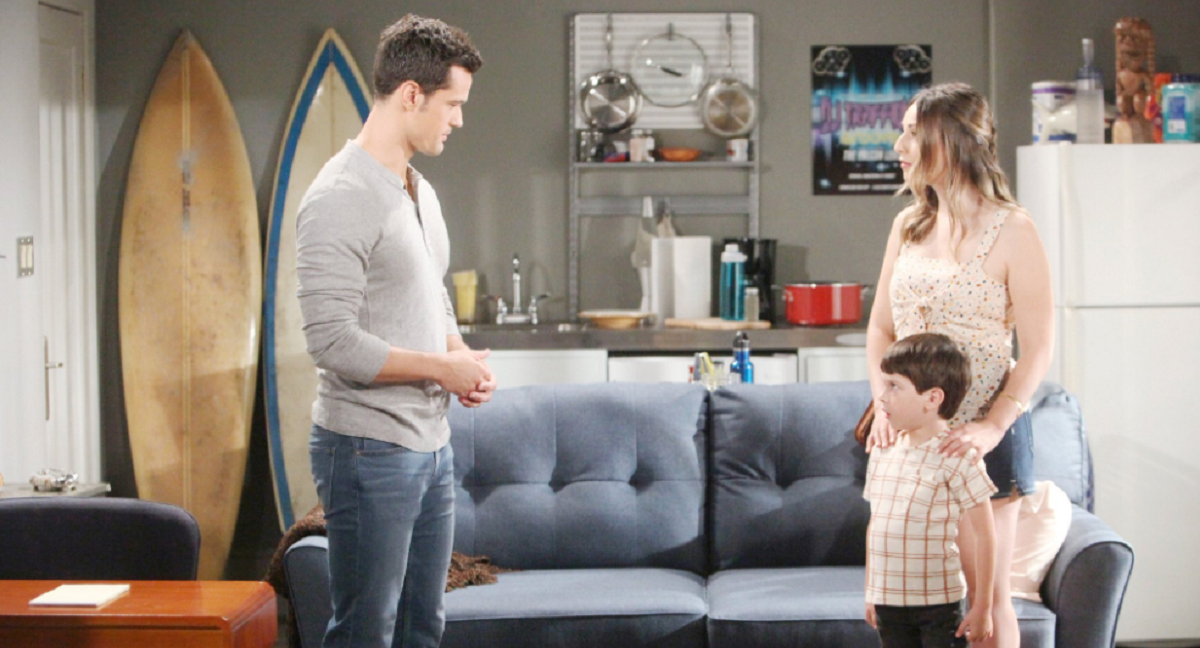 The Bold and the Beautiful spoilers for Thursday, August 22, tease that Thomas Forrester (Matthew Atkinson) will be enraged after talking to Hope Logan (Annika Noelle) by phone. As B&B viewers know, Thomas just can’t accept it that Hope is filing for an annulment of their marriage, and as he listened to her tell him that their marriage is over, he started acting very strangely.

On Thursday’s episode of B&B, Thomas will continue to break down, and he’ll be looking for someone to blame for his marriage ending. As B&B viewers know, he’s spoken terribly about his son, calling him a “brat” and blaming him for telling Hope and Liam Spencer (Scott Clifton) the truth about Beth Spencer (River Davidson and Madeline Valdez) being alive.

It looks like he’ll continue to blame Douglas Forrester (Henry Joseph Samiri), even going so far as to blame him for Hope’s decision to end their marriage. Of course, B&B viewers know that this is simply irrational thinking, since it is Thomas’ own fault that his marriage is blowing up in his face. He’s the one who kept Beth’s existence a secret from Hope and married her under false pretenses.

Bold And The Beautiful Spoilers – Douglas Forrester Brought To His Father

Unfortunately, it looks like Douglas is going to be in for quite a horrible interaction with his father. According to B&B spoilers, Thomas will contact Steffy Forrester’s (Jacqueline MacInnes Wood) nanny Amelia (Nicola Posener). It seems that Amelia will be watching Douglas for the day, and Thomas will ask Amelia to bring Douglas to him at Vincent Walker’s (Joe LoCicero) apartment.

Bold And The Beautiful Spoilers: Authorities Shift Their Focus To Thomas – Can He Be Redeemed?

Of course, Amelia will probably be in the dark about what’s happened with Thomas recently – after all, the Forresters have been keeping the Beth story out of the press and have been handling it as a private family matter. Amelia simply may not know that Thomas poses any kind of threat to Douglas at this point.

After Amelia takes Douglas to the apartment, a disturbing turn of events will follow. Thomas will proceed to yell at Douglas for telling the secret about Beth. He’ll seriously lash out at the little boy, and according to B&B spoilers, Douglas will be really scared. As B&B viewers know, Thomas has been mean to Douglas in the past, but this time will be a real escalation and quite disturbing.

This will show just how off the rails Thomas is at this point. Hopefully, Douglas won’t have to endure too much of his father’s rage. Perhaps Vincent or Amelia will remain nearby and can put a stop to this inexcusable behavior on Thomas’ part.

Meanwhile, on Thursday’s new episode of B&B, Ridge Forrester (Thorsten Kaye) will be in bad shape. As B&B viewers know, he is very worried about Thomas. He’d just like to talk to his son and hear from him about what he’s done and why, but the more time that goes by, the worse things look for Thomas.

Of course, Detective Alex Sanchez’s (Jeremy Ray Valdez) visit didn’t help calm Ridge’s nerves any. He doesn’t want to believe that Thomas could have been responsible for Emma Barber’s (Nia Sioux) death, but deep down it looks like he’ll be worried about the possibility.

Ridge will apparently be feeling pensive, and on Thursday’s episode of B&B, he’ll open up to Brooke Forrester (Katherine Kelly Lang) as he tries to come to grips with what’s going on with Thomas. Ridge will start to blame himself for Thomas’ failures.

Of course, it’s natural for parents to wonder what they might have done differently that could have prevented this or that with their kids. But it seems that Ridge will start to wonder if he failed Thomas, and if that’s why Thomas is having all of these issues now.

According to B&B spoilers, Ridge will open up to Brooke about what he believes is his biggest failure in lie, and it appears that it will have to do with his failure as father to Thomas. He’ll think back on Thomas’ troubled history and wonder if he made mistakes as a dad that ultimately led Thomas to where he is now.

It looks like Brooke will be supportive of Ridge and will reassure him about his parenting abilities. She’ll probably point out that Ridge has been a great father, but that ultimately Thomas is an adult who has made his own bad decisions. She’ll be there to support Ridge and help him cope with what Thomas has done.