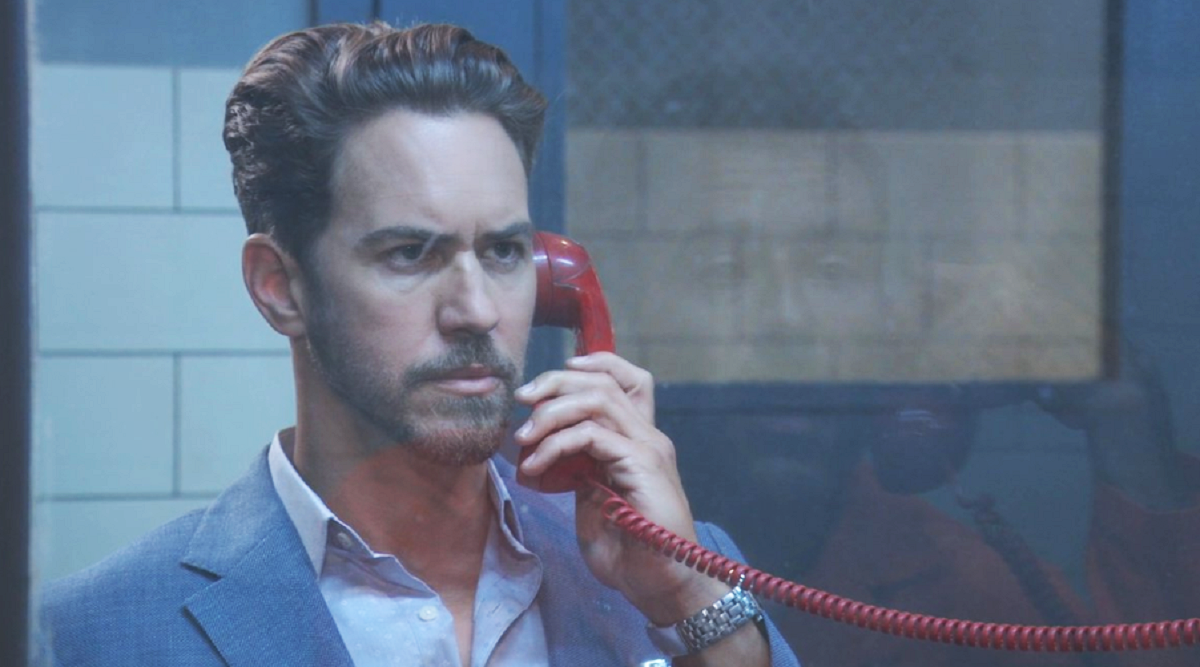 Hayden bumps into Hamilton Finn (Michael Easton) at GH. Hayden needs to speak to Nina Reeves (Cynthia Watros) about Crimson. She thinks Finn sees her as cold and heartless. Finn is proud of Hayden for helping Liz. Finn tells Hayden he’s glad she came home. Hayden gets a phone call and talks to her daughter. Finn gets a call from Anna and asks about her day.

General Hospital’s Curtis Ashford (Donnell Turner) approaches Finn and wants to speak to Anna Devane (Finola Hughes). Finn says Anna is still out of town. Curtis needs to get in touch with Andre Maddox (Anthony Montgomery). Curtis then goes to Liz’s to give her a message from Drew Cain (Billy Miller).

Curtis tells Liz that Franco found the money and is determined to take the money back to Afghanistan. He tells Liz that Drew took the money. Curtis has a location on Andre as well. Curtis calls Drew who changes his flight plan and looks for Andre. Liz thinks Andre can figure out how to reverse this procedure.

General Hospital’s Kevin Collins (Jon Lindstrom) approaches `seeing a psychic to contact Kiki Jerome (Hayley Erin). Ava tells Kevin that Kiki has approached her. Ava tells Kevin that Kiki was at the foot of her bed but just stared at her. Kevin asks what Chelsea Lambas (Jen Ray) said about this. Ava thinks Kevin can tell her about the dream. Ava thinks Kevin should meet Chelsea. Kevin says that message was an unfulfilled wish.

Ava says it hurts her that Kiki won’t talk to her. Kevin says the dream is about what Ava is trying to tell herself. Ava questions Kevin about Franco. Franco walks in, and Ava calls to him. Kevin invites Franco to join them, he declines. Kevin gives Franco his card and leaves. Franco wants the real story from Ava. Ava tells Franco they are kindred spirits. Ava tells Franco she betrayed someone she loved. Ava tells him not to blow the change to reinvent himself. Franco thanks Ava for interesting conversation. Franco asks Ava for Kim’s number.

General Hospital’s Willow Tait (Katelyn MacMullen) arrives at Charlie’s to find out that Julian Jerome (William DeVry) has sold it and is moving to Manhattan. Lucas Jones (Ryan Carnes) updates Willow on Julian’s plans. Kim Nero (Tamara Braun) arrives, and Julian tells her that Olivia Falconeri (Lisa LoCicero) wants to buy the restaurant. Kim wants to leave tonight, Julian asks if she has seen Franco, she has.

Julian tells Kim that Franco is not Drew. Julian asks what she is afraid of with Franco. Lucas shows Willow pictures of Wiley Cooper-Jones (Theo and Erik Olson). Willow believes that Shiloh is no longer a threat, and Wiley is happy. Kim claims to want to follow through with her decision now. Kim wants Julian to fast track the closing of the sell.

Dustin brings Lulu another drink, but she refuses. Lulu tells Dustin she is changing her byline and drivers license. Dustin says he is sorry but then says he’s not. Lulu shows Dustin pictures of her kids. Maxie tells Dustin that Rocco Falconeri (O’Neill Monohan) loves to play ball. Dustin and Lulu prepare to leave the park.

General Hospital’s Peter August (Wes Ramsey) is at Pentonville, and Shiloh Archer (Coby Ryan McLaughlin) Peter get him out of prison, or he tells everyone that Peter was behind Drew’s kidnapping. Shiloh plans to plant seeds of doubt and let Robert Scorpio (Tristan Rogers) take it from there.

Peter asks how he knows Shiloh would stay silent if he got him out of Pentonville. Shiloh asks what choice Peter has. Nelle Benson listens outside the visitor’s room door. Peter hangs up on Shiloh and walks out. Peter calls Maxie and wants to meet in twenty minutes at the Metrocourt.

The prison is put on lockdown and Nelle is locked in a room with Shiloh. Nelle tells Shiloh she has heard about him and the baby he is trying to steal. Nelle wonders how Shiloh is going to beat all those charges and take Willow’s baby. Nelle tells Shiloh about the ELQ shares. Nelle wants to finish this conversation because the Quartermaine’s owe her too.

General Hospital’s Peter meets Maxie at the Metrocourt intent on telling her about his connection to Helena Cassadine. Maxie tells Peter she loves him and he stops talking. Peter tells Maxie he loves her too. Peter lies about his visit with Shiloh. Lulu tells Maxie not to do that again. Maxie tells Lulu that she and Peter love each other. Lulu wants more interesting stories now. Maxie tells Lulu that Shiloh wanted to sell his story to the paper. Peter goes back to visit Shiloh. Peter agrees to help Shiloh.