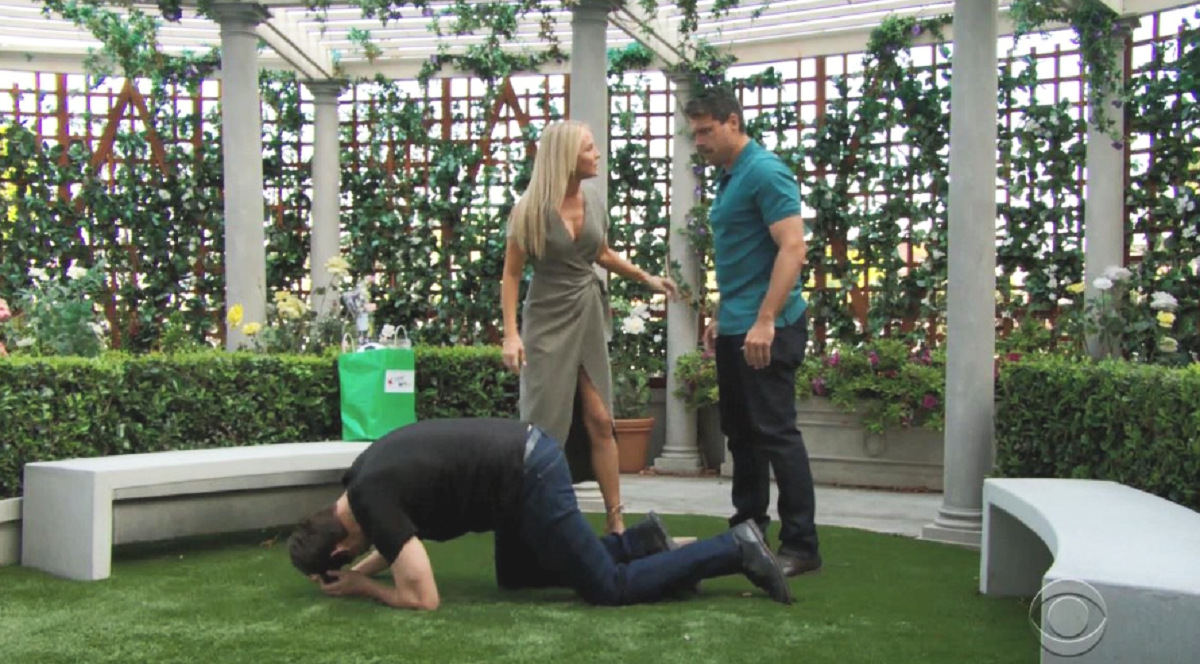 The Young and the Restless spoilers tease that Sharon Newman (Sharon Case) hasn’t bought into Adam Newman’s (Mark Grossman) gambit. Nick Newman (Joshua Morrow) serves as a source of comfort in response to that choice, contrasting her first love verses whatever his brother is, or will become to Sharon.

Of course, a gambit isn’t a decisive, or last move, but a first foray. That’s what Adam’s calculation represents in asking Sharon to marry him, a question that wasn’t exactly surprising when reflecting upon this man’s history.

Sharon recognizes that Adam’s latest play on her emotions is motivated by factors that he didn’t anticipate. As she told him on more than one occasion, Chelsea Newman (Melissa Claire Egan) was he first person he wanted to reconnect with in Genoa City, Wisconsin.

After regaining his memory, Adam instantly recalled that he was married to Chelsea and had a son, Connor Newman (Judah Mackey). Adam understandably assumed that Chelsea’s last name was still Newman, rather than the moniker she took from Calvin Boudreau (John Burke).

Young And The Restless Spoilers: Billy Suffering Terribly – Is He Haunting Himself?

Sure, Sharon knows that Shadam was intense during the early part of this decade. She and Adam (as then played by Michael Muhney) had their moments, including epic episodes that were recorded in New Orleans, Louisiana.

But Chadam supplanted Shadam, Chelsea had Adam’s first-born child, and they were scheduled to fly away from GC to another life until the cabin exploded. Chloe Mitchell’s (Elizabeth Hendrickson) September 2016, revenge scheme failed, as viewers and key GC residents learned this spring.

Skipping to Nick. He’s been forced to battle his brother due to Adam’s inability to generate gratitude, or compassion for all that Morrow’s character did for him while he was presumed dead.

Adam’s desire to take custody rights from Nick are steeped in Chelsea’s adamant choice to not rekindle their relationship, while also retaining full control of their son. So Adam is opting to fight his ex-wife and detested brother by using Michael Baldwin (Christian Le Blanc) in order to try and gain legal control of Connor.

Nick knows that Adam still has an effect on Sharon and has told her as much recently. She recognizes those feelings, which makes her talk with Nick intriguing and revealing.

Young And The Restless Spoilers – Which Couples Will End Up Reuniting?

Sharon knows that part of Adam’s gambit was to infuriate Nick by trying to re-team with her. Fans will learn which former pairing will happen, if any, as this interlocked storyline plays out. Shadam, Chick, Chadam, or Shick?

All options appear to be open, with any of the four suggested couple revivals potentially sparking the remaining two characters to pair again as well.