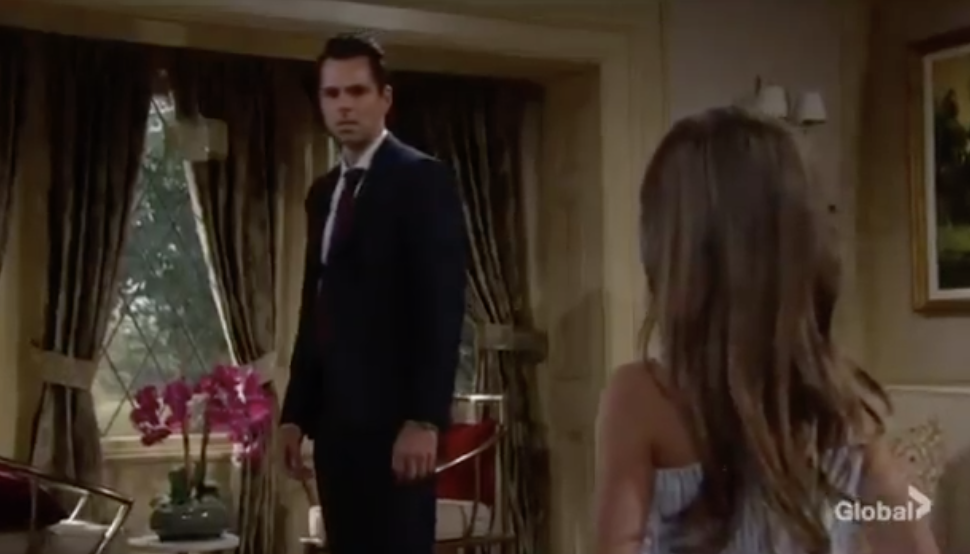 “The Young and the Restless” spoilers for Monday, August 26, tease that Nick Newman (Joshua Morrow) will have a chat with Billy Abbott (Jason Thompson). At Billy and Victoria Newman’s (Amelia Heinle) place, Nick expresses his gratitude to Billy over a visit with his son. Billy’s anger against Adam Newman (Mark Grossman) is evident as usual. He insists Adam shouldn’t be around Christian or any other child.

The Young and the Restlesss Spoilers – The Newman Family Meeting

Victoria shows up and quizzes Nick about the upcoming Newman family meeting, but Nick lets Victor Newman (Eric Braeden) explain later. In the meantime, Abby Newman (Melissa Ordway) gets reassurance from Nikki Newman (Melody Thomas Scott) that this isn’t about Victor’s illness. Adam eavesdrops before the meeting ultimately gets underway.

Victor warns the whole gang that Adam could retaliate due to the restraining order. He wants everyone to be prepared for whatever comes next. Adam eventually waltzes in and needles his siblings. Nick makes it clear that Adam will never be part of the family. However, Adam admits he’s got a peace offering. He gives Nick a document that shows he’s dropping the custody case.

Y&R Spoilers – The Newmans To Be Taken Down

Victor suspects there’s some sort of catch, but Adam notes that this is what’s best for Christian. He doesn’t want his son caught in the crossfire of the battle that’s brewing. Adam vows not to just destroy one or two of the Newmans. He wants to take them all down and destroy the Newman myth. Adam intends to bring all their skeletons out of the closest and expose their true colors to the world.

After Adam heads home, he’s surprised to see Phyllis Summers (Michelle Stafford) there. They commiserate about their Newman problems before Phyllis offers to play for Adam’s team. Adam wants to bury his family and Phyllis thinks she can help accomplish that. After Adam agrees to join forces, they clink glasses to seal the deal.

At the police station, Chloe Mitchell (Elizabeth Hendrickson) and Kevin Fisher (Greg Rikaart) are deeply dismayed over their arrests. Michael Baldwin (Christian LeBlanc) manages to calm them down long enough to explain. He had to go through the motions of arresting Kevin due to the public punch. As for Chloe, she’s going to be charged with arson, but he’ll recommend probation and out-patient treatment because of her mental illness.

Chloe learns she’ll make bail later, so she joins Kevin in hugging Michael. Afterward, Chloe embraces Esther Valentine (Kate Linder) at the Chancellor mansion and gets a bit emotional. She tells Bella Fisher that Mommy’s home before sharing a warm moment with Kevin.

Back at Billy and Victoria’s place, she finds him out of it on the couch and questions why he’s not at work. Billy doesn’t want Phyllis on his back about it. He’s irritated when Victoria mentions the gum habit he’s developed. After Billy leaves, Victoria opens up to Nick about her concerns. She feels like the trouble for Billy all started when Adam returned to town.

Billy ends up spying outside the Chancellor mansion before going inside. He hears Delia Abbott’s (Sophie Pollono) voice telling him to stop Adam and assures her he will. Billy asks if he can see Delia and gets confused when Bella appears. He grabs Bella to hug her, so she lets out a scream. Billy’s sorry to have spooked the kid and is happy Chloe’s going to be free. He lets Chloe know he’s all right, but he obviously isn’t. Billy chews another stick of gum once he departs.

At Devon Hamilton’s (Bryton James) penthouse, he’s made Elena Dawson (Bryton James) a special breakfast to celebrate her first day as a resident. Unfortunately, their plans are derailed when Nate Hastings (Sean Dominic) arrives to carpool. Elena chats with Nate on their break later about a case and gets praised for her good instincts. She grills him about his romance, so Nate admits he’s OK with going by Abby’s rules for now.

Elena heads back to the penthouse once the workday’s over and bypasses giving Devon the scoop. She’s eager to thank him for his breakfast efforts earlier, so they prepare to hit the sheets. Back with Victor, Nikki fears he’s gotten too tired from the latest round of Newman drama. Victor does his best to reassure his love.

“The Young and the Restless” spoilers say some exciting scenes are on the way. We’ll give you updates as other Y&R news and rumors emerge. Stay tuned to see what’s next in Genoa City.