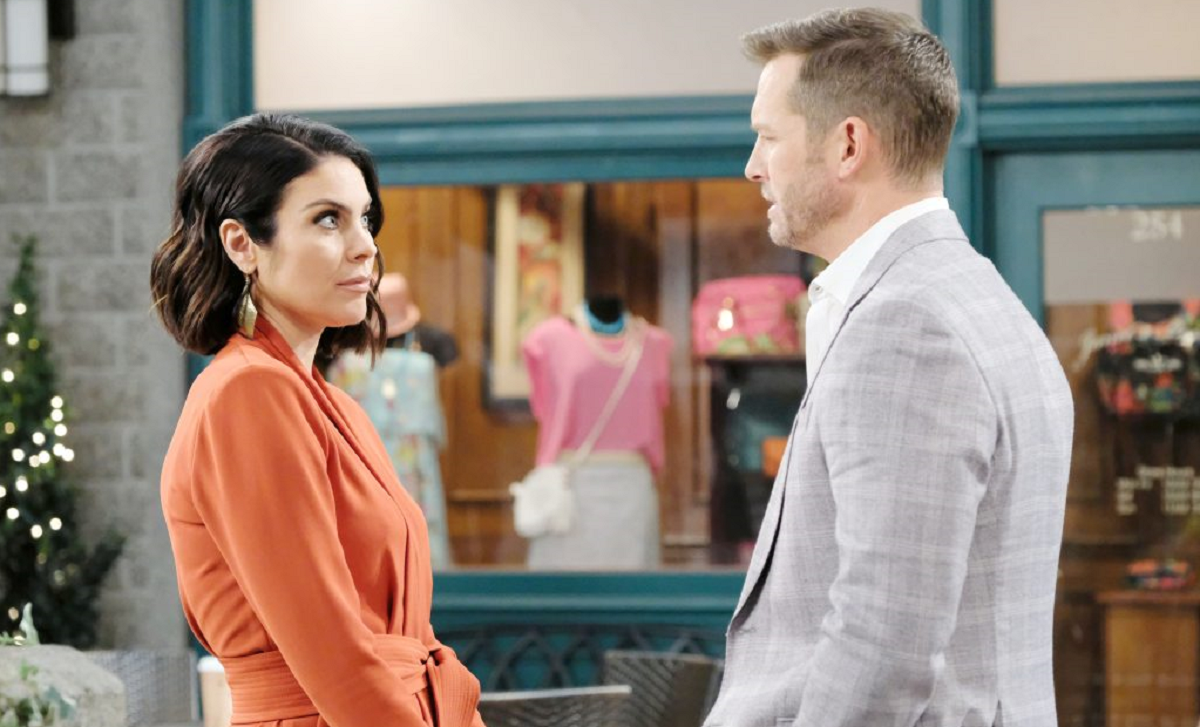 Days of Our Lives spoilers reveal Nadia Bjorlin’s final air date. During an interview, the actress also discussed how Chloe Lane leaves Salem and talks about love triangles, the DiMeras and more. Keep reading to find out everything she had to say!

The actress wrapped up filming months ago. However, due to the filming schedule, Days of Our Lives spoilers confirm her last air date will be on August 29.

Nadia Bjorlin has come and gone from the NBC soap opera several times during the past 20 years. However, she admits that this is the most anticlimactic exit she has ever done.

“Out of nowhere, Chloe’s like, ‘Oh, I’m trying to plan these parties for John (Drake Hogestyn) and Marlena (Deidre Hall) but I have this audition in New York City tomorrow for a season to sing for an opera company.’ And then she goes and does the audition and is like, ‘Oh, I got the job. I guess I’m going. Bye! That’s really all it was.”

Days of Our Lives spoilers tease Chloe Lane’s exit story will have her saying goodbye to Brady Black (Eric Martsolf). But fans have to be curious why Chloe wouldn’t be part of the search to find Nicole Walker (Arianne Zucker) and her daughter, Holly. After all, Chloe was the surrogate and Nicole’s on-and-off again best friend. Plus, Chloe was Holly’s guardian after Nicole “died.” Now she is just leaving town at the drop of a hat before the baby is found?

Days of Our Lives spoilers suggest there are more love triangles coming up. Even though Chloe won’t be part of any, Bjorlin thought she would have been involved in at least one prior to her exit. First, there was Chloe and Stefan DiMera (Brandon Barash). As fans recall, Stefan ended up being seduced by Gabi Hernandez (Camila Banus). Just as soon as the Stefan/Chloe storyline started, it ended.

Some fans thought that Chloe would definitely be part of the Rex Brady (Kyle Lowder) and Sarah Horton (Linsey Godfrey) love triangle. It turns out Bjorlin thought so, too. However, the writers decided to take it in another direction and get Eric Brady (Greg Vaughan) involved. Even though the actress has been on the show for 20 years (her debut was in 1999), she hasn’t done a lot of work with the DiMera family. That is one thing she wished she could have experienced.

“When I started to finally get a bit of a story with the whole Stefan/Gabi stuff, I was excited to work in a different universe than I’m used to,” Bjorlin said. “I’ve never really worked with any of the DiMeras. It was fun to be on different sets that I was actually working on and not just walking through.”

For those fans that watched DOOL in the late 1990s and early 2000s, there were fan-favorite characters that had good storylines. What made this interesting is that most soap operas focused on the adults. Children and teenagers were seen once in a while, but were not the focus. During Bjorlin’s first run, she became part of several teen stories that focused on the teenagers and their own drama. Fans were able to grow up with them and those characters are now in their 30’s and 40’s.

Of course, many of the characters still exist, but have been recast over the years. Bjorlin was basically the last of the “original teens” that was still having recurring scenes today. She also feels that the soap opera is eliminating a group of characters that represents an entire age group.

“Personally, even though I’m trying not to be biased about it, it’s an odd decision to sort of wipe out the group that represents people in their 30s, I guess you could say.”