Days of Our Lives Spoilers And Recap: Monday, August 26 – Holly Is Alive; Tony Is Arrested 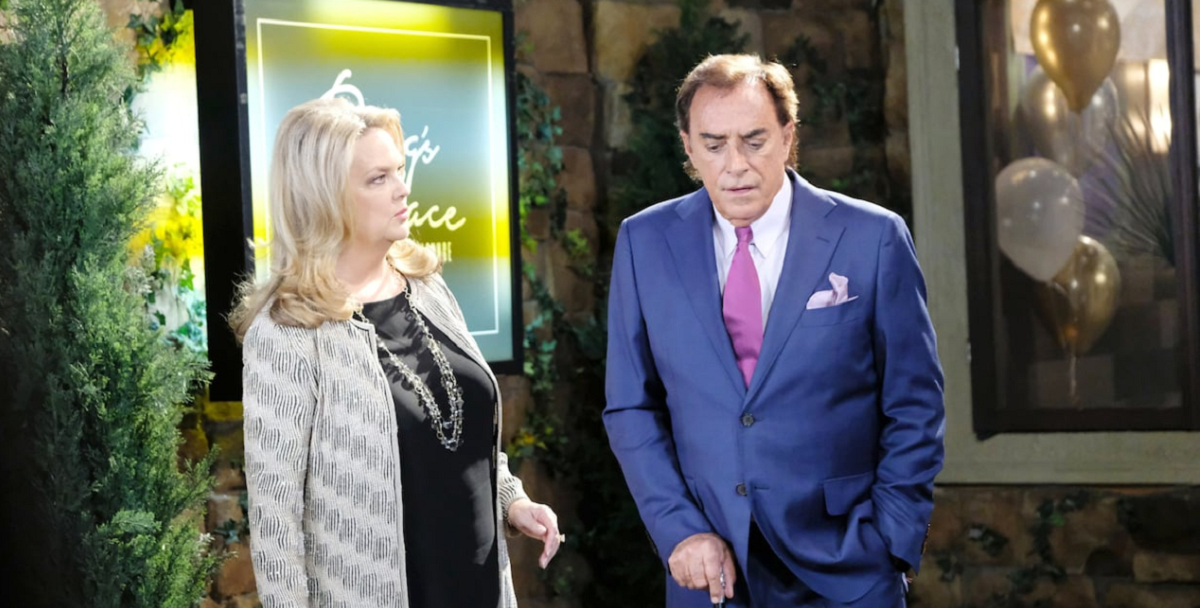 Susan wants a drink. Sonny gives Susan a double shot. Susan had to chew through ropes to escape. Sonny and Will realize that Kristen was impersonating Susan in Salem. Susan figures out that her gun was Kristen’s. Susan says Kristen made her look like a floozy. Susan should have known she was talking to Kristen. Sonny says Kristen fooled everyone. Will thanks Susan for saving Marlena. Will offers to call a cab to take Susan home.

Days of Our Lives Anna Dimera (Leanne Hunley) asks Tony Dimera (Thaao Penghlis) if Kristen made him kill someone. Tony tells Anna he took a man’s life. Tony tells Anna that he killed Ted Laurant (Gilles Marini). Tony also tells Anna that Kristen threatened to kill her if he got a divorce. Anna questions Tony about his decision. Anna is thrilled that Tony cares that much for her.

Tony tells Anna that he can be arrested as an accomplice. Anna wants to go to the police. Tony and Anna arrive at the police station. Tony confesses. Tony claims it was an accident. Anna tells every that Kristen was blackmailing Tony. Tony and Anna decide to get remarried. Tony gets arrested for murder.

Days Of Our Lives Spoilers– Sarah And Eric Update Maggie

Sarah tells Eric he has every right to grieve Nicole. Eric and Sarah arrive to see Maggie. Eric tells Maggie that Kristen crashed the party. Maggie questions how Kristen pulled this off. Maggie shocked that Tony married his sister. Eric and Sarah tell Maggie Kristen’s motives. Maggie learns that Xander was Kristen’s accomplice. Maggie rants at Xander for his part in the lie. Eric tells Xander he regrets getting caught. Sarah and Eric take their turn as well. Xander says he never hurt Holly. Xander says Holly is alive.

Days of Our Lives Xander Cook (Paul Telfer) has gotten out of trouble yet again. Xander advises Eli Grant (Lamon Archey) and Lani Price (Sal Stowers) to arrest Kristen. Lani tells Xander that Kristen is already in custody. Xander wants to know why Kristen isn’t in a cell. Lani and Eli want to know if Xander has more to add to his story. Lani and Eli try to get more information out of Xander. Xander leaves the station saying he has somewhere he needs to be.

Days of Our Lives Brady Black (Eric Martsolf) demands the truth from Kristen. Kristen tells Brady she loves him and didn’t kill anyone. Kristen promises to tell Brady the truth. Brady tells Kristen that Holly Jonas and Nicole are dead because of her. Brady accuses Kristen of shooting Ted, she says Tony did it.

Brady accuses Kristen of trying to blame Ted’s death on Tony. Kristen admits to taking Ted’s body to his apartment to cover for Tony. Kristen says it was dumb luck that Stefan Dimera (Brandon Barash) got the blame for Ted’s murder. Kristen would do anything to get Brady back, including telling the cops the truth. Kristen gives her statement to the cops. Brady asks for more time with Kristen. Brady wants Kristen to admit to killing Holly.