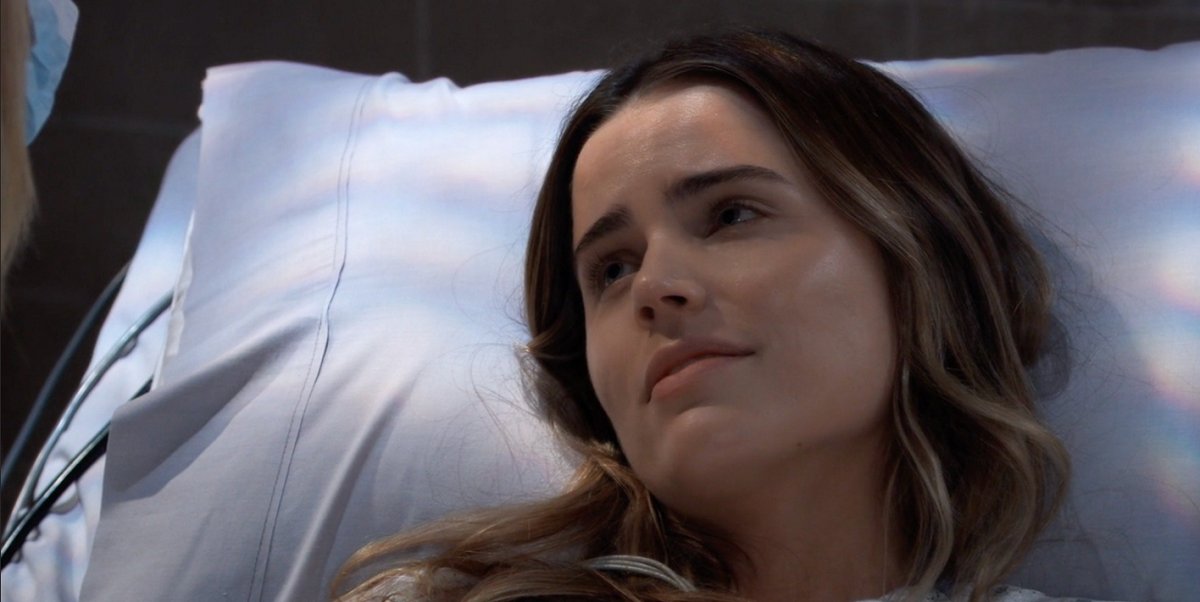 General Hospital (GH) spoilers tease that the time clock is ticking away for Dr. Hamilton Finn (Michael Easton) to find a cure for Sasha Gilmore’s (Sofia Mattsson) increasingly devastating illness this week. The family holds a vigil and prays for a miracle!

In the new General Hospital weekly promo, “Sasha’s Contagion” Finn and Sasha are talking in Sasha’s room at the hospital, which has been set up as an isolation unit. Sasha weakly asks Finn what her chances for recovery are.

Finn tells her honestly that they are in unfamiliar territory, meaning he really doesn’t know, but there is obvious fear that she may not survive. It may be an Avian Influenza virus (bird flu) which is rarely spread to humans, and it may be a mutated version at that! So far, none of the protocols that Finn has tried have worked on Sasha’s illness.

Valentin Cassadine (James Patrick Stuart) and Liesl Obrecht (Kathleen Gati) wait outside Sasha’s hospital room, looking through the window. Nina Reeves (Cynthia Watros) is inside with Sasha, lying beside her in the hospital bed and holding her head in her arms.

"… if all this is the punishment I deserve." #GH pic.twitter.com/xC2Ypeljdt

Nina, and the rest of her family, as well as Michael Corinthos (Chad Duell), are losing hope that Sasha’s illness, caused by the deadly contagion that Cassandra Pierce (Jessica Tuck) injected into Sasha’s grapefruit can be cured successfully.

Jasper Jacks, (Ingo Rademacher), who is concerned about Nina and Sasha, comes to General Hospital and wants an update. Nina loses it as she cries out that her daughter could be dying! Nina is beside herself as Jax looks at her with empathy. She sits on a nearby bench and cries her heart out, while Sasha lays in the hospital room progressively getting worse. Time is of the essence in finding a cure for Sasha.

Valentin and Liesl are still outside Sasha’s room as Nina has updated Jax and is devastated over Sasha’s medical condition. Valentin is upset as he vents to Liesl that Nina would be inconsolable if Sasha were to die. Nina looks pretty inconsolable already, she may totally lose her sanity if the worst-case scenario happened.

In Nina’s mind, thinking her baby was dead after coming out of a 20 year plus coma and then finding her again only to lose her, would be something Nina simply wouldn’t be able to handle! Of course, General Hospital viewers know that Sasha is not really her daughter, but the two have bonded so closely it wouldn’t make any difference to Nina, even if she were to find out they weren’t truly mother and daughter. They’ve in essence, adopted each other!

Meanwhile, Michael looks worried as well, and probably worries if another girlfriend is going to die. It seems Michael has a dying girlfriend curse placed on him! Stay tuned to General Hospital and keep checking General Hospital spoilers frequently for all the latest news, updates and developments!