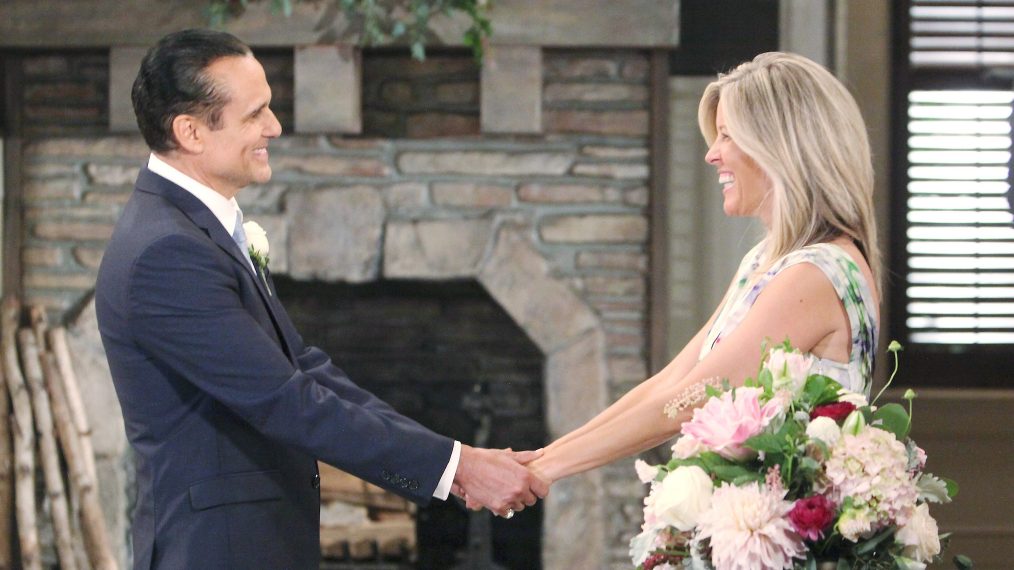 General Hospital (GH) spoilers tease that there are five key takeaways from this week’s GH for fans to watch for!

The Cassandra Pierce (Jessica Tuck) connection is revealed when she sends a selfie of “Sandy Lance” at breakfast with Michael and Sasha in Puerto Rico) to Nina Reeves (Cynthia Watros) who is mad enough to kill her for doing this to her daughter! Nina immediately shows Valentin Cassadine (James Patrick Stuart) and they rush to GH to show Dr. Hamilton Finn (Michael Easton). He will want to involve the authorities, including the Port Charles Police department, which makes both Sasha and Valentin nervous because of their mutual secret.

However, since a crime was committed by Cassandra against a Port Charles resident, he tells his brother Detective Harrison Chase (Josh Swickard), and notifies the appropriate medical entities, namely the CDC of the risk of a possible pandemic of avian influenza, or bird flu, which Finn’s additional tests prove Sasha’s illness to be.

You are cordially invited to watch Sonny and Carly Corinthos say, "I do," again! Their vow renewal ceremony is sure to be the talk of Port Charles.
A heartwarming, new #GH starts RIGHT NOW on ABC! @MauriceBenard pic.twitter.com/ne3wjrWajL

According to the Centers for Disease Control and Protection, It is rare in humans but it can be spread if a person is in contact with infected birds. Infected birds shed avian influenza virus in their saliva, mucus, and feces. Human infections with bird flu viruses can happen when enough virus gets into a person’s eyes, nose or mouth, or is inhaled. This can happen when a virus is in the air (in droplets or possibly dust) and a person breathes it in, or when a person touches something that has a virus on it then touches their mouth, eyes or nose.

The spread of avian influenza A viruses from one ill person to another has been reported very rarely, and when it has been reported it has been limited, inefficient and not sustained. However, since there is always the possibility that the virus could mutate and spread as other influenza viruses have, Finn will be super cautious.

Franco Baldwin’s (Roger Howarth) worries about him, and whether he will ever be himself again. Elizabeth Baldwin (Rebecca Herbst) wonders if she will ever get her husband back, and still has to explain to her younger boys that the Franco they see isn’t himself, literally!

Drew Cain (Billy Miller) flew to Afghanistan and then planned to divert to Ethiopia to get Dr. Andre Maddox (Anthony Montgomery) and put him on a plane and send him to Port Charles, but that plan was foiled by Peter August (Wes Ramsey), under pressure from Shiloh Archer (Coby Ryan McLaughlin) who had blackmailed him by implying threats against Maxie Jones (Kirsten Storms).

Franco truly believes he is pre-2012 Drew and has all his memories along with his personality and instincts, and Navy Seal skills! As for the real Drew, he may not return from his trip, thanks to Peter!

Alexis Davis (Nancy Lee Grahn) will have some interesting experiences this week! Apparently, she wants to try working out her frustrations with some physical fitness, as she drags her friend Diane Miller (Carolyn Hennesy) to a workout class, and later in the week, she’ll be incredibly embarrassed!

Kim Nero (Tamara Braun) will fight feelings for Frankendrew as she continues to try and rush Julian Jerome (William DeVry) to not only move to Manhattan with her but to marry her! He may not want to rush into marriage, wondering if she is still trying to replace her late son Oscar Nero Quartermaine (Garren Lake Stitt) with a new baby! Plus, he has to stay in Port Charles through the closing on his sale of Charlie’s Pub to Olivia Falconeri Quartermaine (Lisa LoCicero)! Spoilers say that she will ignore a call from Elizabeth, and Franco will let Elizabeth down! Later, she will visit Oscar’s Meadow.

That’s all for this week’s Five Key Takeaways for General Hospital. Stay tuned to the show and keep checking General Hospital spoilers for all the latest news, updates and developments!