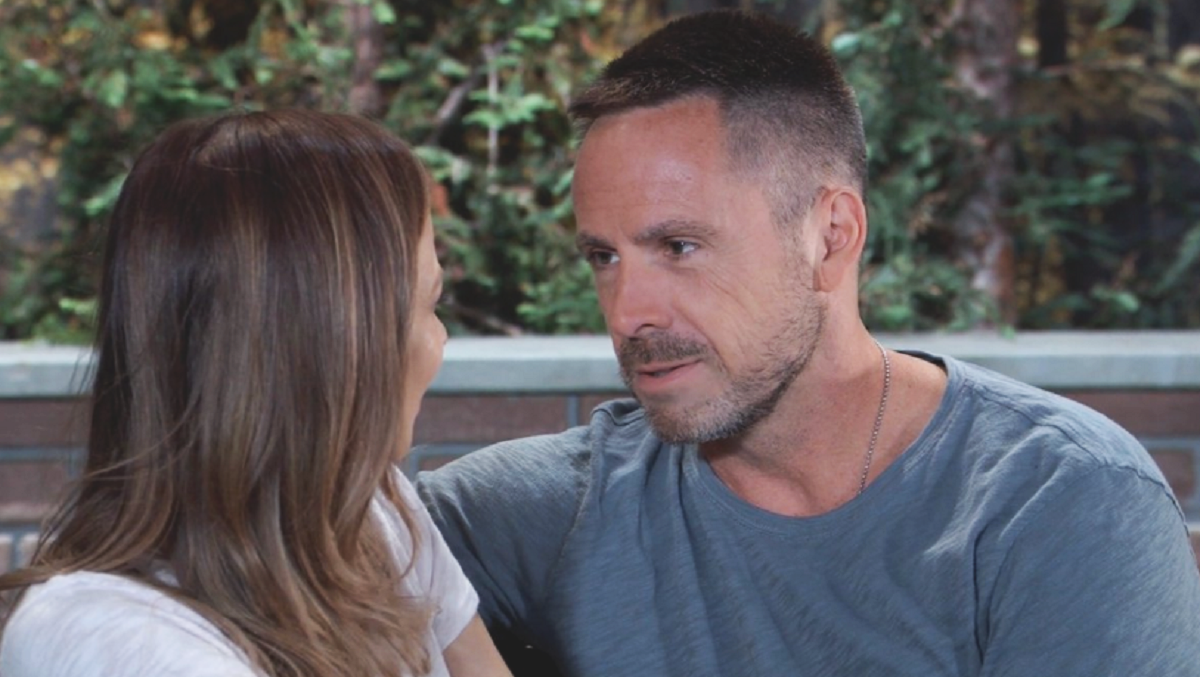 Harrison Chase (Josh Swickard) wants information about Sonny’s warehouse foreman. Sonny and Jason Morgan (Steve Burton) both claim to know nothing about the foreman. Dev Corbin (Ashton Arbab) arrives and says he wasn’t aware of any problems at the warehouse.

Chase leaves and Dev thinks Chase bought the story. Sonny tells Dev that he cannot give the cops information like he just did. Dev needs to remember three words, I don’t know. Carly and Jason think Sonny is too close to this. Sonny tells Dev to tell the cops to direct any more questions to him or Jason. Carly warns Sonny to be careful about Dev.

General Hospital’s Franco answers the door for Liesl Obrecht (Kathleen Gati) who slaps him. Leisl demands Franco snap out of it. Franco wants to know why Liesl slapped him. Liesl says she will get Franco through this debacle. Liesl refuses to harbor Franco’s delusions.

Franco accuses Liesl of being a lunatic. Liesl is stunned the Franco doesn’t remember who he is. Franco offers Liesl a drink. She is upset that she wasn’t called in on Franco’s case. Liesl believes she can find a way to undo this procedure. Franco wants to live as he is. Liesl tells Franco that he worked long and hard to marry Liz. She says Franco should not leave Liz now. Liesl wants him to fight for the life that belongs to him.

General Hospital’s Liz Baldwin (Rebecca Herbst) calls Kim Nero (Tamara Braun) for an update. Epiphany Johnson (Sonya Eddy) stops to check on Liz. Liz breaks down. Epiphany encourages Liz to let her frustrations out. Liz tells Epiphany that she doesn’t want to push Franco further away. Epiphany tells Liz she needs to stop listening to other people and fight for her marriage. Liesl arrives at the hospital for her antibiotics. Franco arrives at Liz’s door as she starts to leave.

General Hospital’s Julian Jerome (William DeVry) joins Kim in Oscar’s meadow. Julian wants to help set Kim up with an office when they get to Manhattan. Kim proposes to Julian. Julian thinks Kim is proposing to make a statement to Franco. He doesn’t want to marry Kim on impulse. Kim agrees that Julian is right. Kim and Julian are at the hospital kissing when Franco walks in and sees them. Julian wait for Kim to finish her appointment and they leave together.

General Hospital Spoilers – Nina Reeves Blames Herself For The Attack

Nina takes the picture to Hamilton Finn (Michael Easton). Finn says this will make Sasha harder to treat. Michael goes to see Sasha. Sasha tells Michael that Finn thinks she could have been diagnosed too late. Finn needs to alert the CDC and law enforcement. Finn insists they contact the authorities before Cassandra tries this on someone else.

Michael and Sasha identify the woman in the picture as Sandy Lance (Jessica Tuck). Nina tells Michael and Sasha that is really Cassandra, a major drug dealer. Michael speaks to Anna about the Cassandra situation. Chase arrives and offers Finn dinner. Finn tells Chase about Cassandra. Nina blames herself for Sasha’s attack. Chase warns Finn to be careful, he could be a target as well. Nina believes Sasha is sick because of her. Sasha apologizes to Michael. Michael isn’t leaving Sasha’s side.

As always, more detailed spoilers and a full collection of pictures for the week in question will appear here on Soap Opera Spy, when there could be more clues and hints over exactly what’s going on.