The Bold And The Beautiful Spoilers: Wednesday, August 28 – Ridge Turns His Back On Brooke – Shauna Visits Flo In Jail, Mom Heartbroken 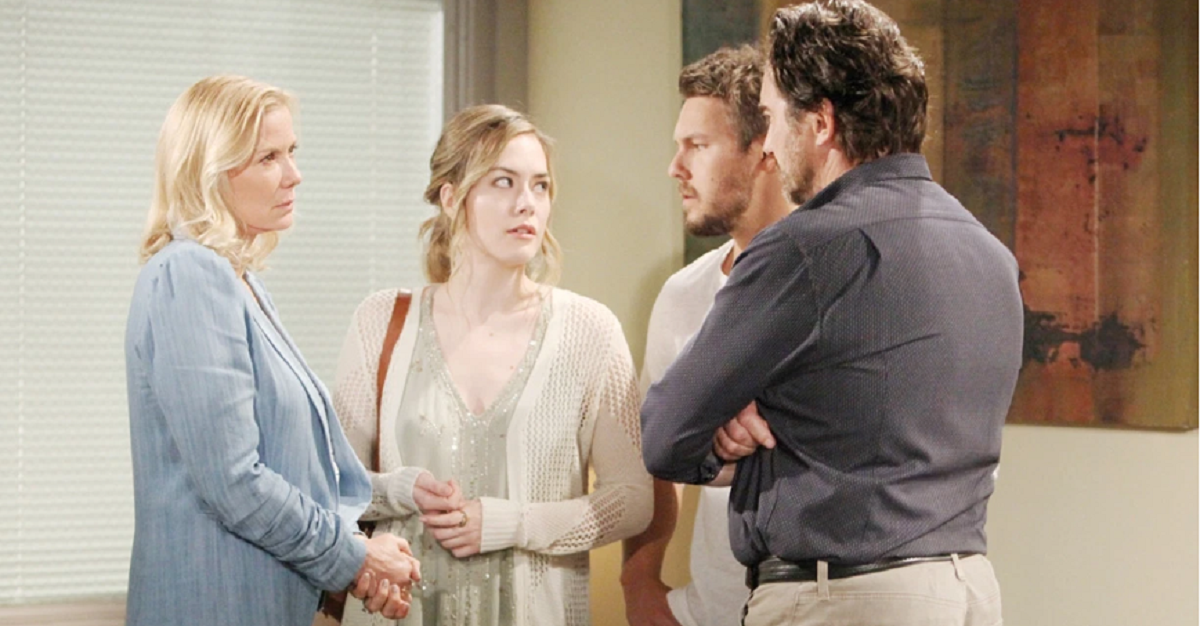 The Bold and the Beautiful (B&B) spoilers for Wednesday, August 28, tease that Brooke Forrester (Katherine Kelly Lang) will be in utter disbelief. As B&B viewers know, she just heard Hope Logan (Annika Noelle) state that Thomas Forrester (Matthew Atkinson) wasn’t actually threatening her while they were standing on the side of the cliff. Of course, this will come as a total surprise to Brooke, who was sure that she saw Hope in imminent danger from a menacing Thomas.

According to B&B spoilers, hearing Hope’s account of what happened out there on the cliff will be infuriating, and he’ll quickly realize what happened. He’ll surmise that Brooke, because of her deep-seated animosity toward Thomas, just assumed that he was going to harm Hope and then she acted accordingly. It looks like Ridge will lay some serious blame at Brooke’s feet, arguing that if she didn’t hate Thomas so much, this never would have happened.

It also appears that Ridge will totally disbelieve Brooke’s account of what happened. As B&B viewers know, Brooke claims that she saw Thomas menacing over Hope and threatening her. But Ridge will likely argue that Brooke just saw what she wanted to see and that her response to the situation was out of proportion to what was really going on.

Look for Ridge to completely turn his back on Brooke and blame her for his son’s current condition. As he waits for word from Dr. Jordan Armstrong (Vincent Irizarry) about Thomas’ injuries, he’ll likely shun Brooke, and he may even order her to leave. But Brooke will want to stay and support her husband. It won’t be a good scene.

The Bold And The Beautiful Spoilers: Thomas Life Hangs In The Balance — His Road To Redemption Begins

Meanwhile, on Wednesday’s new episode of B&B, Flo Fulton (Katrina Bowden) will be adjusting to life behind bars. As B&B viewers know, she was arrested at Hope’s cabin for her role in Reese Buckingham’s (Wayne Brady) baby swap and adoption scam. She’s been in lockup ever since, and Shauna Fulton (Denise Richards) has been beside herself with worry over her daughter’s situation.

Shauna begged Ridge, Brooke, and Hope to have mercy on Flo and not have her arrested, but that just wasn’t in the cards. Flo participated in a fraudulent adoption and she knew about the kidnapping and conspired with the kidnapper. She’s now facing some very serious charges, and she could end up doing hard jail time.

But for the meantime, it seems that she’s just being held in custody pending her arraignment. Whether bail has been set remains to be seen, but it’s pretty clear that neither Shauna nor Flo have the money to post bail even if bail has been set.

Bold And The Beautiful Spoilers: Hope Feels Guilty About Thomas’ Accident – Will She Start To Fall For Him? #bb #boldandbeautiful #cbs #daytimetv

Do you think Hope could fall for Thomas?https://t.co/QIIo18r5Bf

According to B&B spoilers, Shauna will visit Flo in jail, and she’ll be heartbroken to see her daughter behind bars. Shauna has always wanted the best for Flo, and jail certainly wasn’t in the plan for her daughter. Jail’s a rough place, and Shauna will want to get her daughter out of custody as soon as possible, but there won’t be much she can do without the cash to post bail.