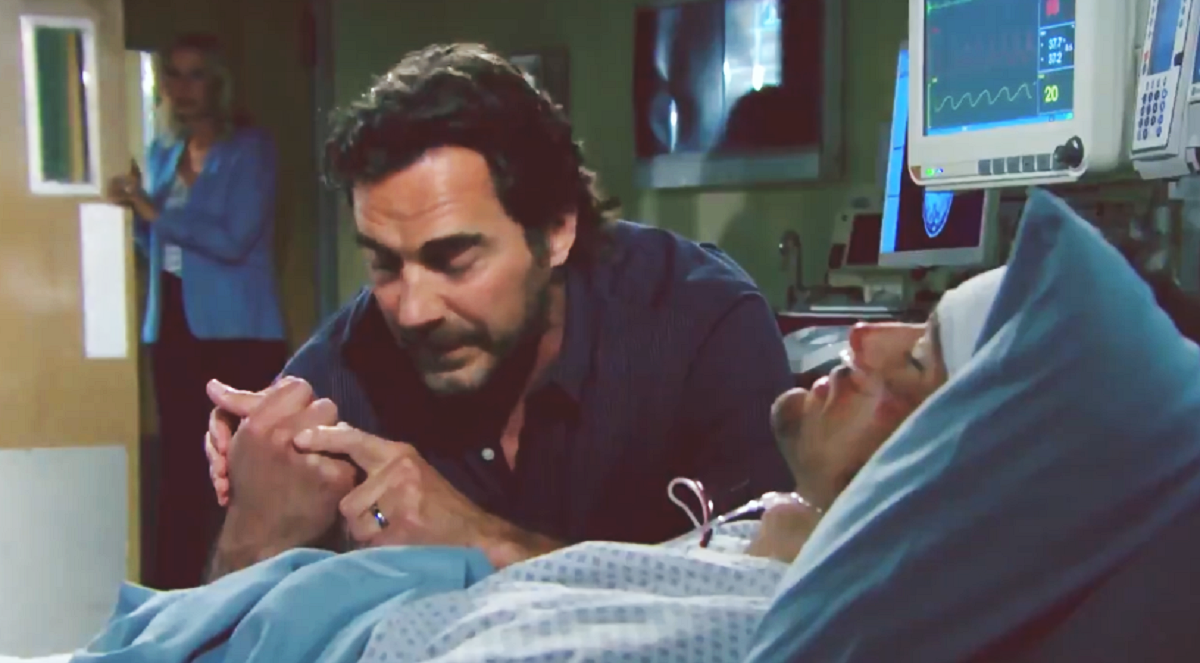 Hope Forrester (Annika Noelle) is seeing life more clearly than she was last week on ‘The Bold and the Beautiful’. Thomas Forrester’s (Matthew Atkinson) fall forced her to shift focus from the deep pain her soon-to-be annulled husband caused her to a different issue, whether or not he’ll live.

Meanwhile, Brooke Forrester (Katherine Kelly Lang) is explaining herself to Ridge Forrester (Thorsten Kaye). Her actions at the cliff house hedge were in defense of her daughter, with Thomas’ reckless state of mind sparking what could prove to be a tragedy.

B&B fans learned that whoever constructed the gorgeous cliff house forgot to put a safety wall in front of, or behind, the hedge. Upon first sight, there appears to be no barrier that prevented Thomas from falling.

One wonders how Steffy Forrester (Jacqueline MacInnes Wood) could have allowed her children, Kelly Spencer (Zoe Pennington) and Phoebe Forrester (Madeline Valdez and River Davidson), who was recently revealed as Beth Spencer, or her nephew Douglas Forrester (Henry Joseph Samiri) in that area? Either she didn’t, or was extremely cautious when she did, as it’s obviously a dangerous spot.

Bold And The Beautiful Spoilers: Ridge Furious When He finds Liam In Thomas’ Hospital Room

Of course, devoted soap fans know that Thomas took a bit of a leap after Brooke put her hands on his upper body area. Most human beings likely wouldn’t have taken that fall, but Thomas needed to be stopped and was written into soapy justice.

Depending upon how Thomas’ life flows from this plot point forward, Ridge holds the potential fate of his wife in his hands. He could tell Detective Alex Sanchez (Jeremy Ray Valdez), who will likely return to the scene to investigate the latest problem the Forrester’s are involved in, that Brooke acted with intent.

Clearly, Brooke hadn’t planned to harm Thomas, as she had no idea where ‘Thope’ would be when she quickly drove to the cliff house. Instead, she responded with parental instinct when initially getting in between Hope and Thomas. If Brooke truly was malicious, she would have pushed Thomas over the cliff immediately upon arriving at the hedge.

Within mere seconds B&B’s writing staff repositioned Thomas away from his villainous path. Now, lying in a coma in the hospital, incredibly still alive, some viewers can push themselves into offering sympathy for this character.

Bold And The Beautiful Spoilers: Hope Feels Guilty About Thomas’ Accident – Will She Start To Fall For Him? #bb #boldandbeautiful #cbs #daytimetv

Do you think Hope could fall for Thomas?https://t.co/QIIo18r5Bf

If Thomas recovers and is genuinely sincere about reforming his life, an additional segment of the audience, along with various B&B characters, will give him a chance. That type of uplifting turn in this storyline would be welcomed by all who believe anyone deserves reconsideration, as long as that person is honestly regretful for past misdeeds and wants to achieve redemption.

This site is a leading source for everything linked to ‘The Bold And The Beautiful’.