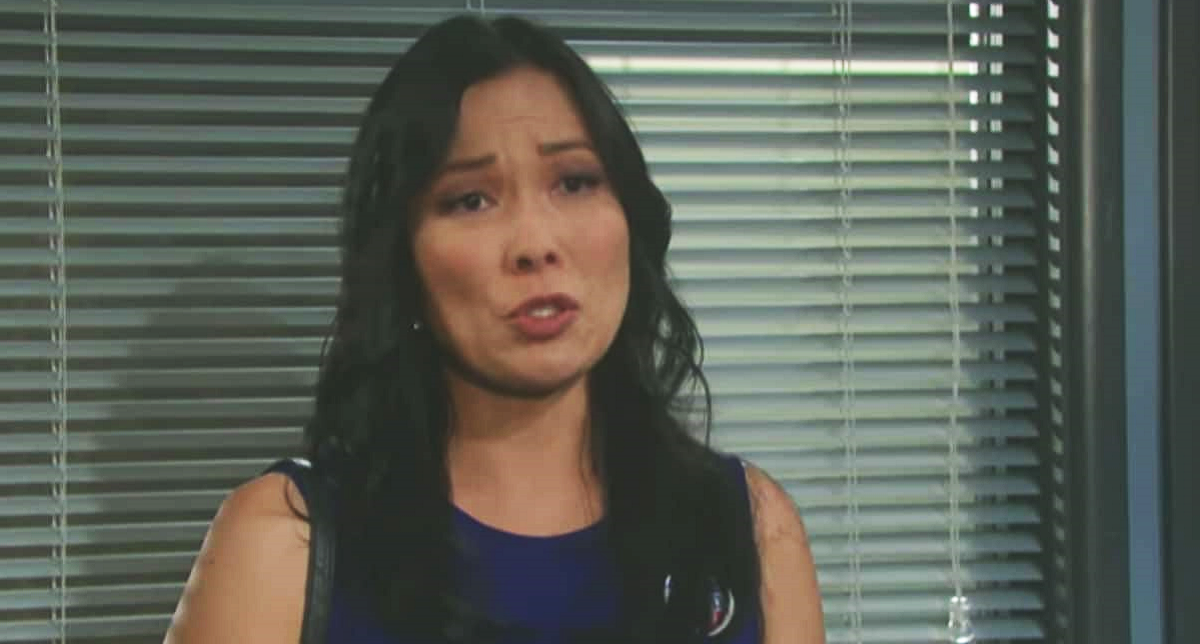 Days of Our Lives spoilers reveal Eric Brady (Greg Vaughan) will make a desperate plea to DA Melinda Trask (Laura Kai Chen). It has to do with Kristen DiMera (Stacy Haiduk), Nicole Walker (Arianne Zucker) and Holly. It is suggested that Trask will block any deals with the blonde villain, which could stall getting the child back with her loved ones.

Everyone has discovered the truth about Nicole Walker. As fans know, Kristen DiMera was wearing a high-tech mask that slipped onto her face like a second skin. This allowed her to roam free around Salem as someone else. However, now the truth is out and people are horrified.

At the police station, Kristen has revealed a lot of information to Brady Black (Eric Martsolf). However, she won’t give up Holly’s location until she gets a deal to avoid prison time.

We know for certain that Eric makes a plea to DA Melinda Trask. The details are still under wraps, but we have a good idea of what to expect. Eric’s main concern is to find Holly. She is Nicole’s little girl, a child that Eric loves like his own. After finding out that Holly is not dead, he will do anything to find her.

Days Of Our Lives Spoilers: Ben And Ciara Come To Julie’s Aid After She Collapses– Will She Survive?

However, if Trask denies a deal for Kristen, the villainess won’t be giving up her location. This is likely what Eric goes to talk to her about, to get her to understand that a child’s life is at stake.

Trask is known to be tough. She doesn’t scare easily and doesn’t like making deals with criminals, especially one like Kristen DiMera. There is a good chance she denies Eric’s request and won’t change her mind. This leads Eric to go look for Holly himself. However, he won’t have to do it alone. Mayor Jack Deveraux (Matthew Ashford) and Jennifer Horton (Melissa Reeves) will join him.

Days Of Our Lives Spoilers – Will Melinda Trask End Up Getting Fired?

Days of Our Lives spoilers hint Jack might have a heart after all. Now that he is away from Eve Donovan (Kassie DePaiva), he is getting closer to becoming the man that Jennifer remembers.

There is a child missing and Kristen won’t give up her location. The Salemites have no idea if Holly is safe or if she is being cared for by monsters. This makes finding her even more urgent. If Trask won’t make a deal with Kristen, then the vicious villainess will keep Holly’s location a secret.

This might be enough to make Jack realize that rehiring Melinda was a mistake. Yes, the district attorney needs to be tough. However, they also need to balance out the needs of victims, especially an innocent child.