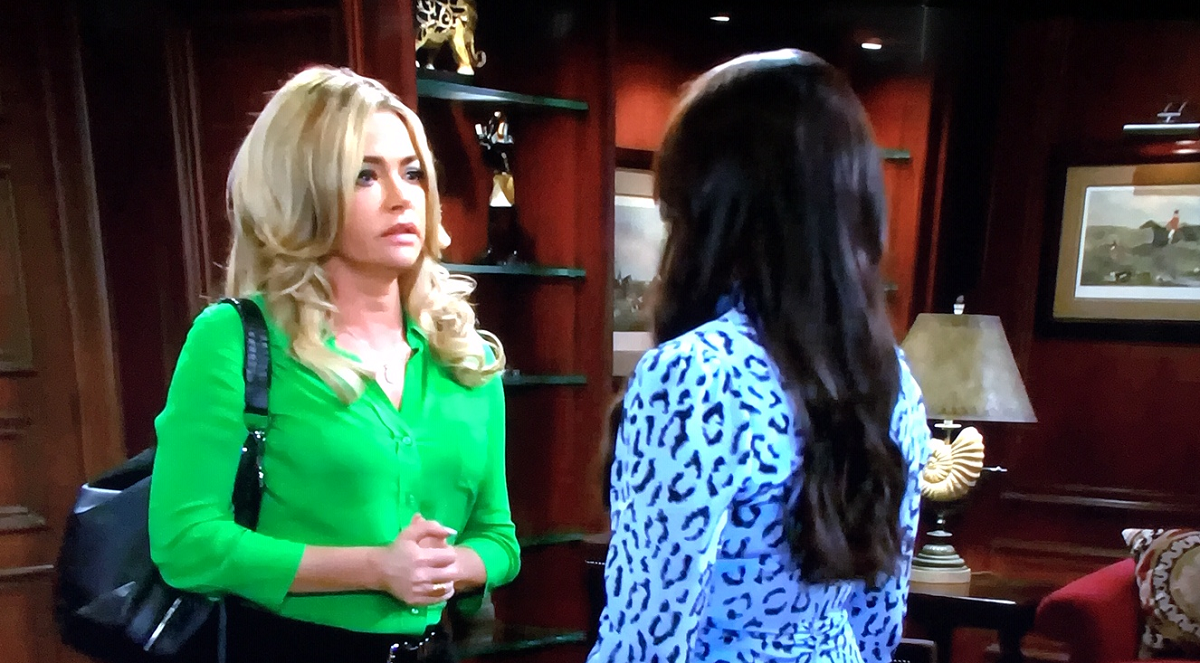 But on Thursday’s episode of B&B, Ridge’s rage will get redirected from Brooke to Liam. As B&B viewers know, Liam is completely disgusted with Thomas right now, and even though Thomas is unconscious and in terrible physical condition, Liam just can’t get beyond what he did to him and Hope Logan (Annika Noelle). After all, Hope and Liam could have gotten Beth Spencer (River Davidson and Madeline Valdez) back far sooner had Thomas just come forward.

Thomas decided to withhold the truth from Hope and Liam, and he threatened anyone else who wanted to tell the truth. Liam can’t imagine himself ever forgiving Thomas, and he’s got a lot of pent-up rage over the whole thing. On Thursday’s B&B episode, Liam will slip into Thomas’ hospital room and talk to him as he lies there unconscious.

Exactly what Liam has to say to Thomas remains to be seen, but he’ll likely blast Thomas for all of the things he did to himself, Hope, Douglas Forrester (Henry Joseph Samiri), and Steffy. He’ll have a lot to get off his chest, and as he’s blasting Thomas for his misdeeds, Ridge will catch him.

Of course, Ridge won’t like seeing Liam berating Thomas in his weakened state, and according to B&B spoilers, Ridge will let Liam have it. He’ll likely demand that Liam get out and not come back, and he might even ask Liam to leave the hospital.

Ridge knows that Thomas made a lot of mistakes and has a lot of blame in keeping Beth from Hope and Liam, but he won’t think that now is the time for Liam to be unleashing on Thomas.

Meanwhile, on Thursday’s new episode of B&B, Shauna Fulton (Denise Richards) will have a major request of Quinn Forrester (Rena Sofer). As B&B viewers know, Shauna recently visited her daughter Flo Fulton (Katrina Bowden) in jail, and it was a harrowing experience for her. She desperately wants to help her daughter, but she can’t afford to post bail or to get Flo a lawyer to represent her.

Shauna then went to see Quinn at Forrester Creations, and she’s asked Quinn for help. But it seems that first Quinn will want to hear what actually went down with Flo and why she and Shauna ended up keeping the secret about Beth from everyone. Shauna will recount the whole story to Quinn, including how Flo agreed to pose as the birth mother for Reese Buckingham (Wayne Brady), whom she made the mistake of trusting.

Quinn will then hear about how Flo got in too deep before she knew what was going on, and how she made the mistake of not coming forward when she knew she should have. Quinn will hear all about how Thomas got involved and started threatening her life, and it looks like Quinn will take pity on both Flo. Shauna will also explain how she advised her daughter to keep quiet so she didn’t risk her standing in the Logan family, and how that turned out to be a big mistake.

Bold And The Beautiful Spoilers – Quinn Forrester Will Offer Her Support

It looks like Quinn will offer some support and understanding to Shauna. She certainly won’t condone what Flo did, but she’ll at least understand why Flo made some of the choices she did. As B&B viewers know, Quinn has her own sordid history, and she’s been offered plenty of forgiveness in the past, so she’ll be willing to offer Flo and Shauna her understanding and forgiveness.

Bold and the Beautiful Spoilers: Will There Be A Custody Battle for Douglas? @celebratesoaps https://t.co/gbtWIW2uSx

Shauna will then again beg Quinn to help her with Flo’s bail and legal representation, but will Quinn even be able to help? As B&B viewers know, Quinn’s husband Eric Forrester (John McCook) is livid about Flo and Shauna’s deception, and he’d never agree to fun Flo’s release from jail or her legal representation. So, will Quinn ultimately go behind Eric’s back and help Flo out?