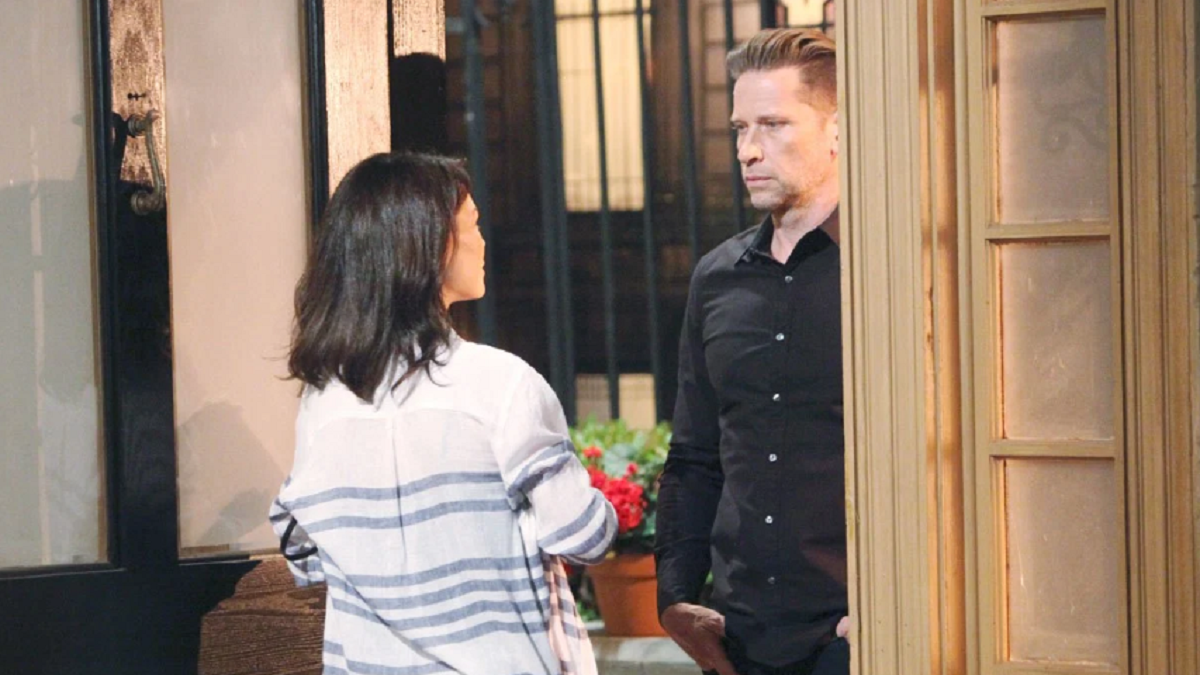 General Hospital (GH) spoilers tease that Elizabeth Baldwin (Rebecca Herbst) might take some desperate measures to keep her husband Franco Baldwin (Roger Howarth) in Port Charles. She will to try to find the man he used to be and bring him back!

On a recent General Hospital episode, after Franco came to Elizabeth’s door and the two had a discussion in which he took off his wedding ring and laid on the coffee table,  Liz made a call to a lawyer.

Viewers know she’s not going to divorce him, so she might need a lawyer to either get Franco declared incompetent and to get his power of attorney. Or she may be looking to get a judicial commitment to a mental institution, or both.

Elizabeth knows that the real Drew Cain (Billy Miller) left for Afghanistan to return some dirty money that Shiloh Archer (Coby Ryan McLaughlin) and Tex Owens made off selling US Navy fuel to enemy insurgents. Drew found in Cameron Webber’s (William Lipton) car. He was going to divert to Ethiopia to bring back Dr. Andre Maddox (Anthony Montgomery) to try to get Franco’s own memories back.

However, with the exit of Billy Miller from the General Hospital canvas and an unsure resolution of the storyline at this time, it may not happen. Peter August (Wes Ramsey) was blackmailed by Shiloh in a recent episode and he made a call to an old DVX contact to stop Drew from getting to Andre and picking him up.

Either a kidnapping or a killing could happen depending on whether GH powers that be are intending to kill off the character or recast Drew. Elizabeth may feel that the best way to get around Franco’s resistance to get back his own memories would be to see if she could get his power of attorney. This would entail having him declared incompetent, which may require a judicial commitment to begin with.

General Hospital Spoilers – A Judicial Commitment May Not Be Possible

A judicial commitment, sometimes referred to as a “psych hold,” may or may not be possible in this situation, because it requires proving that the person is a danger to others or themselves. Liz could use the incident when Franco slugged Detective Harrison Chase (Josh Swickard), but it would be a gray area, since Franco thought he was someone else, rather than having a mental illness or condition of some sort.

Liz may run into the same problem trying to get Franco declared incompetent, so she could get his power of attorney, since it’s technically not Franco, but Drew in Franco’s brain and body! There wouldn’t even be a way to medically or psychologically prove that Franco has DID, or Dissociative Identity Disorder, because “Drew” is not an alternate personality,

Elizabeth and her family, unfortunately, may have a long way to go before Franco is himself again. Stay tuned to General Hospital and keep checking General Hospital spoilers frequently for all the latest news, updates and developments!