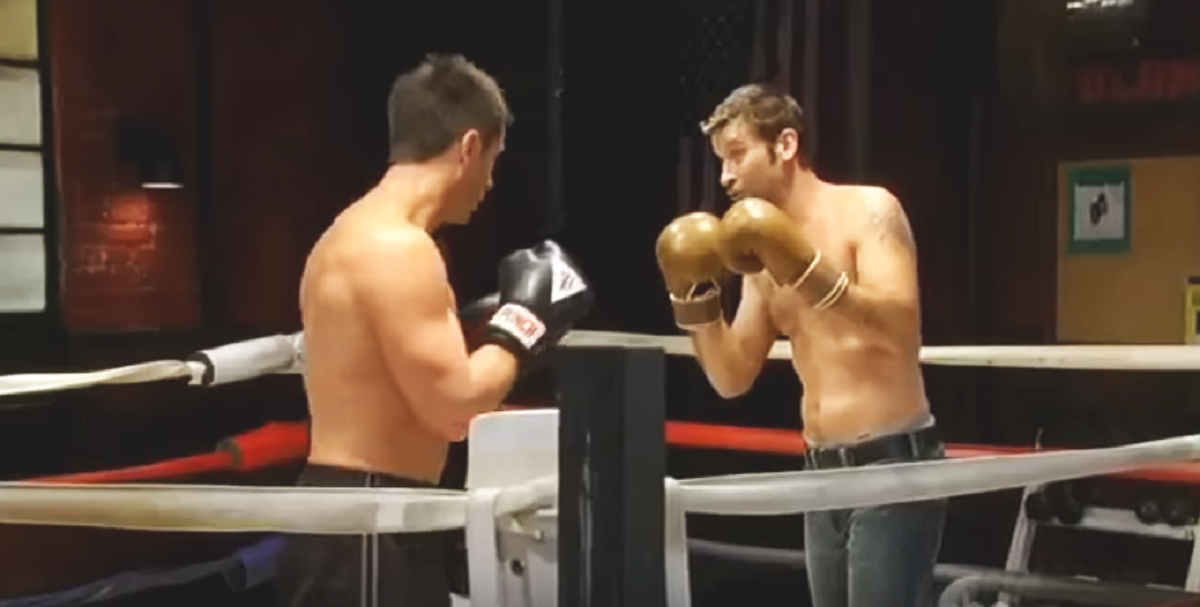 In Tuesday, August 7th’s General Hospital episode, Franco was coming off an elevator and spotted Julian and Kim kissing in front of the nurses’ station. And having pre-2012 Drew Cain’s (Steve Burton) memories and personality, he did not look happy! Viewers could practically see him become possessed with the green-eyed monster of jealousy.

Pre-2012 Drew is a lot different than the real Drew Cain (Billy Miller) viewers have known for the past few years. The real Drew Cain, regardless of what he was like before 2012, would never go out drinking nor would he punch out anyone unless it were in self-defense. However, pre-2012 Drew apparently could get quite combative when pushed to the limit.

Future spoilers indicate that Julian will become defensive – but could it mean in the sense that he will have to defend himself in a fight? Frankendrew has been acting rather punchy these days, and sometimes in a literal sense! Viewers can easily imagine a Frankendrew driven by jealousy to seek out this interloper who has stolen his girlfriend’s heart!

“Drew” definitely never stopped loving Kim, and Kim is trying to fight off attractions to “Drew” as well, and even though she knows he’s not really Drew, he’s Franco with Drew’s memories and his personality up until 2012.

Drew, through Franco, had talked to Kim about their past in a recent General Hospital episode, telling her that he had written letters to her for two years after his deployment; but she had never received them. It is possible that the Navy stopped the letters from going in the mail, but that must have been a strong love for Franco to still feel it as Drew after so many years of no contact.

Unfortunately, the real Drew never wanted to have his old memories replaced for the fear of losing his newer ones. Or Kim and Drew may have reunited and their son Oscar Nero Quartermaine (Garren Lake Stitt) could have seen his parents get together before he died an untimely death at the age of sixteen from a brain tumor.

Julian knows very well what has happened to Franco, because not only had Kim told him, but he’s been in the news as a hero for stepping in and taking the place of his stepson Cameron Webber (William Lipton) when Shiloh Archer (Coby Ryan McLaughlin) had kidnapped him so that Dr. Arthur Cabot (Time Winters) could put Drew’s memories into his brain.

Julian knows that Franco is literally not himself and would probably try to talk him down first, possibly noticing his ankle monitor and trying to make peace with him. But if Frankendrew struck first, Julian would have no problems striking back if necessary.