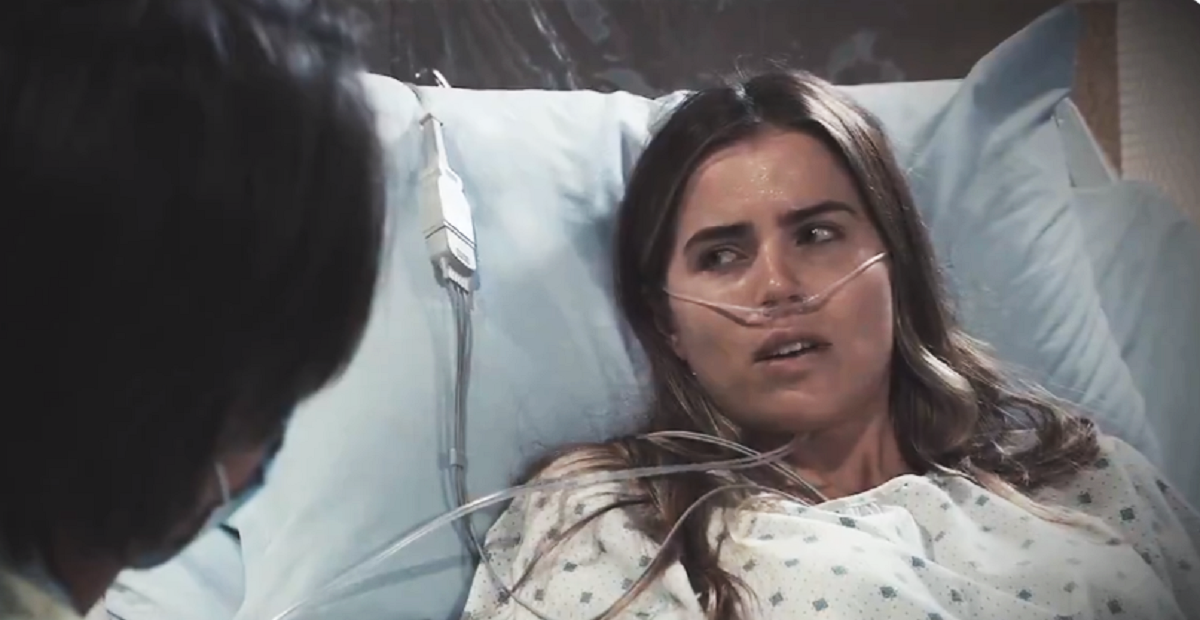 Molly asks about Dr. Byrne. Alexis needs to see what is out there. Molly advises Alexis to sign up for an account on the site. Neil sees Alexis looking at his dating profile as he gets them a drink. Alexis tells Neil she didn’t see any of his details. Neil tells Alexis she can ask anything she wants.

They discuss dating profile questions. Alexis and Neil talk about his music collection. Neil prefers dogs to cats. Then he tells Alexis he needs somebody like her. Neil wants to know if Alexis has found out everything she wants to know about him. Alexis gives Neil a bill on a napkin and leaves.

T.J. Ashford (Tajh Bellows) visits Jordan Ashford (Briana Nicole Henry) at the PCPD. Jordan insists on helping T.J. with school expenses. T.J. is upset that Curtis is taking on other jobs to help him. T.J. is glad that Stella Henry (Vernee Watson) is meeting with her cousin but the D.A. match was much closer. T.J. and talk more about Stella’s match.

GH spoilers tease that T.J. excuses himself to get to his date with Molly. Jordan opens a letter and calls Curtis. Jordan wants to meet Curtis for dinner. T.J. joins Molly and they talk about her article. T.J. brings up Stella’s cousin and says the mix-up doesn’t make sense. T.J. is very suspicious of the ancestry site.

Curtis Ashford (Donnell Turner) promises to find Cassandra Pierce (Jessica Tuck) but he wants to hand her over to the police. Valentin Cassadine (James Patrick Stuart) wants Cassandra turned over to him. Valentin offers Curtis five million dollars to find Casandra and walks away. Valentin and Curtis talk about Cassandra disappearing. Curtis won’t cover that for Valentin. Jasper Jacks (Ingo Rademacher) approaches Curtis and fires him. Jordan joins Curtis who doesn’t tell her he was fired.

General Hospital’s Sonny Corinthos (Maurice Benard) speaks to Nina Reeves (Cynthia Watros) about Cassandra. Jax tries to break up the conversation with Sonny and Nina. Sonny wants to know why Michael Corinthos (Chad Duell) and Sasha Gilmore (Sofia Mattsson) are the targets of a drug lord. Jax wants to know the connection between Nina and Cassandra. Sonny is on it and hopes Sasha pulls through.

Jax tells Nina that Curtis was a plant. He wants to know what Curtis was looking for on him. Michael and Valentin arrive and Michael goes to visit Sasha. Jax is in his office changing the locks. Valentin asks how much Jax knows, Nina says all of it. Valentin wants Nina to stay away from Jax. Nina believes that Jax has never met Cassandra. Curtis calls Valentin and tells him Jax fired him. Curtis wants to talk to Valentin more. Sonny and Jax agree to share information. Sonny warns Jax that Nina is hiding something.

Michael tells Robert Scorpio (Tristan Rogers) that he might be able to find Cassandra. Michael thinks Cassandra would have to be in a limited number of places that have the drug she needs for care. Robert says this is the best lead they have had in months.

Hamilton Finn (Michael Easton) is with Sasha. Finn needs to start another round of antibiotics. Finn tells Sasha about his illness and his cure. Finn wants to know if Sasha is a fighter. Sasha promises not to give up on Finn. Michael tells Sasha she looks better already. Sasha calls Michael a liar. Michael offers to make calls for Sasha if she needs him to. Michael wonders why Sasha deflects when he asks about her past. Michael tells Sasha he is in it for the long haul. Sasha promises to tell Michael the whole story when she gets out of the hospital.

Hayden Barnes (Rebecca Budig) calls to check on her daughter before she joins Alexis and Molly and talks about Finn. Molly has to work on her Cassadine article. Alexis doesn’t know why Molly wants to acknowledge the Cassadine connection.

Hayden offers to talk to Molly about Wyndemere. Hayden is looking at a cactus when Finn arrives and asks about her picture. Hayden claims that Aiden Spencer made the painting. Robert interrupts Hayden and Finn and threatens Finn if he hurts Anna. Robert needs Finn to help track down Cassandra. Finn suggests Robert check Bolivia.