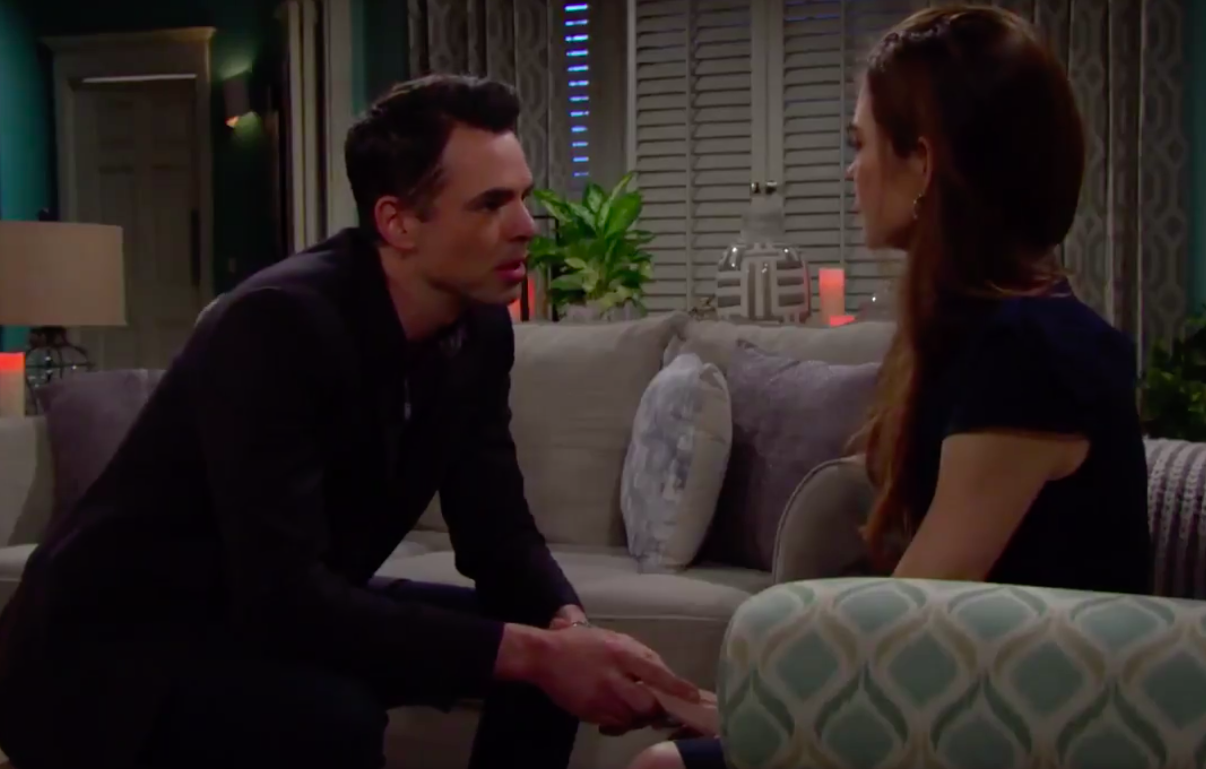 The Young and the Restless (Y&R) spoilers for Friday, August 30, tease that Chloe Mitchell (Elizabeth Hendrickson) and Kevin Fisher (Greg Rikaart) will hide Billy Abbott (Jason Thompson). At a cabin, Kevin and Chloe discuss how they can’t take Billy to the hospital. He crashed after trying to mow down Adam Newman (Mark Grossman), so Chloe’s made him a splint for his leg and wants to help him work through his mental issues.

Billy wakes up briefly and he gets aggressive, but Kevin uses a tranquilizer on him. He also receives a text that reveals they’re finally free. Kevin and Chloe plan to pretend everything’s normal; they have to act like there’s nothing to hide. Meanwhile, Adam fills Phyllis Summers (Michelle Stafford) in on the incident when she visits his penthouse. Phyllis promises she’s innocent, but she has some ideas on the guilty party.

After Phyllis mentions Billy as a possibility, Adam shuts down the suggestion. He didn’t see who tried to hit him or who pushed him out of the way, but he doesn’t believe Billy was involved. He’s also ruled out Kevin. Phyllis contends that it must’ve been Victor then and convinces Adam his father would be capable of the cruelty.

At the ranch, Victor shows off his protective side with Summer Newman (Hunter King). He warns her about Adam’s dangerous game and worries about what’s next. Later, Adam confronts Victor about the showdown on route 7. Victor’s confused, but he eventually gets the picture and assures Adam it wasn’t him. He notes that he wouldn’t have used Adam’s mother’s memory like that. Victor feels she was a good person unlike Adam, who she’d be ashamed of now.

Adam fires back about hating Victor and hurls a chess set into the floor. Once his son is gone, Victor gets on the phone. He wants his minion to find out everything he can about Adam nearly being run over. At the Grand Phoenix, Abby Newman (Melissa Ordway) is pleased over the new lounge. She wows Chelsea Newman (Melissa Claire Egan) with it before Phyllis arrives to blast them.

Phyllis is upset that they’re keeping the name when SHE’S the grand phoenix. She insults Chelsea and Abby before Theo Vanderway (Tyler Johnson) shows up with Zoe Hardisty (Anna Grace Barlow). Phyllis notes that they were muscled out, but Abby insists Phyllis was the only one fired. Theo tries to give Phyllis a pep talk before Summer struts over. Phyllis is irritated to learn her daughter will be at the event to help promote it, so she stomps off.

Theo tries to ease Summer’s mind about her mother’s disapproval. He gets rid of Zoe before inviting Summer to be his date for the opening-night festivities. Summer brings up Zoe and how Theo’s keeping her around. She thinks Theo intends to cause drama since Kyle Abbott (Michael Mealor) and Lola Abbott (Sasha Calle) will be on hand for the bash.

At the coffeehouse, Chelsea is floored by the sight of a very much alive Chloe. She threatens to call the cops, so Chloe reveals she was already taken into custody. Chelsea isn’t pleased about the legal maneuvering that’s helping Chloe avoid consequences. Despite Chloe’s apologies, Chelsea can’t get past the pain her former pal caused. She insists there’s no hope of repairing their destroyed friendship.

At Society, Phyllis is more fired up about revenge than ever. She commiserates with Adam about their latest woes and insists it’s payback time. Adam wants to make sure they strike on a personal level. He wants vengeance to have long-lasting effects on their targets. Adam comments on Victor’s rare blood disease and how his dad’s cheating death once more. He’d like to show Victor that he isn’t invincible.

The Young and the Restless spoilers say some fantastic scenes are coming up. We’ll give you updates as other Y&R news and rumors emerge. Stay tuned to see what’s ahead in Genoa City.