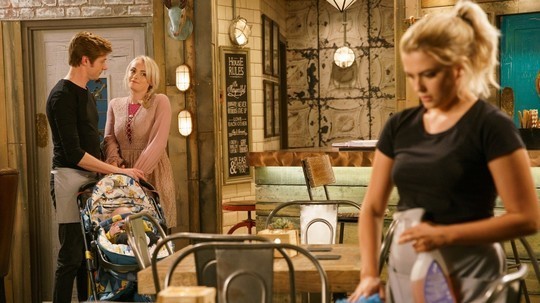 Say it isn’t so! Coronation Street spoilers indicate that Sinead Tinker (Katie McGlynn) will soon be saying her final-goodbyes and yes, it will be as dramatic and as heartbreaking as you can expect. Here’s what you need to know.

Sinead On Her Death Bed

As many fans know, Sinead knows that she doesn’t have much time left as her cancer has spread. She’s on her death bed and wants to make the best of what she has left. Unfortunately, her husband isn’t helping her at all. That’s because Daniel Osbourne (Rob Mallard) has been too busy spending time with Bethanny Platt (Lucy Fallon). The two have been carrying on an affair behind Sinead’s back.

Coronation Street Spoilers: Eileen Has A Tough Decision To Make

Even though Sinead’s cancer had been in remission at one point, it has turned its ugly head once again and now Sinead slowly but surely dying. And according to actor Rob Mallard, his character is going to be left devastated by his wife’s death.

Even though there was a ray of hope during a very dark time for the couple, Daniel will soon be faced with the task of having to say good-bye to his wife. Rob said, “He’s had to be the most positive one. Sinead is suffering to an almost unimaginable extent, so he really has no choice because she is his world. Without a doubt it’s a coping mechanism, it’s also very British and very polite to ‘keep calm and carry on’ even in the face of death, and I think Daniel is due a lot of credit for that.”

Sinead Knows About The Affair?

Coronation Street spoilers also tease that upcoming scenes will see more of Daniel and Bethany together. Clearly, it will be very hard to root for the character knowing that he is two-timing his dying wife at the same time. But then again, different people grieve in many different ways.

There’s also a very good chance that Sinead might pick up on the chemistry between Daniel and Bethany and will have something to say about it. Of course, fans will have to tune in for all of the action!