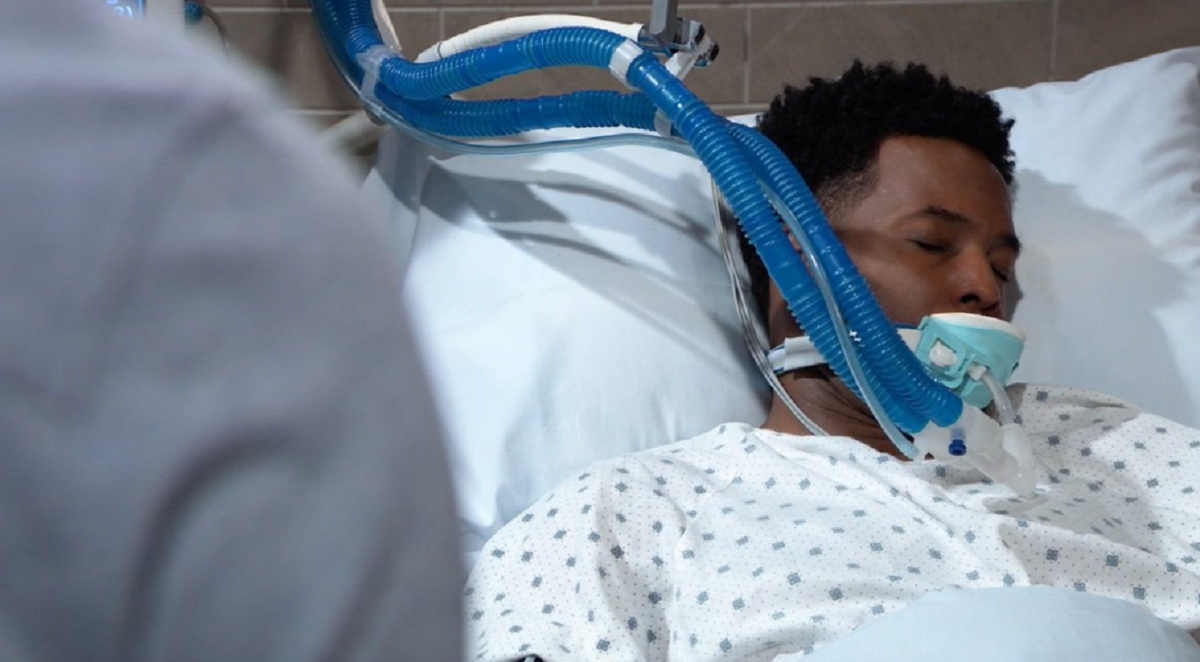 Jordan questions if Curtis Ashford (Donnell Turner) has spoken to Drew Cain (Billy Miller). Jordan wants Andre woken up so she can speak to him. Mac checked the video footage.

Andre got out of the driver’s seat and stumbled into the hospital. Mac and Jordan being Jason Morgan (Steve Burton) in on the investigation and tell him Andre was stabbed.

Maxie tells Mac that the most important part is him being there for her and the kids. She doesn’t want Mac in danger. Felicia asks about Shiloh’s case. Mac wants to cross-exam Shiloh Archer (Coby Ryan McLaughlin). Jordan calls Mac to GH for a meeting. Peter seems surprised to find out that Andre is back in town. Peter leaves shortly after Mac. Felicia orders Mac to back off of Peter. Peter slips into Andre’s room when no one is watching.

General Hospital spoilers state that Jason stops by with a gift for Jake Webber (Hudson West). Liz Baldwin (Rebecca Herbst) talks about Franco Baldwin (Roger Howarth) being gone. Jason thinks it is probably hard to get used to, Liz isn’t going to get used to it. Liz offers Jason a glass of water. Jason offers to help any way he can. Jason apologizes for Liz getting caught in the middle of Shiloh Archer’s (Coby Ryan McLaughlin) fall out.

Jason wants to know what Liz will do if she is wrong about Franco returning. Jason tries to tell Liz that Andre might not be able to fix this. Jason tells Liz she might have to prepare herself for disappointment. Liz accuses Jason of wanting that to be his dream come true. Liz rants at Jason over not accepting Franco. Jason tells Liz he tried to speak to Franco again.

General Hospital’s Cameron Webber (William Lipton) and Trina Robinson (Sydney McKayla) are in the park. Trina talks Cameron into going for ice cream. Franco and Kim are kissing in the park. Trina and Cameron witness the kiss. Kim pulls away from Franco and tells him this is wrong. Franco tells Kim he is way more Drew Cain (Billy Miller) than Drew is. Kim tells Franco that Oscar Nero (Garren Stitt) shares none of his DNA. Cameron is furious that Franco is making out with Kim.

Franco wants Kim to leave with him as soon as the monitor comes off. Franco doesn’t want to lead Liz to believe Franco will come back. He doesn’t have a connection with Liz or her family. Franco only has a connection with Kim, she is his family. Kim tells Franco that she loves Julian. Franco wants to know who the love or Kim’s life is. Franco points out that Kim didn’t say, Julian. He tells Kim she will never stay with Julian knowing he is out there somewhere.

Drew is leaving as soon as the monitor is off. Cameron confronts Franco when Kim leaves. Cameron begs Franco to come back to Liz and try to work things out. Franco refuses because that guy is gone. Cameron is glad Oscar is dead so he doesn’t see Frankendrew. Oscar would not think it was ok that Franco bailed on his wife and stepkids. Franco talks to Oscar and apologizes for not being who he wanted him to be.

General Hospital’s Alexis Davis (Nancy Lee Grahn) arrives at Charlie’s Pub and tells Julian Jerome (William DeVry) the sale is off. Julian blames Olivia Quartermaine (Lisa LoCicero) for the sale not going through. Alexis says this is only delaying the sale for a week. She asks if Julian is that anxious to leave town. Alexis offers to speed up the process.

Julian is surprised he gets any time with his family as it is. Lucas Jones (Ryan Carnes) arrives and Julian shows him the trust he has set up for Wiley. Lucas wishes he could feel good about the trust. Lucas thinks it is sad that Julian believes his money is more important than his presence in their lives. Kim reveals she isn’t in that big of a rush to leave town.